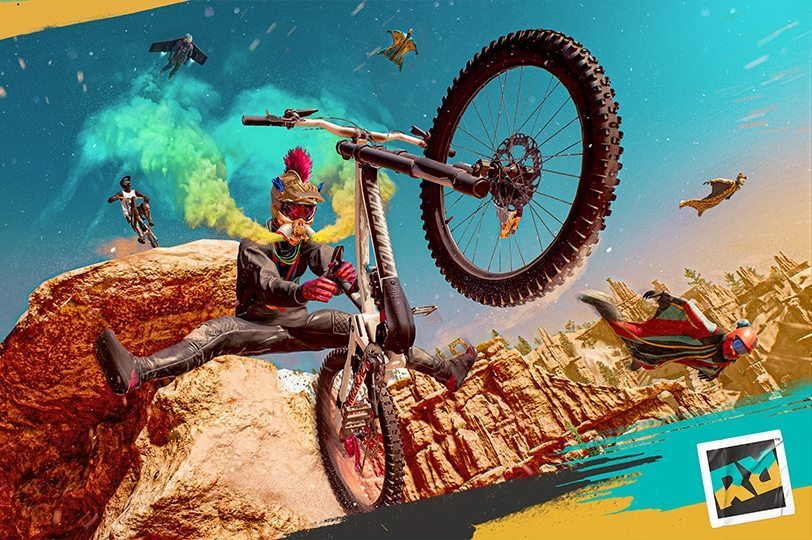 On paper, Riders Republic from developer Ubisoft Annecy sounds like the perfect experience.

That paper has Ubisoft, open-world extraordinaire, tackling extreme sports by letting players flip through mountain biking, skiing, snowboarding and wingsuit and jetpack flying at a moment’s notice in the middle of a massive multiplayer sports game.

And despite some big faults, Republic sticks the landing while effectively being the first game of its kind. The action is fun at every turn, and thanks to some smart overall systems, the game could develop a massive community that lasts for a long time.

Republic isn’t going to throw its weight around in Game of the Year conversations, but sleeper hit of the year seems within range.

Republic will earn a “jack of all trades, master of none” reputation, and that is 100 percent fair.

That doesn’t mean it isn’t a blast to play, though.

Players drop into the world and get to traverse a wicked combination/mashup of seven national parks on bikes, through snow or even through the air. The game begs the player to do whatever they want in the process, whether it’s jetpacking as high as possible and performing a ton of BMX tricks on the way down or skimming mountaintops close enough to get a shave like Iron Man.

Luckily, it’s easy to switch between activities. In fact, it’s pretty much like pulling up a weapon wheel and picking a new gun or item in any other game—pop open a wheel and swap out that bike for, say, a jetpack. Boom. Done.

If there’s a setback, it’s that the control schemes and overall feel aren’t always the tightest, especially on bikes. An average rewind feature doesn’t help things, as the amount it rewinds (while nobody else in a race rewinds) feels finicky.

But after some getting used to the controls and responsiveness of it all, Republic is still a blast. Yes, other games have done these individual parts much better, but nothing has ever let players do things like this.

Republic starts small, letting players unlock little winding courses for snowboarding and bike paths, plus some of the jetpack-based stuff. But before long, it unearths a staggering amount of bigger, wilder events that open up the game and massive world in impressive, if not intimidating, ways.

Difficulty ticks up the more a player progresses, though it’s never too much. This is very much a casual game where luck tends to play a role in events much more often than outright skill.

Republic gets creative with difficulty for an individual event too. Players can choose from one of four levels of difficulty, and based on that, the game will populate the event with ghosts of players from the appropriate skill levels.

And while individual events are fun, especially when they ask a player to hop between modes of transport on the fly, the mass races might be the highlight of the game.

These gigantic events happen every 30 minutes and leave players scrambling to get to them within minutes. Then it’s off to the races in a hilarious, wacky event boasting 64 players.

Fair warning: These won’t be for everyone. They’re chaotic and messy and reminiscent of big-player events in Grand Theft Auto Online. It’s nearly impossible to see where a player is at the start of one of these amid 63 other players, and the game’s collision design sends the player flying off in unpredictable directions.

The key, of course, is to be laidback. That applies to the entirety of gameplay too. Even the more competitive players will probably ease off in this one, as the game never takes itself too seriously and effectively nudges the player in that direction too.

Republic is bright, colorful and downright outrageous. It’s somewhat reminiscent of the color schemes found in Far Cry New Dawn, and that’s not a bad thing.

The world itself is as varied as it gets given the whole national-park mashup thing. In a matter of minutes, players can go from canyon-lined deserts to lush forests and right up to bright, snow-capped mountain peaks. It all looks great and has the necessary audio complements to make for a great experience.

But if there’s a recognizable Ubisoft color scheme for these sorts of things, there’s also a well-established, expected bit of corny dialogue to go with it. The chatter from characters is straight-up banal, and the soundtrack, boasting loads of Green Day and The Offspring, is outdated, to say the least. The saving grace is the option to loop in Spotify.

The implementation of other real players in the world is inherently cool and immersive. While the biggest race has a 64-player cap, there are hundreds of players (or their ghosts) in a player’s session. So while participating in a snowboarding event, for example, players will see others ripping overhead in a jetpack event, giving serious depth and immersion to the whole world. In what might otherwise feel like slapped-together events for the heck of it, the so-called Republic does end up feeling like a real, lived-in place.

This has another important detail to consider: There are no massive waits in a lobby or sitting around waiting for other players. Player population of the game as a whole shouldn’t be a problem. If there aren’t enough real players for a race, the game will drop in some player ghosts. The difference between real person and ghost is negligible, all things considered.

Each race is peppered with details like a real spectator sport. While flying fast and high during a rocket race in a canyon, for example, players will see and sometimes come close to on-foot onlookers along the ridges.

There’s also a wealth of presentation options. Chief among them is a first-person mode. Hopping into first-person does create one of the best senses of speed found in video games today, especially during things like downhill events on bikes or skis.

On the presentation front, it isn’t all perfect, which is to be expected from a world this gigantic. There is a ton of pop-in, especially when traveling at high speeds. But again, if that’s the one big hiccup in this category—and it’s a minor one that doesn’t typically affect gameplay—it’s hard to complain given the scale of this game.

The gameplay is so fun, the ability to switch between modes of transport on the fly is handy and the world is so impressive that fast-traveling to a destination never crosses a player’s mind. It’s sort of like the web-swinging in the spectacular Spider-Man games of the past few years—players can fast-travel, but when the transportation itself is this fun, why would they?

Republic is swimming in a ton of features and menus that will feel intimidating. But luckily for it and its players, most of it can go ignored for the sake of the fun out in the actual world.

Mission (race) variety is a huge plus, at least. Even in the BMX section, there are traditional races, trick events, stunts, downhills and funny side missions. Players can spend a lot of time in menus trying to plot out what to unlock, how and what to do next or they can just go with the flow.

Variety is also the name of the game when it comes to track design for events. Keep in mind that the early hours of each career path feature pretty vanilla tracks. Think of it like a tutorial of sorts—Republic starts to take off the proverbial gloves once it feels like players have progressed enough. That’s when some of the best, most challenging and most memorable tracks start to feature in events.

Progression is handled well. Players can and will tackle achievement and unlocks for, say, biking specifically. But they will also pour experience into overarching career and season-long progression systems along the way too.

Republic doesn’t force players into doing any one particular thing or penalize players for choosing how they want to play. It’s nice to have that recognized—some players might love the biking and snow events but hate the flying—and vice versa.

There’s plenty to do out in the world that will keep a player’s attention away from all the menus too. As they progress, players will stumble upon collectibles, photo opportunities, stunts and quite a bit more to fill their time outside of merely racing events.

That said, it’s easy to fall into a habit of checklisting off as many events as quickly as possible. But that’s a testament to how fun they are—and the game design and technical performance itself. Load times are small, if there at all, and there’s little wait for other players because of the ghost system.

For those who do want to dive into the menu stuff, players can fiddle with sponsors, season-long goals, tracks and other items to buy. There is, as expected, a hefty microtransactions store for cosmetics. It does feel like Republic gets stingy with the cosmetic rewards, which creates a pretty disappointing outlook on that front given the game leans so heavily into making unique characters to complement this wacky festival.

But also impressive on the technical front is that the game features not only crossplay but also cross-progression. Picking up on a console where a player’s character left off on PC or vice versa will come in handy, and this will only help with player count over the long term.

Republic figures to have long legs. The immediate population of events with ghosts is a big reason why. But even bigger, perhaps, is the community creation tools that let players dream up their own events throughout the world and then share them online. Given the world and tools available, it won’t be long before the creative side of the playerbase comes up with some jaw-dropping events and routes.

Riders Republic is one of the most interesting games to come out in years.

It’s a delight to pick up and play for any and all skill levels. So strong is the gameplay loop, so lived-in is the sense of immersion, that many of the faults go long forgotten while out just having fun in this massive world.

Thanks to some creative design decisions, there’s a strong foundation for Republic to quickly develop a large community that sticks with the game for years. Some of the biggest complaints are easily addressed over the game’s lifespan too. And as it undoubtedly dominates its new-found niche, it’s bound to spawn at least a few copycats.