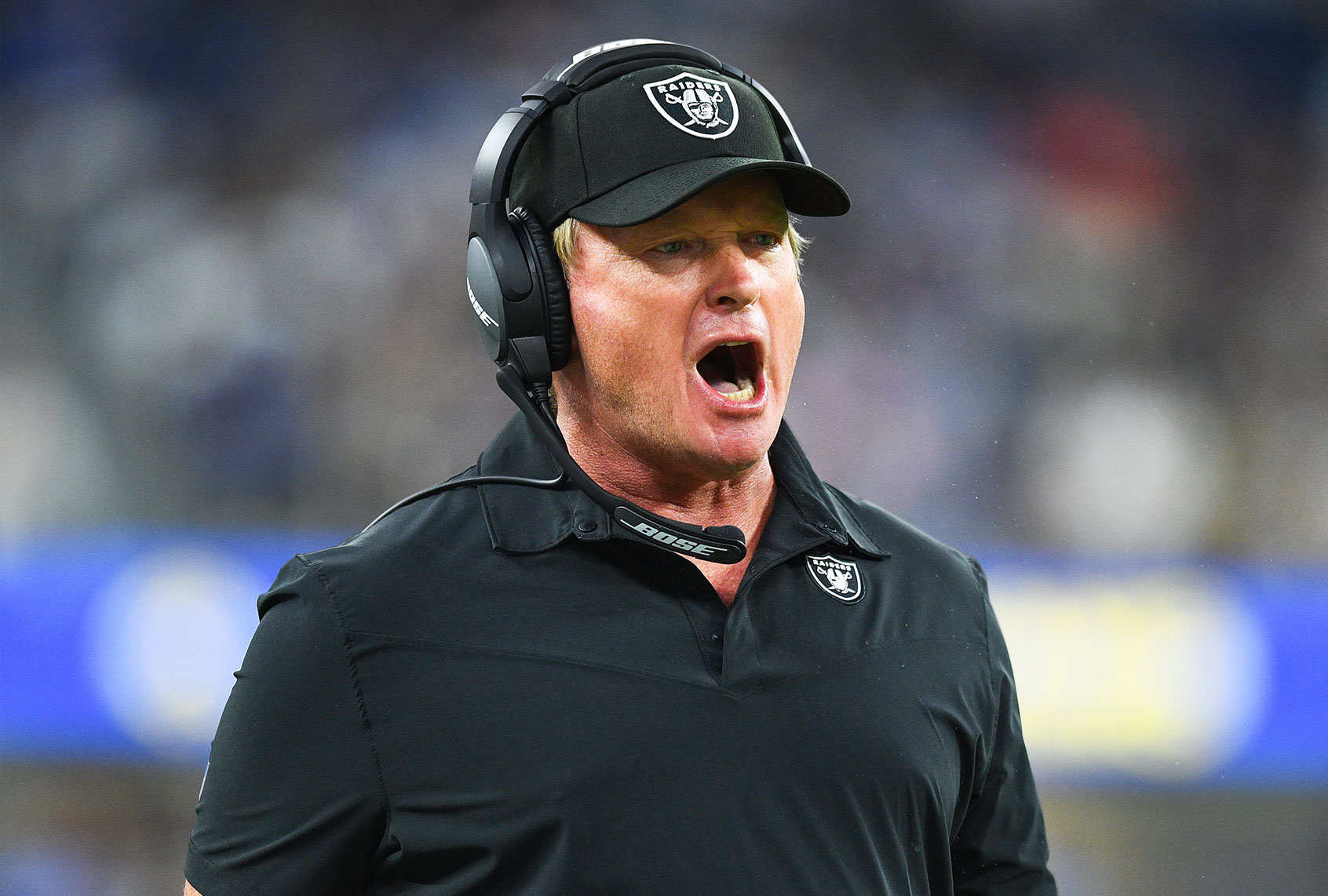 Right-wingers are rushing to defend Raiders head coach John Gruden following his resignation amid a series of reports that Gruden spoke in racist, sexist, and homophobic terms spanning roughly a decade.

Jesse Kelly, conservative talk radio host of “The Jesse Kelly Show,” suggested that the push for Gruden’s dismissal was led by “a bunch of lying, whiny pretenders in this country.”

“That’s the funniest/saddest thing about that whole business,” Kelly tweeted. “60% of America and 99% of the NFL not only think like Gruden does, they’ve all sent emails/texts like that.”

“Let’s see the emails & texts of [NFL Commissioner Roger] Goodell & every NFL owner/exec,” echoed Donald Trump Jr. “We must find out if they’ve ever said anything wrong, shared a controversial thought, or held an opinion that wasn’t PC. No statute of limitations. We can’t allow them to hide behind their white privilege.”

“Ray Lewis was charged with a double murder, the suit he wore the night of the murder mysteriously disappeared, he pled guilty to obstruction of justice and settled with the victim’s families,” tweeted Newmax TV host John Cardillos. “He played a full NFL career. John Gruden sent some off-color emails 10 yrs ago.”

Gruden’s emails first came under the league’s scrutiny this summer as part of a broader investigation into the Washington Football Team. In reviewing roughly 650,000 emails from 2011 to 2018, NFL executives unearthed a number of objectionable emails sent by Gurden to former Washington executive Bruce Allen and other executives, wherein Gurden – then an ESPN color analyst – used derogatory language when speaking of Goodell and the league’s players.

In one 2011 instance first reported by The Wall Street Journal, Gurden described DeMaurice Smith, the executive director of the NFL Players Association, with an explicitly racist trope, saying that “Dumboriss Smith has lips the size of michellin tires.”

In a different exchange from 2014, Gruden called the NFL commissioner a “faggot” and a “clueless anti football pussy” for apparently expediting the drafting of Michael Sam, the league’s first openly gay player.

On Monday, Gurden – who served a brief stint as head coach of the Raiders from 1998 to 2001 and rejoined the team in 2018 – resigned following immense pressure from both league players and officials.

“I love the Raiders and do not want to be a distraction. Thank you to all the players, coaches, staff, and fans of Raider Nation. I’m sorry, I never meant to hurt anyone,” he said in a statement released by the team.

Though calls for his Gurden’s resignation were swiftly met, the NFL has over the decades notoriously struggled to hold its players, coaches, and executives accountable for ethical lapses.

Over the years, the league has repeatedly failed to discipline its players for domestic and sexual abuse against women, even when it comes to incidents involving the NFL’s own cheerleaders, according to the Times. The league has also reportedly waged a decades-long effort to suppress a growing body of scientific evidence linking player concussions to degenerative brain disease.

More recently, the league has been thrust into the political spotlight as players have taken increasingly public stances against issues of social justice.

In 2016, Colin Kaepernick, then the quarterback of the San Francisco 49ers, abruptly became a free agent after kneeling during the national anthem in protest of the country’s U.S. police brutality and racial injustice. He remains unsigned by any team in the league. And this year, the NFL came under fire for its practice of “race-norming” – a statistical trick that yields lower concussion settlements for Black players by assuming that they have lower baseline level of intelligence than their White counterparts.

This year, the NFL has shown a relatively pronounced intent to rebrand. In September, the league announced that it would be letting players emblazon social justice messages onto their helmets and has also pledged to commit $250 million to combat systemic racism.