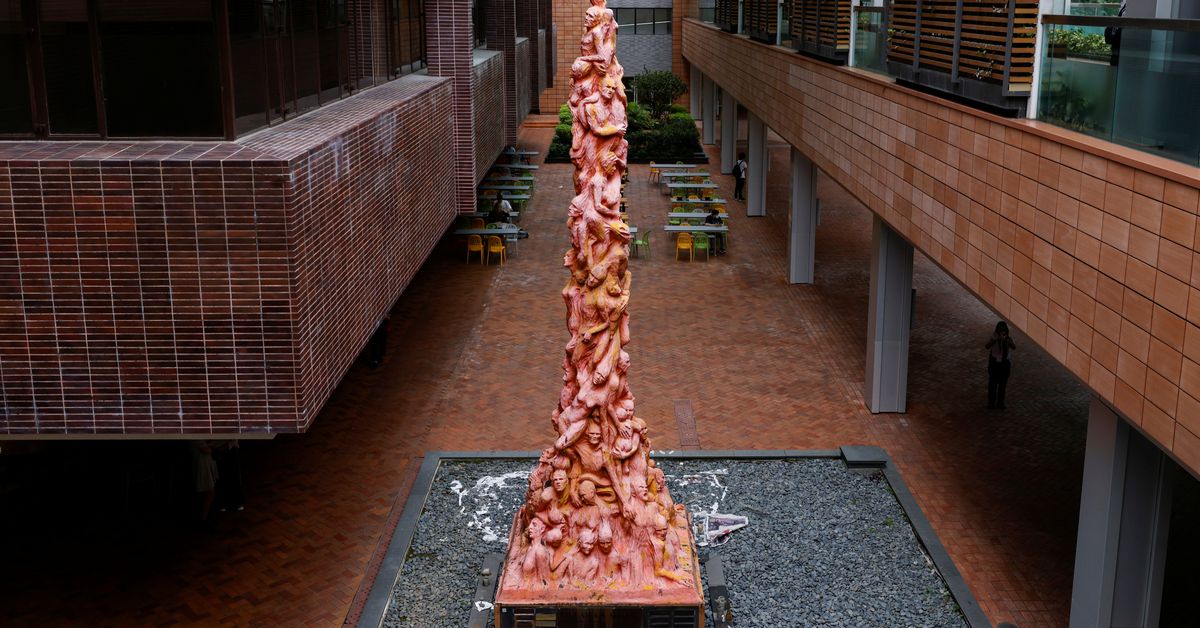 The eight-metre-high “Pillar of Shame” by Danish sculptor Jens Galschiot to pay tribute to the victims of the Tiananmen Square crackdown in Beijing on June 4, 1989 is seen before it is set to be removed at the University of Hong Kong (HKU) in Hong Kong, China October 12, 2021. REUTERS/Tyrone Siu

(Reuters) – Republican senators and human rights activists have taken aim at U.S. law firm Mayer Brown for its work on behalf of the University of Hong Kong, which is seeking to remove from its campus a statue commemorating pro-democracy protesters killed during China’s Tiananmen Square crackdown in 1989.

The statue, a 26-foot tall, two-ton copper sculpture known as the “Pillar of Shame,” is one of the few remaining public symbols in China commemorating the Tiananmen Square crackdown. Beijing resumed control of Hong Kong in 1997. The statue has been installed on the University of Hong Kong campus for more than two decades.

The Danish sculptor who made the statue loaned it to a local civil society group, the Hong Kong Alliance in Support of Patriotic Democratic Movements in China, in perpetuity. In a Thursday letter to the alliance, Mayer Brown demanded its removal by Wednesday on the university’s behalf.

The letter, which did not include any individual Mayer Brown attorneys’ signatures, drew the ire of the statue’s creator, Jens Galschiot, and has attracted criticism from a number of human rights activists and organizations, as well U.S. senators Lindsey Graham and Ted Cruz.

“American firms should be ashamed to be complicit” in the statue’s removal, Cruz told journalist Eli Lake in a Substack column published Wednesday. Graham in the article lamented that “American law firms are doing the bidding of the Communist Party.” A spokesperson for Graham declined to comment further. Cruz’s office did not respond to a request for comment.

Separately, a group of 28 non-governmental organizations called on Mayer Brown to end its relationship with the university in an open letter, saying the firm’s demand “shows that Mayer Brown has violated its stated mission to make a positive difference in the lives of citizens in Hong Kong.”

Mayer Brown in a statement said it was “asked to provide a specific service on a real estate matter for our long-term client, the University of Hong Kong.”

“Our role as outside counsel is to help our clients understand and comply with current law. Our legal advice is not intended as commentary on current or historical events,” the firm said.

Samuel Chu, a founder and former managing director of the Washington, D.C.-based Hong Kong Democracy Council, said in a email that it’s “unacceptable” that Mayer Brown has touted its commitment to human rights in the context of George Floyd’s death “while acting in the exact opposite way in Hong Kong.”

Mayer Brown can trace its presence in Hong Kong back to the 19th century through one of its legacy firms, Johnson Stokes & Master, which was founded in Hong Kong in 1863 and merged with Mayer Brown in 2008.

David Thomas reports on the business of law, including law firm strategy, hiring, mergers and litigation. He is based out of Chicago. He can be reached at d.thomas@thomsonreuters.com and on Twitter @DaveThomas5150.