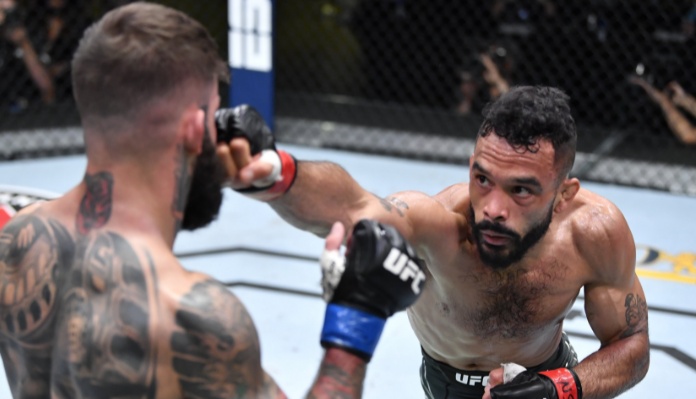 Tyson Chartier was proud of Rob Font as he believes he fought a very good fight against Jose Aldo.

Font had a ton of success but there were a couple of points where he made a mistake and Aldo capitalized and dropped him. According to Chartier, he believes the first knockdown that broke Font’s orbital bone set the tone for the rest of the scrap, as Aldo won a decision. Yet, he is proud of his pupil as he believes they can take a lot of good from it.

“I was super proud of him, I thought he executed really perfectly. At that level, it really is who makes the first mistake that can suffer from that,” Chartier said about Font on Just Scrap Radio on BJPENN.com. “We were looking great at the beginning of the first round, got a takedown, lighting him up a little bit, he was putting it on him and then he got punched with 30 seconds left that broke his orbital and rocked him. That set the tone for the rest of the fight as when you get rocked in that fight, anytime you get hit clear after that, you can’t wear it as well. It was a good litmus test to see where Rob is at.”

The plan for Rob Font is to return in the summer and when he does, Tyson Chartier has a name in mind for his return. That is Cory Sandhagen as they believe it is a fan-friendly fight and one that makes a ton of sense for the bantamweight division.

“I think if you look at that June, July timeframe that would be perfect to allow us to rehab some things and work on stuff we saw in that last fight… I think in a couple of months it will all clear out. But, as it sits right now, him and Sandhagen make sense, we are both coming off losses to tough guys and are both super-talented strikers. I think the fans would like to see it. They fight each other and the winner is right back in the mix. But, who knows.”

Would you like to see Rob Font vs. Cory Sandhagen?