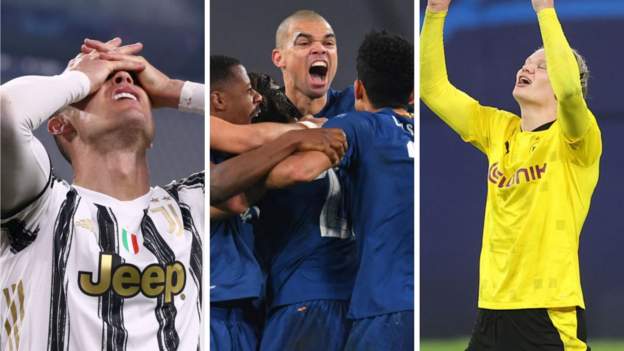 A red card, an extra-time upset, a goal disallowed and a penalty awarded in the same 30 seconds by VAR – Tuesday served up another dramatic night of Champions League football.

In Turin, European heavyweights Juventus crashed out after extra time, despite playing for more than an hour against 10-man Porto – a result that could have huge implications for Cristiano Ronaldo and Andrea Pirlo.

Meanwhile, in Dortmund, Erling Braut Haaland was among the goals again as Dortmund snuck past Sevilla, but only after video technology had its say.

With the dust still settling, BBC Sport looks at the major talking points from a gripping evening in Europe’s premier club competition.

‘One of Porto’s greatest nights’

It was in 2004 that Jose Mourinho famously sprinted down the touchline at Old Trafford to celebrate the injury-time equaliser that saw his side beat Manchester United 3-2 on aggregate in the last 16.

Now, 17 years later, Porto have another last-16 moment to match it after eliminating Italian champions Juve in heroic fashion.

They looked to have blown it when Mehdi Taremi was sent off in the 54th minute with his side 1-0 up, and that feeling got stronger when Federico Chiesa’s second goal of the night brought Juve back level at 3-3 on aggregate.

But a stunning rearguard action and Sergio Oliveira’s 115th-minute goal sent them through, even if Adrien Rabiot’s strike meant it was on away goals.

“What a night for Porto, incredible,” former England midfielder Joe Cole told BT Sport. “Seventeen years ago Mourinho ran down the touchline, this has to be one of their greatest nights since.”

Daniel Woodley: Thankfully it’s bedtime as I need a lie down after that.

Romain B. Fernandes: Sérgio Conceição- the NEW Mourinho for Porto.

Prince Gyimah: Unbelievable! What a goal! Porto have been immense.

Andrew Priestley: What a performance from this has been from Porto.

End of the line for Pirlo?

As good and as decorated a player as Andrea Pirlo was, his appointment as Juventus manager in August last year had an air of experimentation about it.

He is a World Cup winner and owner of multiple major club winner’s medals but came into the role having never previously managed.

Could the experiment now be nearing an end?

After Tuesday’s game, Pirlo had this to say to Sky Italia: “I’ve been called here at Juventus because it’s the beginning of a new project, looking at the future and for several years. I continue calmly with my work.”

Sitting third, 10 points behind the leaders, of a division they have dominated for the past nine seasons now comes clearly into focus following their Champions League exit.

“Juventus have been so dominant in Serie A and that has cost them,” ex-England defender Rio Ferdinand told BT Sport. “They have missed the boat in the last 10 years because they have had the players.

“Was that make or break for Pirlo? They took a gamble on him and you think it could well be. There may be a change of manager in the summer. He has some work to do to stay.”

Aleks Yakubssohn: Least of all do I want to knock Pirlo, Juve’s demise had to happen sometime anyway, no matter under which coach. But I just think they should’ve signed Ronaldo 2-3 years earlier, then maybe they’d have garnered at least one Champions League title.

Seth Gogo Egoeh: If Juventus were interested in winning the Champions League, they wouldn’t have hired a rookie coach in Pirlo in the first place!

End of one era and start of another?

The Portugal forward joined Juve having previously won Europe’s top competition once with Manchester United (2008) and four times with Real Madrid (2014, 2016-18). He is the competition’s all-time leading scorer with 134 goals.

However, despite continuing to score goals at an incredible rate, at the age of 36 his opportunities for further success are dwindling.

Unlike at Real, he has somehow become something of a curse on Juve’s Champions League hopes. Tuesday marked the third time they have failed to progress past the quarter-finals since signing Ronaldo, having reached the final twice in four years before he joined.

With Barcelona trailing 4-1 after the first leg of their last-16 tie with Paris St-Germain, we may also be seeing the further fading of Lionel Messi’s own hopes of another Champions League winner’s medal to add to the four already in his possession.

This season is now likely to be the first season since 2003-04 that the quarter-finals of the competition will feature neither of the world’s established two best players.

To soften the blow, though, we are likely to have their mooted successors in action in the last eight, with Erling Braut Haaland through and Kylian Mbappe not far behind.

A Champions League night doesn’t feel complete without a Haaland goal and, sure enough, the Borussia Dortmund man delivered – again.

His 19th and 20th Champions League goals in just 14 appearances helped Dortmund see off Sevilla and add to his ever-growing reputation.

RTT2021: Does anyone think Haaland is like the original Ronaldo. But has a shelf life of about five years? Haaland has to be a must buy for any Premier League club! Sell your £50m rubbish and buy this guy! He is the only player guaranteed to win your team something.

Paul Leonard: You know what to do @ManCity, go get the name of #ErlingHaaland’s signature on a #City contract