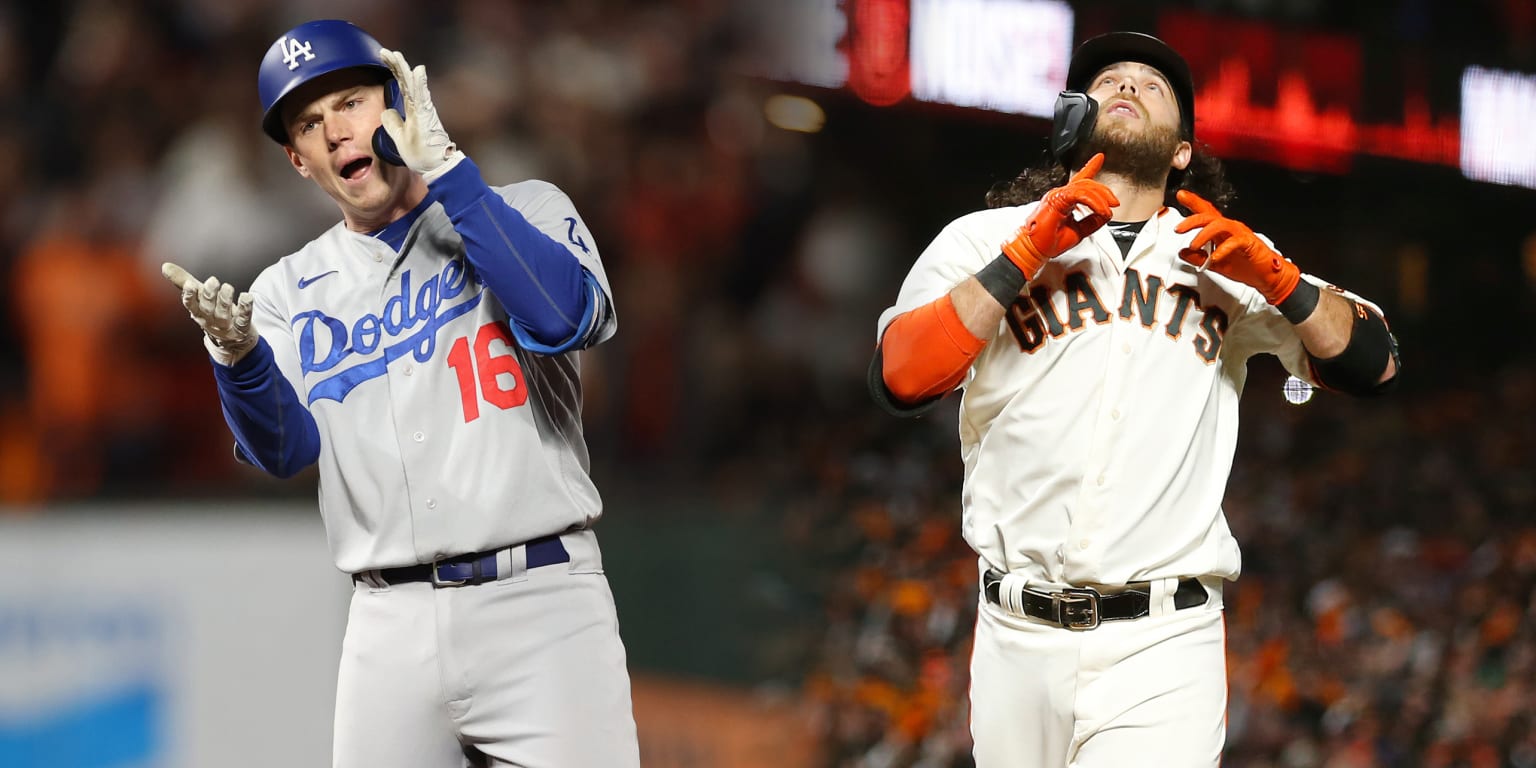 This is all subjective, of course, but it’s fair to ask the question — has there been a more anticipated Game 5 of a Division Series than the pending showdown Thursday between the Dodgers and Giants?

Our unofficial research says no. One team will advance to meet the Braves in the National League Championship Series, and one will go home for the winter, to reflect on a fabulous season that ended too quickly.

Alyson Footer, editor/moderator: Among the baseball-watching public, we’ve heard this a lot in the past 24 hours: “This is what baseball needs and deserves!” This, of course, is referring to a decisive Game 5 between the two best teams, record-wise, in baseball. Within Giants and Dodgers circles, have they embraced the magnitude of all of this?

Maria Guardado, Giants beat reporter: I think so. Dodgers manager Dave Roberts said as much on Tuesday, and Giants players have commented throughout the series that they knew these two teams would have to go through each other to get to the World Series.

Juan Toribio, Dodgers beat reporter: Yeah, I think the Dodgers have, even though most of them won’t say it publicly. But Max Scherzer probably said it best the other night when he said that he can feel just how personal this is to the respective fan bases. He hasn’t been in Los Angeles long, but he understands the rivalry, and I think plenty of generations will be tuned in on Thursday.

Footer: The two teams have identical win totals (109, including the postseason) heading into the decisive game. It is mind-boggling how evenly matched they’ve been since Day 1. We’ve been debating all season who’s better, and after a full regular season and the first four games of the NLDS, I still can’t decide. What stands out to you this series? To me, it’s been defense. Mind blowing on both sides. You have a closer view — what comes to mind first?

Toribio: This might be a lame answer, but honestly, I think what has stood out the most to me is just how good these players are. Both pitching staffs have been incredible. We saw Logan Webb kind of become a star the other night, same thing with Julio Urías in Game 2. Then you throw in what Walker Buehler and Camilo Doval have done, it’s pretty incredible. It’s definitely fitting that this series is going the distance, because I think the fans definitely want to watch this quality at least one more time.

Guardado: I’ve been surprised by the lack of offense we’ve seen from the Giants. They rode three homers and a brilliant start from Webb in a 4-0 victory in Game 1, but they barely eked out a 1-0 win in Game 3 on Evan Longoria’s solo shot off Scherzer. Granted, they’re facing really tough pitching, but this is an offense that led the NL in homers and received huge boosts off the bench throughout the regular season. We haven’t really seen San Francisco’s bench make much of an impact yet, and that’s something that was key to their success all year. The Giants have also struggled to hit lefties recently, so I’m interested to see how they fare in their second matchup with Urías, who pitched well in the Dodgers’ win in Game 2.

Toribio: I do want to add that I think we all knew how good the Giants were defensively, but sometimes it feels like they’re playing with 15 players out there. They’re always in the right spot.

Footer: I love it when a young unknown player has a huge postseason and gets instant fame overnight. That seems to be what’s happening with Webb. I can’t wait for the encore. We know the starting pitching matchup is going to be fabulous, with Urías and Webb back on the hill. But what might happen later? Might we see Scherzer in relief?

Toribio: So Roberts said that it was “highly unlikely” that they were going to use Scherzer in Game 5. Part of that is because they want to try and save him for Game 1 of the NLCS. But we all know that there is no Game 1 without a Game 5 win, so I fully expect Scherzer to be pulling on Roberts’ jersey to let him pitch if it gets to that point in the game.

Guardado: If the Giants have a late-inning lead, we could see another star-making moment from Doval, the 24-year-old rookie who converted a six-out save in Game 3. That guy is nasty, and he very quickly has become a huge piece of the Giants’ back-end mix. I wouldn’t be surprised to see Kevin Gausman, or maybe even Alex Wood, make an appearance out of the bullpen, as well.

Footer: I’m stating the obvious here, but how huge is home-field advantage? I mean, I know the Giants wanted to hang on to the lead in the NL West to avoid the Wild Card Game, but I almost feel like getting to host Game 5 is comparable to winning the division when thinking about what’s at stake.

Toribio: Yeah, the Giants hosting Game 5 is huge. Including the postseason, the Dodgers are 60-24 at Dodger Stadium this season. They also set a franchise record with 16 consecutive wins at home, which, funny enough, was snapped by the Giants in Game 3. The Dodgers were good everywhere this year, but they’re particularly tough at home. Oracle Park is going to be going crazy.

Also worth noting that Urías is 14-2 on the road (including the postseason), so maybe this was all part of their master plan.

Guardado: Thursday is going to be a chilly night in San Francisco, so I think the Giants will be comfortable playing in elements similar to what we saw in a ridiculously windy Game 3 at Dodger Stadium. I also think just having the final at-bat is a huge, huge advantage. Plus, the Giants haven’t lost a home game started by Webb this year.

Guardado: Yep. The Giants are undefeated in Webb’s 13 starts at Oracle Park, where he’s gone 7-0 with a 1.78 ERA over his last 14 appearances this year.

Footer: If there is one worrisome element from your respective teams, what would that be? Maria, you mentioned the offense. Juan, anything from the Dodgers side that you’ve noticed this series that could be an issue tomorrow?

Toribio: Also the offense. Dodgers hitters were really good in Games 2 and 4, but they were also shut out in Games 1 and 3. That’s been the theme for this team all season. They led the NL in runs, but they still never really felt consistently dominant. It’s also kind of worth watching that both of their offensive stinkers have come after an off-day. If they don’t get to Webb early, it might be a long night.

Guardado: I think the Giants should be a little worried about their recent results against left-handed starters. Including the postseason, the Giants are 82-36 against right-handed starters, compared to 27-21 against lefties (11-11 since the All-Star break). The good news for them is Kris Bryant appears to be finally heating up. One of the reasons the Giants traded for him was because they wanted another big right-handed bat to deploy against lefties. He could be key to getting to Urías on Thursday.

Footer: I’m trying to wrap my mind around one of these fabulous teams going home after Game 5. I’m also trying to decide which would be the bigger gut-punch. A loss for the Giants, who led the division all season but couldn’t finish the job vs. their heated rivals? Or the Dodgers, who are trying to repeat after winning the World Series last year in an abbreviated season? I feel like this would be worse for the Giants.

Toribio: I think I agree, but I will say that if the Dodgers don’t win, it’s going to be a huge disappointment. They have a bunch of important decisions to make this offseason and this could very well be the last year this core is together. They spent a lot of money this year so they can try and prove that last year wasn’t a fluke. They have nine innings to keep their season alive.

It also just kind of feels like the Giants are going to be good for a long time, right?

Guardado: I think it would be worse for the Giants. They surprised everyone by stiff-arming the Dodgers throughout the regular season. To see them come up short when it matters most would be a devastating end to an otherwise historically great season.

Toribio: It’s funny how things change throughout a season. I remember Brandon Crawford admitting to me that he didn’t think they would be this good back in March. But now they just expect to win a World Series, and anything less than that is a disappointment.

Footer: Finish this sentence: The team I cover will win Game 5 if …

Toribio: Their stars come to play. The top three in the lineup didn’t have a hit in Game 3, and they had six combined in Game 4. Urías and the pitching hasn’t been an issue, but you can’t win if you don’t score.