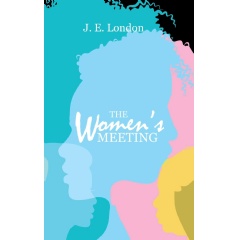 The book illustrates abused women’s journey from hurt to self-discovery and empowerment.

“It batters the body and conquers the mind and soul. The deafening screams echo the sound of fear, silenced only by the sound of defeat. The deep wounds penetrate beyond the skin’s surface, and the overwhelming pain antagonizes one’s spirit for the rest of their lives. It devastates families and communities and weakens the essence of our cultures. We are the only ones who can stop the continuation of this covert operation. Domestic violence is real,” expresses Vaughan.

“The Women’s Meeting” highlights the emotional and psychological effects of domestic abuse that afflict women and children around the world. It is a character-driven story spinning a psychological mystery laden with intrigue and suspense. Its powerful tales surrounding violence and abuse evoke the deepest fears of many women and delivers a message that silence kills.

In this book, Angela Morrison’s perfect world is shattered after she discovers that her hero is the boogeyman, witnessing in silence as her father beat her mother to submission. The contempt in his eyes is like that of an angry beast devouring his prey, and his ferocious behavior traumatizes her.

Angela grows up to be a psychologist specializing in family-marriage therapy. And when offered the opportunity to facilitate the women’s meeting at her church, she eagerly accepts the position. At the women’s meeting, Dr. Morrison meets four women — Anita Harrison, Candace Carter, Ernestine Johnson and Toni Brown. She quickly discovers that each woman possesses similar characteristics of her mother and is hurled back to her own harrowing past. As she guides the women through the pursuit of their truths, she must confront her own demons buried deep in the memories of her alter ego.

According to Kirkus Review, the book is “thoughtful, hard-hitting stuff, and the plot’s gradual climb to personal resolution for even its most wounded characters feels organic and unforced. A harrowing but ultimately uplifting fictional collection of survivors’ stories from the front lines of domestic violence.”

Offered to both male and female readers, author Vaughan shares that she wrote “The Women’s Meeting” because domestic abuse is still one of the best-kept secrets in many homes across America.

About the Author
Jessica Vaughan loves creating unique plots that uplift, inspire, entertain and provide a story that leaves the reader transformed and challenged to improve their own life situations. She holds a bachelor’s degree in psychology and sociology with a minor in English. She also has a master’s degree in education from Old Dominion University in Virginia. She retired from the United States Army after 22 years of service and now resides in Raleigh, North Carolina.