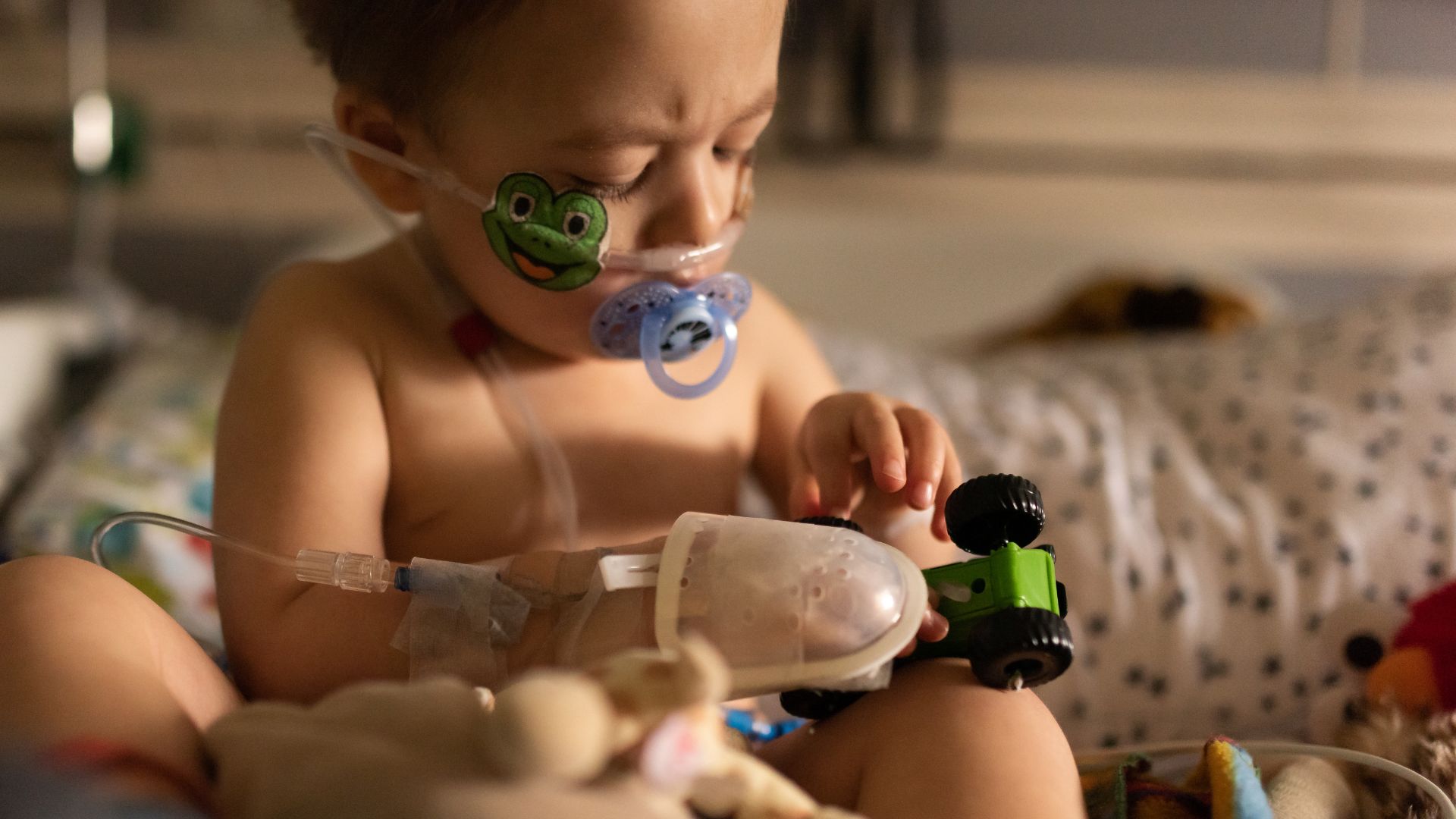 Respiratory syncytial virus, or RSV, is a very common respiratory virus, particularly among children. Indeed, “by age 2, 90% of people have had at least one infection” with RSV, said Dr. Octavio Ramilo (opens in new tab), chief of infectious diseases at Nationwide Children’s Hospital in Columbus, Ohio, who studies RSV. But people can catch the virus at any age, and become infected multiple times.

In healthy children and adults, the virus typically causes mild, cold-like symptoms; but it can cause more serious disease in infants younger than 12 months old, or adults over age 65, according to the Centers for Disease Control and Prevention (opens in new tab)  (CDC). In these more serious cases, the virus spreads from the upper respiratory tract to the lungs, potentially leading to pneumonia, inflammation of the lungs‘ air sacs (alveoli), or bronchiolitis, inflammation of the lungs’ small airway passages.

Infants are particularly at risk for severe disease because of their tiny airways — which, when inflamed, can easily compromise breathing — as well as their immature immune system, Ramilo said. “When you look at the number one cause of hospitalization in the first year of life, the number one is RSV,” Ramilo told Live Science. It’s a “very problematic pathogen,” Ramilo added, and the infection leads to millions of doctor visits and thousands of hospitalizations each year.

Related: The deadliest viruses in history

What are the symptoms of RSV?

Symptoms of RSV often resemble those of the common cold. According to the CDC (opens in new tab), typical symptoms include:

In infants, additional symptoms can include fussiness and poor feeding, according to the American Academy of Pediatrics (opens in new tab) (AAP).

Symptoms typically appear within four to six days of exposure to the virus, according to the Mayo Clinic (opens in new tab). In severe cases, the Mayo Clinic says symptoms can also include:

People should seek immediate medical care if they experience difficulty breathing, a high fever or a blueish color of the skin, according to the Mayo Clinic.

How does RSV spread?

RSV can spread through the air when an infected person coughs or sneezes, or through contact with contaminated surfaces. The virus can survive for up to six hours on hard surfaces, such as toys and doorknobs, and can survive for about 30 minutes on unclean hands, according to AAP.

Children often spread the virus to others at school or in daycare settings, according to the CDC (opens in new tab). Those who are infected with the virus are typically contagious for three to eight days; but people with an immunodeficiency may be contagious for much longer, up to four weeks and even after symptoms clear up.

In the U.S., RSV typically circulates from late fall to early spring, but the timing in a given region can vary from year to year, according to the CDC.

In 2020 and 2021, the U.S. saw an unusual trend in RVS infections. According to a report published in July 2021 in the CDC journal Morbidity and Mortality Weekly Report (opens in new tab), RSV activity in the U.S. dropped to historically low levels from about April 2020 to April 2021. But when COVID-19 restrictions began to lift in the spring of 2021, RSV surged, leading to an unusual summer spike in RSV infections, the report said.

The reason behind these trends still isn’t clear, Ramilo said. Although some experts suspect that measures to reduce the spread of COVID-19 taken in 2020, such as mask-wearing and social distancing, also reduced the spread of RSV, Ramilo said he doesn’t think this is the whole story. “I don’t think we can explain everything from nonpharmaceutical interventions” like masking wearing and social distancing, said Ramilo, who noted that other respiratory viruses, such as rhinovirus and adenovirus, still circulated in 2020, despite restrictions.

What is clear is that the summer of 2021 saw a dramatic increase in RSV hospitalizations. “Here, we saw a big increase in July and August,” at the same level that’s usually seen in December or January, Ramilo said. In 25 years of studying RSV, “this is the first time we’ve seen an outbreak in the middle of July and August,” he said.

Related: 20 of the worst epidemics and pandemics in history

What are the risk factors for RSV?

According to the CDC and AAP, people at risk for severe RSV infections include:

How is RSV treated?

There’s no specific treatment for RSV. Because RSV is caused by a virus, not a bacterium, antibiotics won’t work to treat the infection. Most people who catch RSV get better within a week or two without medical intervention.

Over-the-counter medicines, such as acetaminophen or ibuprofen, can help manage symptoms, such as pain and fever. Children should never take aspirin, according to the CDC. People can also use nasal saline drops and suctioning to help with a stuffy nose, according to the Mayo Clinic. Those with an infection should drink plenty of fluids to stay hydrated.

RSV may also increase the risk of ear infections in children, according to the AAP. If a child develops a bacterial ear infection, their doctor may prescribe antibiotics.

In rare cases, people with RSV are hospitalized, and their treatment in the hospital may include fluids, additional oxygen or use of a mechanical ventilator to help with breathing.

In the U.S., about 3% of infants with RSV infection need to be hospitalized, Ramilo said. But most are able to go home within two to three days, according to the AAP.

How is RSV prevented?

Basic hygiene measures can reduce the risk of RSV infection, according to the Mayo Clinic, including:

People who have cold symptoms should steer clear of those at risk for severe disease from RSV, including premature infants and children with underlying heart or lung conditions.

Infants and children at risk for severe disease from RSV may be candidates for a medicine called palivizumab (Synagis), given to prevent RSV infection. Palivizumab is a monoclonal antibody, a type of human-made antibody designed to fight RSV in a similar way to the antibodies people generate when they have a real infection. The drug is given as a shot each month during RSV season, according to the Mayo Clinic. It doesn’t help treat RSV, it only prevents it. Parents and caregivers can speak with their doctor to determine if their child would benefit from this medication.

There is currently no vaccine to prevent RSV infection, but that could change soon — multiple companies are testing RSV vaccines in clinical trials. For example, in November 2020, GlaxoSmithKline announced (opens in new tab) it had started a phase 3 study testing a candidate RSV vaccine for use in pregnant women. In theory, antibodies generated during pregnancy in response to the vaccine could be passed to their babies before birth.

“We think the situation [with RSV] may change dramatically in the next few years as these tools come into practice,” Ramilo said. “The future looks so much brighter” for preventing RSV.

Is there a vaccine for RSV?

There is not yet an approved vaccine to prevent RSV. However, in early November of 2022, the pharmaceutical company Pfizer announced promising results from a clinical trial of its experimental RSV vaccine.

The one-dose vaccine was given to pregnant people in their second or third trimesters, which triggered production of protective antibodies that then passed through the placenta. Thus, the vaccine granted newborns protection in their first few months of life. It was 81.8% effective at preventing severe cases of RSV in the first three months, and 69.4% effective over the first six months. Pfizer plans to apply for approval from the U.S. Food and Drug Administration by the end of 2022.

In addition to their vaccine for newborns, Pfizer has also developed an RSV vaccine for people ages 60 and older and announced similarly positive results (opens in new tab) from a late-stage trial in August 2022. The company plans to apply for this vaccine’s approval in 2022, as well.

This article is for informational purposes only, and is not meant to offer medical advice.

Rachael is a Live Science contributor, and was a former channel editor and senior writer for Live Science between 2010 and 2022. She has a master’s degree in journalism from New York University’s Science, Health and Environmental Reporting Program. She also holds a B.S. in molecular biology and an M.S. in biology from the University of California, San Diego. Her work has appeared in Scienceline, The Washington Post and Scientific American.