Ruben Gallego Is More Than Just an Alternative to Kyrsten Sinema 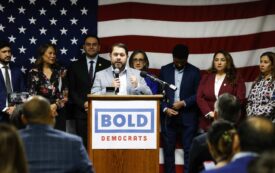 The casual punditry regarding Representative Ruben Gallego’s decision to enter the 2024 race for Arizona’s US Senate seat suggests that the Democratic congressman would simply be a more reliable vote for President Joe Biden’s agenda than incumbent Senator Kyrsten Sinema.

But that’s a bad take. It fails to give Gallego credit for a record that distinguishes him as a tenacious member of Congress with a penchant for speaking truth to power—even when that has involved calling out colleagues, and even when that has required standing up to presidents of both political parties.

There’s no question that on many issues Gallego is closer to mainstream Democrats than is Sinema, who after two years of breaking with her party’s president on critical issues has now switched her registration to independent. And he’s much more in tune with his caucus when it comes to getting things done in Washington. Unlike the incumbent, for instance, Gallegos recognizes that “the filibuster isn’t a tool to encourage sophisticated debate, it’s a tool to kill legislation that the vast majority of Americans support.”

But as a member of the House Medicare for All Caucus and the Congressional Progressive Caucus, Gallego is also a progressive who frequently takes bolder stands than his party’s leadership. He’s outspoken and unapologetic in calling out Republicans when they refuse to act in the public interest. Following last year’s school shooting in Uvalde, Tex., he savaged Texas Senator Ted Cruz for suggesting that calls for gun control represented an attempt to “politicize” the tragedy that left 19 children and two adults dead. “Fuck you @tedcruz you care about a fetus but you will let our children get slaughtered. Just get your ass to Cancun. You are useless,” tweeted Gallego. The Arizonan was equally blunt a few weeks ago, when Republicans were struggling to name a House speaker, tweeting, “House Republicans are incapable of the simplest form of governing. How can we expect them to deliver solutions for Americans?”

Yet Gallego is not merely a partisan politician with a flair for taunting the opposition. He’s proven to be a deeply engaged and thoughtful House member, willing to break with Democratic and Republican presidents when they are wrong, particularly on matters of unauthorized military interventions and escalations.

Gallego, who served as a Marine during some of the most intense fighting of the Iraq War, got into politics as a vet who wanted to help those with whom he had served. One of the first bills he passed as a state legislator was a measure granting in-state tuition status to veterans residing in Arizona. And, like many vets, he’s skeptical about military maneuvers that can lead to forever wars. So it was that, after the Democrat’s election to the US House in 2014, one of his first moves was to stand up to a Democratic president.

President Barack Obama was making moves to increase the US military presence on the ground in Iraq, in response to mounting pressure to take on the Islamic State of Iraq and Syria. But Gallego and Hawaii Democrat Mark Takai, an Army National Guard lieutenant colonel who served with his fellow House freshman on the Armed Services Committee, declared that “the U.S. should not fight the Iraqi military’s battles for them.” That was a brave stance, and they backed it up by asking colleagues to sign a letter urging Obama to resist calls to escalate US military involvement in the region.

“We fought in the Iraq War. We recognize the serious threat that ISIL poses to our allies in the region and support U.S. assistance to Iraq in its struggle against this deadly and determined enemy,” the representatives wrote, using an alternative term for ISIS. “However, we also strongly believe that we cannot fight the Iraqi military’s battles for them. That’s why we strenuously oppose calls to significantly escalate the U.S. ground commitment in this conflict.”

Frustrated with the absence of congressional debate on the issue, amid calls from a number of Republicans and many of their Democratic colleagues for an increased US military presence, the representatives observed, “America’s history has repeatedly shown that though we can give our allies the arms and expertise to fight our common enemies, we cannot impart the determination necessary to prevail on the battlefield.” They also warned, “If we fight in their stead, our success will be temporary and our gains will be fragile.”

Peace Action, which hailed the two young Democrats for their stance, explained,

Gallego and Takai know about Iraq because they fought there themselves. They understand the hard truth that American troops will not bring peace to Iraq nor heal the bitter sectarian divides fueling the conflict. They understand that if the Iraqi military won’t fight—as it has repeatedly failed to do when ISIS has advanced—we cannot fight this war for them.

It is never easy to stand up to a president of your own party, especially as a freshman member of the House. But Gallego did that, with the clarity and nuance that many senior members lacked. Doing so gave Gallego credibility when he stood up to President Donald Trump two years later, after the new commander in chief ordered direct missile strikes on Syria. Only a handful of members of Congress—in either party—raised objections. Gallego was one of them, as was Senator Rand Paul (R-Ky.). “What is the strategy here? What is our end goal? Why did we have to strike today?” asked Gallego. “This is not how you conduct a military strike.”

The combat veteran demanded answers from the Trump administration with regard to the goal of the strikes, and declared, “Congress deserves a debate and a vote on authorizing further military action in Syria.”

That position is a vital one, no matter which party is in control.

Gallego hasn’t been the only progressive member of the House to step up when it comes to intervention questions. He’s worked with others on both sides in Congress to dial back US support for the Saudi assault on Yemen, and he’s joined other progressives in warning against moves that might lead to war with Iran.

The Arizonan is more cautious than representatives such as Barbara Lee (D-Calif.) and Mark Pocan (D-Wis.) when it comes to discussions of how military spending could be reduced. Gallego has voted for too many bloated Pentagon budgets. And since the Russian invasion of Ukraine, he’s been especially ardent in supporting the Biden administration’s requests for new spending. To his credit, however, Gallego recently told Defense News that he could see areas where the Pentagon budget might be reduced. In particular, the Arizonan expressed interest in efforts to get allies to take more responsibility so that the United States does not have to be “all over the world with the expenses and logistics that go with it.”

When it comes to those essential questions about launching unauthorized missile strikes and the casual deployment of troops in distant conflicts that could become forever wars, Ruben Gallego has a proven track record of demanding accountability—which is something we could use a lot more of in the US Senate.