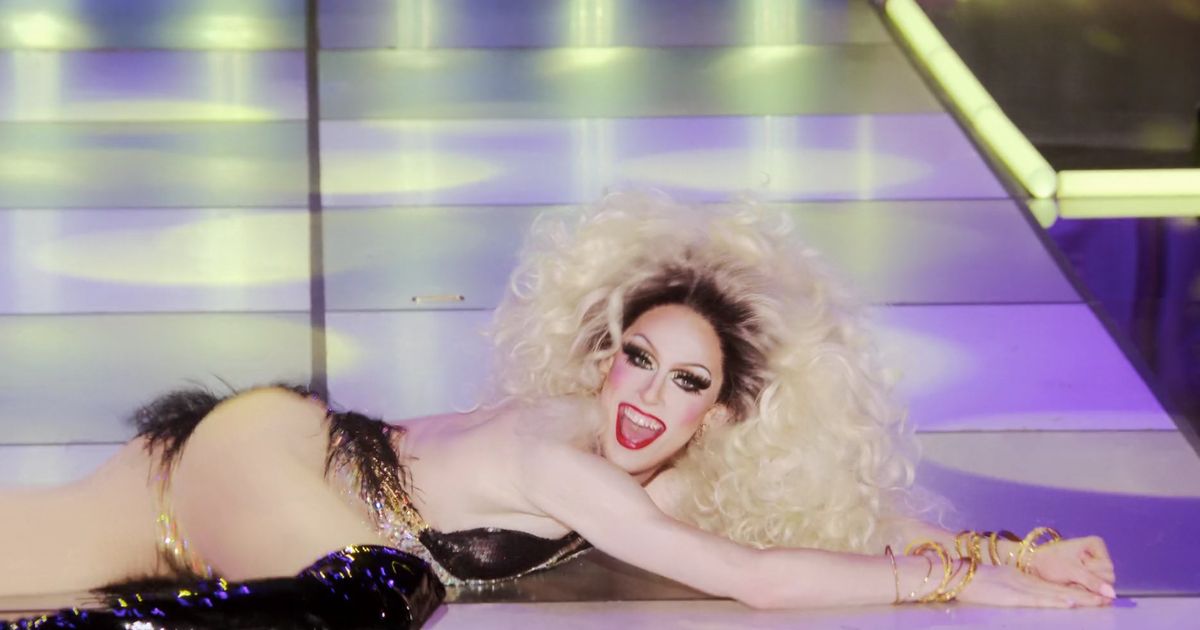 Why have just one big opening when you could have … two? At the top of this episode, we find ourselves in much the same position as last week: meeting a new batch of seven queens who we hope will entertain us with their singing, dancing, and trauma-dumping over the course of this season of Drag Race. But will they be able to stand out from the pack and match the mighty presences of last week’s Kornbread Jeté, Kerri Colby, and Willow Pill? Let’s find out!

Jorgeous
First out the gate is the absolutely gorgeous Jorgeous. Sitting at about five-foot-two, Jorgeous describes her drag as “Tex-Mex Latina showgirl realness.” Instantly sold. No notes. Ordered to series. We also find out she started doing drag at age 16 (!) and is a card-carrying member of Dancing Divas of Texas (I’m assuming they’ve unionized). After this episode, I’m obsessed with Jorgeous, and not just because I can’t stop saying her name like a Cecily Strong “Weekend Update” character. The bitch can perform! I’m captivated by her hip thrusts to the beat of this Dua Lipa B-side and find myself reaching into my wallet for ones as she cartwheels and death drops about the stage. It’s so much fun, and it’s a caliber of show only a true Dancing Diva can deliver. She also stays true to her showgirl roots on the runway, whipping about a purple train and ripping it off to reveal a flawless sequined bodysuit. Toots across the board from me. Brava, Jorgeous!

Jasmine Kennedie
Next out of the gate is my girl, Jasmine Kennedie. Jasmine hails from New York City, where I know her as a stunt queen, lip-sync assassin, and mainstay of the Pieces Industrial Complex. I’m just gonna declare my bias now: I will be stanning Jasmine!! If you want an unbiased review of the NYC queens, go read Encyclopedia Britannica’s Drag Race recaps or something. You’ll be given no quarter here! Moving on. It’s also lovely seeing the instant camaraderie and mutual respect Jasmine and Jorgeous develop for each other. I ship these two dancing divas! As I expected (and hoped), Jasmine blesses us with a perfectly paced, stunt-filled dance routine for her portion of the talent show. One backflip and several spinning jump splits later, she has the judges and her fellow queens right under her thumb. She tops it all off with a beautiful homage to ’60s drag that Ru and Michelle eat right up. A great first ep for Jasmine in my very objective and extremely correct opinion!

Daya Betty
Daya Betty makes no secret of the fact that she’s house of Methyd: It’s quite literally written all over her face (in eye shadow and lipstick, of course). It’s almost uncanny how much her voice sounds like Crystal’s. Close your eyes and it’s like we’re back on season 12. The kooky queen’s challenge throughout this ep is to distinguish herself from her widely beloved drag mother. Daya says she’s inspired by the grunge movement: “She’s the rock star and the rock star’s girlfriend shoved together with a safety pin shoved through it.” Sure! I like that. But you’d never guess any of those references based on her talent-show performance, and therein lies the problem. It’s funny but not quite funny enough to be a comedy routine. She has tricks but not quite enough tricks to make it a compelling lip sync. The result is a performance that feels unfinished and a little unsure. In a wider set of queens or a less competitive field, Daya might have skated through this episode, but the split premiere places her under a microscope, and her shortcomings are plainly visible under Ru’s lens. Her runway feels much more on brand to Daya’s punk roots, but as Carson points out, the details aren’t there, and Daya Betty finds herself in the bottom two.

Lady Camden
Next up is Lady Camden. In drag, it’s giving Madonna dressed as Baby Spice; out of drag, it’s giving Little Orphan Annie (I’m allowed to say that as someone of red-haired, British-orphan-lookalike experience). Lady Camden hopped across the pond and now lives in Sacramento. The self-described “tacky queen” is joyful, colorful, and obsessed with girl groups. For her talent, she wants to show off her classical ballet training. RuPaul is wholly unexcited, but Lady Camden persists, deciding to continue with the ballet while updating it with a more modern score and layering in a few contemporary dance styles. The result is something that one might describe as the yassified version of Julia Stiles’s Juilliard audition at the end of Save the Last Dance. Lady Camden sells it with comedy and her obviously well-honed stage presence, and the judges seem quite entertained.

DeJa Skye
DeJa Skye: yet another instance of the elusive NorCal queen! DeJa is a campy comedy queen who’s also known as “the pastel princess.” DeJa tells us she choreographs cheer and dance for a living, but as we find out later in the episode, she’s not too good at executing said choreo herself. (The Abby Lee Miller of drag.) DeJa’s entrance look is … a visual buffet. By that I mean there’s so much to choose from (the neon wig! The polka dots! The black lip! The cutouts!) that I don’t know where to start, get overwhelmed, and just return to my table with scrambled eggs and a little fruit salad. As I alluded to, the talent show doesn’t go too much better for DeJa. Her cheer-coach character is ultimately a sketch without a punch line — not to mention the fact that demonstrating how bad you are at something (even comedically) seems like a poor choice for a first impression talent-show challenge. Her runway, while markedly more successful, is not enough to keep DeJa out of the bottom.

Maddy Morphosis
Finally, in comes the much anticipated cishet icon Maddy Morphosis. We’re only meeting Maddy now, but her sexuality and gender identity have already been the subject of several weeks worth of online discourse. (To which I say: Go touch grass!) Maddy enters in a drag homage to Guy Fieri. Maddy’s talent? How do I put this? The vibe is like you’re visiting a friend at Middlebury College in 2016 and some random guy brings you back to his dorm room, and you think he wants to bang, but then he just asks if you’ve ever heard of Tame Impala and plays guitar for you. He finishes his song, and you think, Okay, now we’re gonna smash, but then he tells you he has a 9 a.m. lecture in the morning and kicks you out. B-minus. A fun, campy, beheading-themed runway saves Maddy from a bottom-two placement and earns her some praise from the judges. Maddy survives another week but just barely. Hopefully, she has some tricks up those heterosexual sleeves. Or at least some Slim Jims.

Angeria Paris VanMicheals
Last into the werkroom, Angeria Paris VanMicheals, “the southern belle from ATL.” If you’ve been with me for a while, it will come as no shock to you that I love Miss VanMicheals. There’s nothing I love more in this world than an old-school southern pageant queen, and this “glamorous country bumpkin” has classic drag in spades. She’s effortlessly funny (which causes poor Daya Betty to spiral in the corner while Ru does her walk-through) and has plenty of charisma and talent to back it up on stage. Like Kornbread, Angeria came prepared with an original track with which to wow the judges for the talent show. Angeria’s success here reveals an interesting split: On All Stars, these preprepared tracks have begun to feel a little stale. Yet somehow on a classic Drag Race season, they feel fun and fresh as ever. Perhaps because we genuinely don’t have context for these new queens, their lyrics and performance choices feel more surprising and interesting. But I digress. Just as Kornbread did last week, Angeria takes the top prize with her talent, establishing herself as the standout of the week. She has the judges and the queens singing along with her, smoke effects, costume changes — it’s a damn Broadway show! Budget? Check! Angeria’s runway gown lives up to the pageant-girl hype, completely sealing the deal and earning her the first win of the season.

Finally, it comes time for Daya Betty and DeJa Skye to duke it out to “Fallin’” by Alicia Keys, but honestly, it’s no contest. Daya is a performer, and she’s fun to watch (or at least I think she would be), but it’s impossible to take your eyes off of DeJa, especially in the latter half of the lip sync. DeJa must have had this song on repeat before this because the practiced, on-beat hip isolations and the perfectly timed lip-syncing to Keys’s riffs put her head and shoulders above Daya. And so, in what feels like record elimination speed for modern Drag Race, we send home our second queen in as many weeks. At this rate, the season will be wrapped up before March! My Spidey-senses are tingling, though, and something tells me there are plenty of shenanigans in store as we enter the meat of the season. Only time will tell.

A weekly segment in which I briefly discuss stray thoughts that won’t leave my head.

The name Angeria Paris VanMicheals.
I love old-school, three-named drag queens so much. These new girls should learn a thing or two from the greatest titans and heroes of queer history (Nicole Paige Brooks).

Lady Camden: “I’m sort of like the sixth member of the Spice Girls.”
Maddy: “Old Spice.”
Old Spice? Maddy strikes me as more of an Axe Body Spray girl.

RuPaul throwing a faux fit over the Tic Tac bowl.
RuPaul is entering her “Tyra Banks pretending to have rabies” era, and we should all be very afraid.

Alicia Keys meeting the queens from behind the mirror.
Alicia said, I will not be catching Omicron today!!!