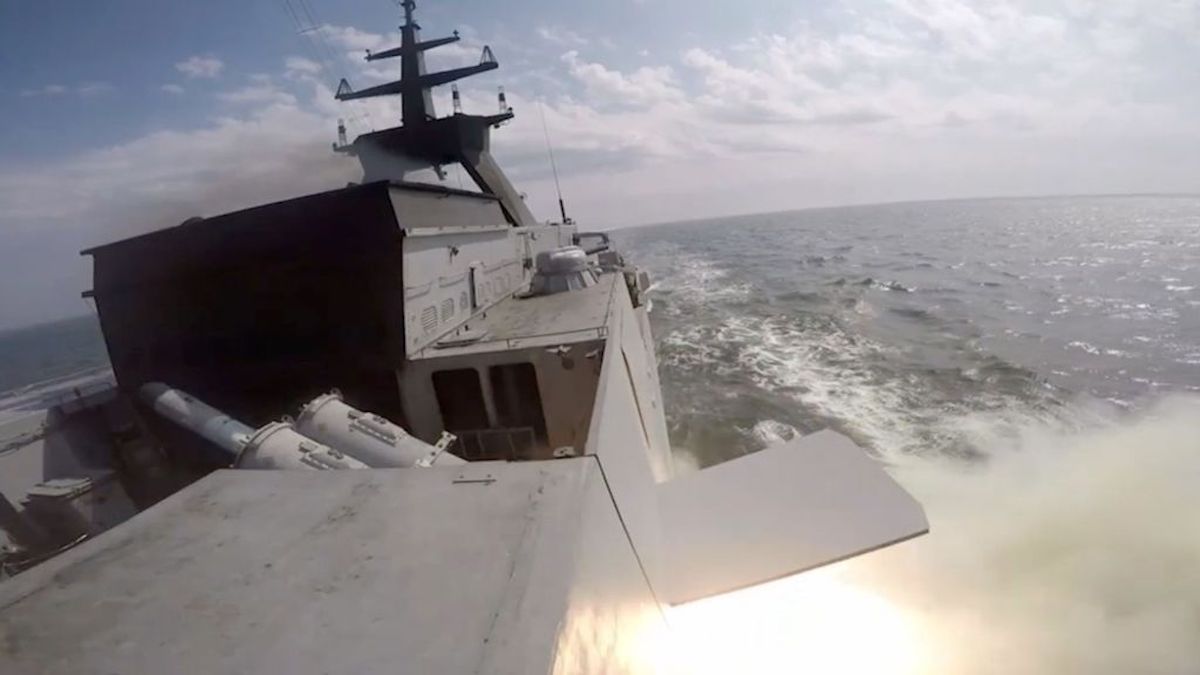 Russia has conducted an anti-ship missile exercise in the Baltic Sea amid escalating tensions with NATO member Lithuania after the latter country blocked the transit of goods to the Russian exclave of Kaliningrad.

The footage reportedly shows a Russian warship in the Baltic Sea performing a military exercise. The vessel can be seen launching an anti-ship missile at what appears to be a mock target with a camera mounted on board. The footage showed the missile hitting the target with pinpoint accuracy.

The Russian Ministry of Defense (MoD) said in a statement on Monday: “The crew of the Soobrazitelny corvette, as part of an exercise of the Baltic Fleet, launched a missile attack on a sea target imitating a warship of a mock enemy.”

“Rocket firing was carried out using the main strike weapon of the corvette – the Uran anti-ship missile system. In addition, the crew of the corvette worked out an air defense exercise at sea using the A-190 artillery system.

“After completing the fire mission, the crew of the ship conducted a series of shipboard exercises – on electronic warfare, damage control, anti-sabotage defense, organizing interaction and communications between ships providing missile firing.”

Lithuania announced Friday the suspension of the transit of goods that have fallen under EU sanctions through its territory to the Russian exclave of Kaliningrad, which borders Poland and Lithuania and was captured from Nazi Germany in 1945, toward the end of World War II. Goods had until now primarily arrived there from Russia via rail, transiting through Lithuania.

The Russian foreign ministry reacted to the announcement of the suspension of the transit of goods by summoning the Lithuanian Chargé d’Affaires, Virginia Umbrasene, demanding that the restrictions be lifted.

Russia has said that it “reserves the right to act to protect its national interests,” while the governor of the Kaliningrad Oblast region, Anton Alikhanov, has announced plans for cargo vessels to begin ferrying goods between St. Petersburg and the exclave.

Andriy Yermak, head of the Ukrainian president’s Office, said Monday evening that “the Kremlin’s attempts to threaten Lithuania are a challenge for the EU and NATO.

“Now it is important to maintain a stable position and make no concessions to Russia on sanctions and restrictions on transit of goods from Russia to Kaliningrad. Any concession will be perceived by Russia as a weakness.”

EU Foreign Policy Chief Josep Borrell said at a press conference in Brussels that Lithuania is merely applying the EU’s sanctions and is not taking any unilateral measures.

Zenger News contacted Russian and Ukrainian officials for comment but had not received a reply at the time of writing.

Russia invaded Ukraine on February 24 in what the Kremlin is calling a “special military operation” to “liberate the Donbas.” Tuesday marks the 118th day of the invasion.

The new head of the British Army, General Sir Patrick Sanders, has told British forces that they need to be ready to face Russia on the battlefield and said the British Army now needs to be capable of defeating Russia.

NATO Secretary-General Jens Stoltenberg said that the war in Ukraine could last years, adding that while the costs were high, the cost of allowing Russia to achieve its military goals would be even greater.

President Joe Biden has promised Kyiv another billion dollars in security assistance and weapons, and General Mark Milley says Russia has lost around 20 to 30 percent of its armored force during the ongoing invasion.

Independent Russian journalist Dmitry Muratov has auctioned off his Nobel Peace Prize medal for $103.5 million, with all the proceeds going to help Ukrainian refugees.

Muratov, 60, is the editor-in-chief of Russian independent newspaper Novaya Gazeta, which he co-founded in 1993. The paper has regularly defied numerous threats and covered themes that make the Kremlin uneasy.

Novaya Gazeta has reported on Russian government corruption, human rights violations, and police violence as well as publishing articles that are critical of Putin.

Muratov has been a vocal advocate for the freedom of the press and argued that it needs to remain independent from government influence.