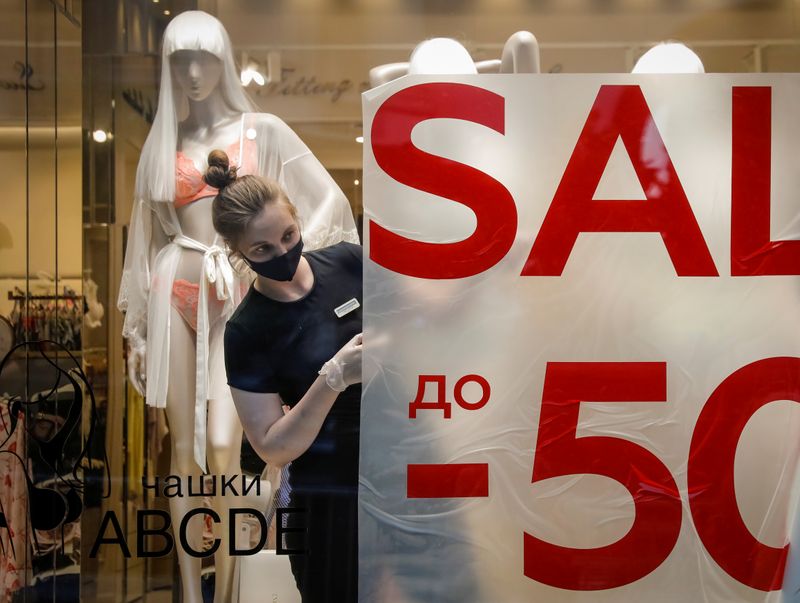 MOSCOW (Reuters) -Russia’s economy avoided catastrophe during the height of the COVID-19 pandemic and is now approaching pre-crisis levels, President Vladimir Putin said on Friday, an assertion backed up by data showing a 34.7% jump in retail sales in April.

Russia’s commodity-dependent economy is on the mend after a 3% contraction in 2020, its sharpest in 11 years, when lockdown restrictions stifled economic activity, but officials say a recovery to levels of late 2019 is imminent.

Rosstat also said Russia’s real wages, adjusted for inflation and reported one month later than other indicators, rose 1.8% in March, below a Reuters poll foreseeing 2.1%.

The unemployment rate peaked at 6.4% last year, but fell to a year low of 5.2% in April, data showed last month.

Economic growth and a recovery in living standards in Russia are a crucial issue for Putin and the United Russia ruling party. The latter is bracing for parliamentary elections in September after protests rocked the streets earlier this year.

Putin ordered that Russia’s anti-crisis mortgage programme be extended by one year to July 2022, saying state-sponsored aid to support the construction sector and households could not be stopped abruptly.

He also proposed a new support mechanism for small- and medium-sized enterprises — a loan guarantee with partner banks that could attract at least 600 billion roubles ($8.22 billion) in extra funds for smaller businesses by 2024 by giving them better access to credit.

Lending in Russia is on track to become more expensive as the central bank is expected to further raise rates amid high inflation, with the next hike possible later in June.