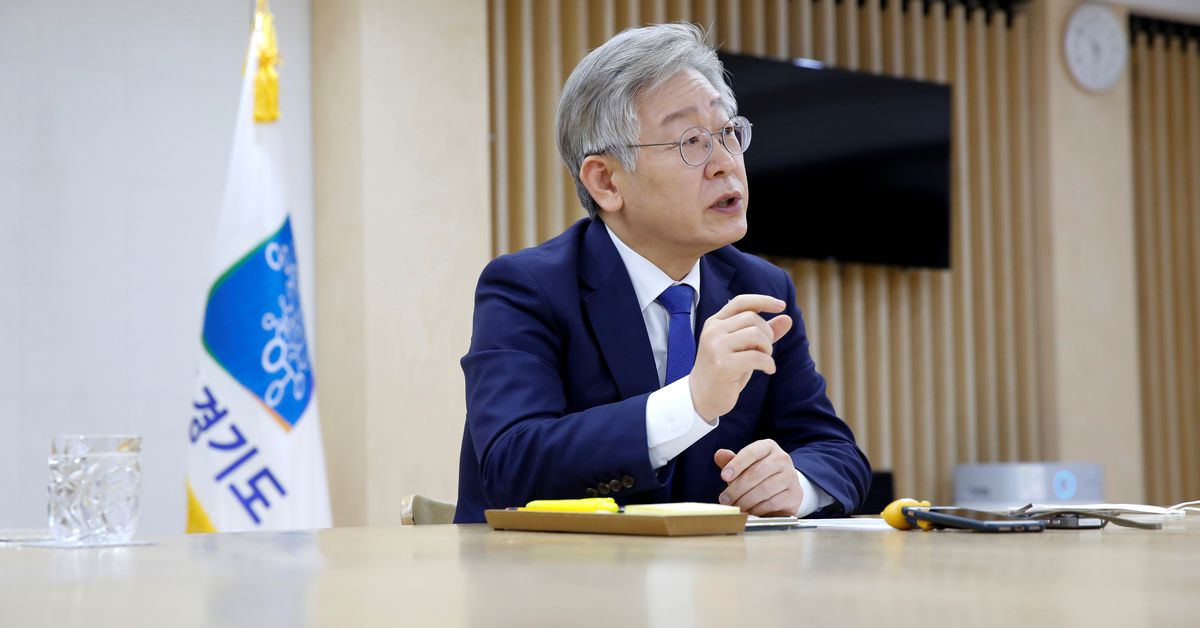 SEOUL, Sept 14 (Reuters) – A South Korean politician who once said he aspired to be a “successful Bernie Sanders” is leading the field to replace Moon Jae-in as president after rising to prominence with an aggressive pandemic response and a populist economic agenda.

Lee Jae-myung, the governor of Gyeonggi province, has led in many recent national polls and dominated the early rounds of the ruling liberal Democratic Party primary, including the latest voting over the weekend.

As governor, Lee advocated for universal basic income and instituted cash payments to all 24-year-old people for a year. When the COVID-19 pandemic hit, all province residents also received regular payments.

Under Lee, Gyeonggi also took aggressive steps to combat the pandemic, introducing restrictions on gatherings that were later adopted by the national government, raiding a church at the centre of a large outbreak, and imposing a controversial requirement that all foreign residents be tested.

His outsider image was once seen as a liability in the face of establishment competitors with closer ties to the outgoing Moon.

But with many South Koreans disillusioned by runaway housing prices, a poor employment outlook for young people and a string of corruption scandals, that populist message has driven him to the head of the pack as he looks to blunt conservatives’ efforts to capitalise on voter discontent.

Lee no longer compares himself to Sanders, the progressive senator who unsuccessfully sought the Democratic Party nomination for U.S. president, and has expressed willingness to adjust his policies to avoid strife while embracing “compromise and consensus”.

But he still casts himself as someone who will take on the establishment – which at the moment is largely his own party.

“Only politicians who have the courage and driving force to put up with the resistance and backlash from the establishment can keep and fulfil promises and achieve results,” Lee said during a primary in the eastern province of Gangwon on Sunday. “And I have never made a promise that I could not keep.”

Born to an impoverished farming family in a remote mountain village in the country’s southeast, Lee, 56, attributes his focus on economic equality to an early life as a child labourer in chemical factories that left him with impaired hearing and a wrist deformity.

When elected mayor of Seongnam, one of the largest cities in Gyeonggi, in 2010, he initiated a plan to establish a new, larger public hospital with unprecedented numbers of negative pressure rooms and intensive care beds. The facility now serves as a national COVID-19 centre and has treated more than 3,000 patients.

“Keeping people from disasters and infectious diseases by providing public medical service is one of the government’s most fundamental duties, and my political career began from there,” Lee told Reuters in December.

A longtime advocate of universal basic income, Lee vowed to provide 1 million won ($850) to all citizens and another 1 million to people aged 19-29 every year if he takes office.

He also pledged to boost housing supply by building more than 2.5 million homes, including 1 million to be distributed under a “basic home” scheme, aimed at allowing non-homeowners to live in high-quality public housing at low prices for up to 30 years.

To bankroll the programmes, Lee proposed a carbon tax and a national land tax scheme to increase taxes for all property holders and cut transaction costs.

“I will adopt universal basic income as a national policy to pave the way for a grand transition from a low burden, low welfare state to a medium burden, medium welfare state, while minimising tax resistance,” he told a news conference in late July.

FROM OUTSIDER TO FRONTRUNNER

Lee, who came in third during the Democratic Party’s last presidential primary in 2017, has been dogged by personal controversy while in office, including allegations of an affair with an actress, which he has denied.

As proof of their alleged relationship, the actress said the governor had a large mole on his body. In 2018, Lee publicly undertook an examination to refute that claim, with doctors concluding he had no such mark.

A lawsuit by the actress demanding 300 million won ($255,000) in compensation from Lee is pending in court.

Lee’s rise has been driven chiefly by young and politically independent South Koreans who propelled Moon to victory in 2017 but have since grown disillusioned.

This year Lee has pulled past party bigwigs such as former prime minister Lee Nak-yon, who were seen as favourites of insiders seeking a trusted nominee who can protect Moon’s political legacy.

The conservative opposition, meanwhile, remains in disarray with no one emerging as a potent contender yet.

“Despite mainstream Democrats’ efforts to keep him at bay, Lee’s experience and outsider image cater to many voters’ craving for a candidate who can get the job done,” said Kim Hyung-joon, a political science professor at Myongji University in Seoul.