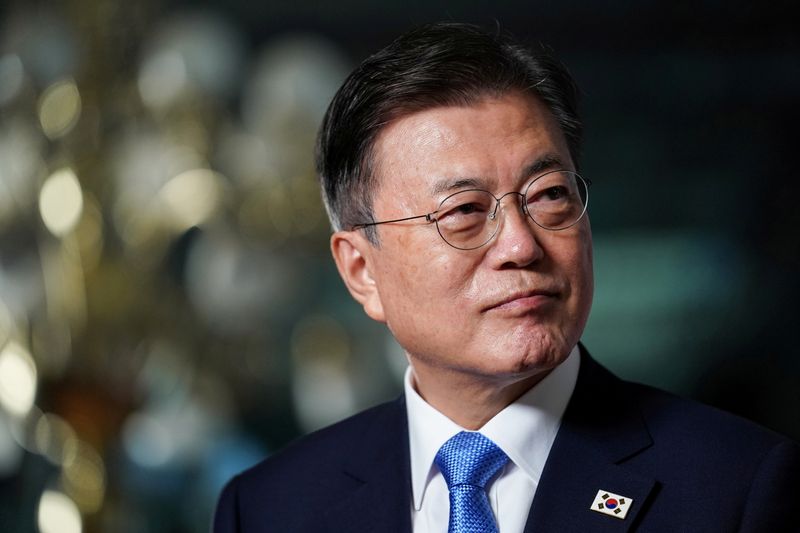 SEOUL (Reuters) – South Korean President Moon Jae-in was set to depart Friday for the Group of Seven summit in Britain where talk of countering China could overshadow Seoul’s efforts to be seen as a bigger player on issues such as climate change and the COVID-19 pandemic.

South Korea is one of several guest nations invited to the G7 meeting as the rich democracies try to show the world they can still act in concert to tackle major crises by donating hundreds of millions of COVID-19 vaccines to poor countries and pledging to slow climate change.

“We will show our leadership at the G7 in formulating joint responses to pressing global challenges including health issues and climate change,” a senior presidential official told reporters.

Moon has touted some of South Korea’s pandemic responses such as aggressive tracking and tracing, avoiding widespread lockdowns while keeping cases relatively low, as a global model.

Under Moon, South Korea has committed to zero emissions by 2050 and unveiled a “Green New Deal” to harness investment in green technology as a way to recover from the pandemic and vowed to end funding coal plants around the region.

However, the summit is also expected to include discussions on free trade and countering Beijing’s growing influence. Another guest nation at the summit, Australia, has called on the G7 to back reform of the World Trade Organization to address the growing use of “economic coercion” amid a dispute with China.

Seoul has walked a fine line in its approach to Beijing, which is South Korea’s largest trading partner and which has shown a willingness to retaliate economically, as during a 2017 dispute over U.S. anti-missile systems based in South Korea.

The presidential official did not mention China, but said that Moon would take part in discussions on “the need to reinforce the global supply chain and free trade.”

Anti-China sentiment has reached historic highs in South Korea and Moon’s ruling party is facing domestic pressure on the issue.

In his first summit with U.S. President Joe Biden last month, Moon surprised some observers by issuing a statement saying South Korea would work with the United States on “peace and stability in the Taiwan Strait,” a remark that drew a warning from China not to interfere in the matter.

The subtle shift to stronger public statements from Seoul appears due to several factors, including an increasing wariness of Beijing among South Koreans, and Biden’s less bombastic approach than his predecessor Donald Trump, said Ramon Pacheco Pardo, a Korea expert at King’s College London.

“Biden is cleverer in his approach to China, focusing on cooperation with like-minded countries and allies,” he said. “This gives the Moon government sufficient diplomatic cover to cooperate with Biden’s China policy.”

The economic beating South Korea took during Moon’s first year in office ended up hardening his party’s views on China to a certain extent, and broader anti-China sentiment in South Korea has since soared, said Anthony Rinna, a senior editor with Sino-NK, a group that researches the Korean peninsula and its relations with neighbours such as China.

“With an election less than a year away, the onus is on the ruling party to demonstrate to voters that it can take a sufficiently tough stance against China,” he said.