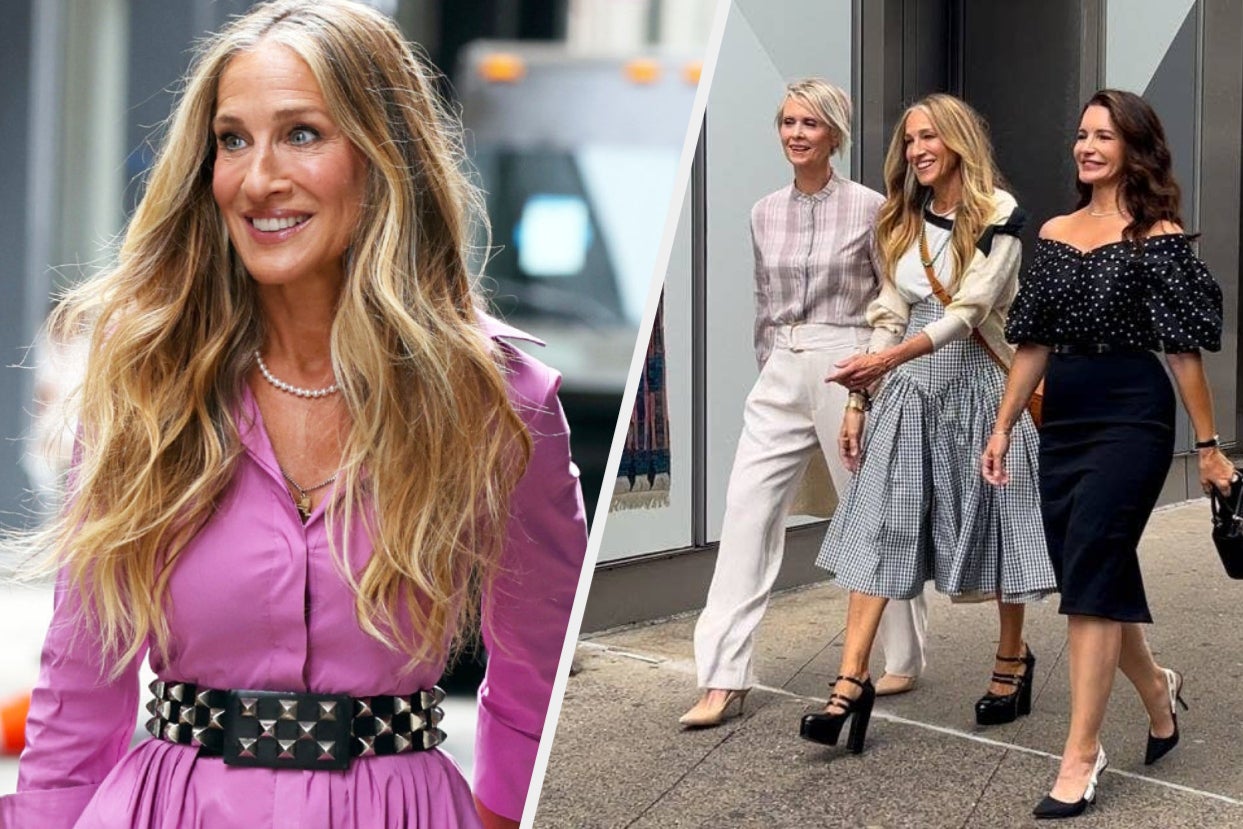 SPOILER ALERT! The leaked script hinted at a very unexpected plotline in the upcoming reboot.

Sex And The City fans have been given a glimpse into the plotline from the upcoming reboot of the iconic show after a script was leaked to Page Six last week.

The leaked script from the reboot, entitled “…And Just Like That,” includes a conversation between several central characters and hints at some juicy drama between Carrie and Mr. Big.

In the new scene, Carrie Bradshaw is dining out with Charlotte York Goldenblatt and Miranda Hobbes, with Samantha Jones’ empty seat seemingly filled by Stanford Blatch.

And a single line of Carrie’s dialogue appears to hint at a number of changes in her life.

“I was taping the podcast, I was washing my hair. Yes, I wasn’t eating or sleeping, but at least I felt good about my marriage. Now I’m just one of the wives he was taking care of?” the script reads.

Not only have we just discovered that she’s turned to podcasting, it also appears that Carrie and Mr. Big are experiencing some trouble in their marriage.

In fact, it’s now being speculated that this line of dialogue could mean that Carrie and Big have ended their marriage entirely and are now fighting over finances — not least because Carrie appears to be comparing herself with Big’s previous wives to whom he pays spousal support.

And despite the pair’s historically turbulent relationship, this new twist has come as a surprise to many fans given that the couple tied the knot at the end of the first SATC movie and seemed set to live happily ever after.

Shortly after the script leaked, entertainment website The Cut launched into a line-by-line analysis of the dialogue, which prompted the show’s main star to speak out.

The publication teased the article in a post to their Instagram with the headline, “What Can We Learn From the Leaked Sex and the City Script?,” to which Sarah Jessica Parker responded, “I’m eager to read analysis.”

And the comment from SJP has many dying to find out exactly what she thinks of the speculation.

While the script gave fans plenty to ponder over, it didn’t offer any further details on the whereabouts of the fourth member of the iconic girl gang, Samantha Jones, played by Kim Cattrall.

Cattrall has publicly distanced herself from the show in recent years and decided against participating in the reboot as the much-loved Samantha.

The original show has long been accompanied by murmurs of the cast not getting along. However, the rift between Kim Cattrall and Sarah Jessica Parker became evident in 2017 when SJP confirmed that a third SATC movie had been scrapped at the last minute despite there being a script and production at the ready.

It was rumored that Kim had held up production on the sequel; however, the actor quickly took to Twitter to deny she’d been the reason for production being halted and confirmed that she’d never had any desire to participate in a third movie.

Soon after this, Kim confirmed during an interview with Piers Morgan that she and her fellow SATC castmates were “never friends” throughout the filming of the show, and described the relationships on set as “toxic.”

And, following the release of the teaser clip for the reboot in January this year, SJP confirmed that Kim wouldn’t be returning to the show in response to a comment from a fan on Instagram.

When asked if Kim would be returning for the next chapter of the show and whether rumors of a feud were true, she responded, “No. I don’t dislike her. I’ve never said that. Never would. Samantha isn’t a part of this story. But she will always be a part of us. No matter where we are or what we do.”

With all this in mind, fans of the show are keen to find out how the producers intend to address Samantha’s absence in the upcoming reboot.

In an interview with TVLine earlier this year, HBO Max chief content officer Casey Bloys revealed that Samantha’s departure will be explained as her having simply grown apart from the rest of the group.

“Just as in real life, people come into your life, people leave,” he explained. “Friendships fade, and new friendships start. So I think it is all very indicative of the real stages, the actual stages of life.”

But while the leaked script appears to confirm there will indeed be no sign of Samantha in the reboot, HBO has revealed that some new faces are set to appear.

The all-white friendship group at the center of the original show is set to be updated, with three non-white actors joining the central cast in an attempt to make the series more inclusive.

TVLine reported earlier this year that the show’s original writers will be working alongside three non-white writers to craft the scripts for the updated series.

“They are being very, very conscious about understanding that New York has to reflect the way New York looks today,” Casey Bloys told TVLine.

And in a post on her Instagram earlier this month, SJP confirmed that filming for the reboot is well underway in New York City.

Along with the start of filming has come an influx of snaps from the set, leaving fans thrilled to see Carrie and the gang (minus Samantha) back together serving some serious looks on the streets of NYC.

However, as anticipation for the reboot builds, it is worth wondering if the newly leaked script might be a sneaky tactic from the producers to throw fans off the scent of any major secrets from the series.

And this wouldn’t be the first time the SATC producers have thrown fans a red herring.

During the filming of Sex and the City 2, Kim Cattrall had the idea to put on a wedding dress and run across the street in New York to trick fans into thinking that her character might be set to tie the knot in the new movie.

The director of the movie, Matthew Patrick King, told MTV News that Kim had come up with the idea herself.

“[She] came to me and said, ‘I want to come to the set someday in a wedding gown and make everybody think Samantha’s getting married,’” he said. “Forty-five minutes later, I turned around; she was crossing the street in a wedding gown.”

BuzzFeed News has contacted a spokesperson for HBO Max for comment.