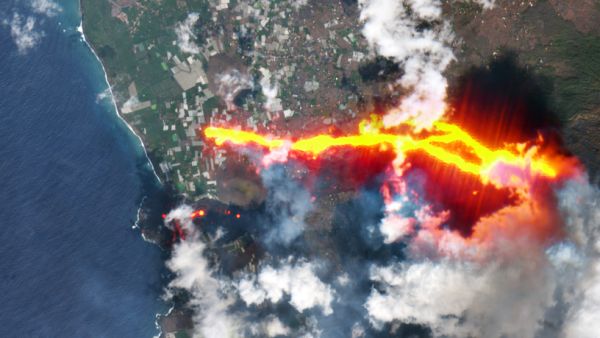 This Sentinel-2 image of the La Palma volcanic eruption have been processed in true color, using the shortwave infrared channel to highlight the new flow of lava.
(Image credit: Copernicus)

Satellites have captured stunning new images of the intensifying volcanic eruption on the Spain-owned island of La Palma as new streams of lava spilled out over the weekend.

The revitalized volcanic eruption was accompanied by boulders the size of a house rolling out of the Cumbre Vieja volcano’s crater, where part its cone collapsed on Saturday (Oct. 9), as locals reported dozens of Earth tremors up to 3.8 magnitude since Sunday. The reports signal Cumbre Vieja was still far from going to sleep.

The European Earth-observing satellite Sentinel-2 caught a glimpse on Sunday of the new lava streams that squirted out of the fiery volcano after the partial collapse of its conical crater that had formed since the beginning of the eruption on Sept. 19. The collapse freed the way for the up to 2,264 degrees Fahrenheit (1,240 degrees Celsius) hot lava to spill in new directions. A powerful sizzling stream quickly formed north of the original lava river and found a path downhill toward the coast, threatening settlements that have so far escaped the infernal demise.

And according to data released by the European Union’s Copernicus Emergency Monitoring Service on Saturday (Oct. 9), at least 1,186 buildings have so far been bulldozed by the scorching lava, which now covers nearly 2 square miles (5 square kilometers) of land. The team said on Twitter they couldn’t refresh their estimates on Sunday (Oct. 10) due to clouds obstructing the view of the satellites. The neighborhood of Todoque, part of the Los Llanos de Aridane municipality in the southwest of the island, is now in imminent danger, the European Space Agency (ESA), which operates the Sentinel satellites on behalf of the E.U. said in a statement.

The environment-monitoring service Adam Platform, which processes Copernicus data, tweeted on Monday that the sulfur dioxide plumes from the volcano, which had managed to cross the Atlantic Ocean and reached the Caribbean at the end of last week, have now mostly dissipated. Most of the volcanic emissions are now moving eastward over Northern Africa.

The U.S. weather forecasting satellite GOES East captured the thermal signature of the intensifying eruption from its orbit at 22,000 miles (36,000 kilometers) above Earth, using its infrared imaging instrument.

Last week, astronauts aboard the International Space Station captured impressive images of the plumes of smoke and ash emitted from the volcano from an oblique angle, providing a three-dimensional view. The image reveals the gray plume rising above the white clouds covering the mountainous island.

The plume is now reaching altitudes of 2 miles (3 km), causing intermittent disruptions to local air traffic and spells of poor air quality. The eruption has not been energetic enough, however, to inject large amounts of dust into the stratosphere where they could have long-lasting effects on weather and climate, NASA said in a statement.

A build-up of ash and dust on the runway forced authorities in La Palma to close the island’s airport, according to Spain’s airport authority AENA. It has been the second time the airport has been closed due to ash build-up since the eruption began.

Scientists worry the eruption, Cumbre Vieja’s first in 50 years, may continue for months.

Tereza is a London-based science and technology journalist, video producer and health blogger. Originally from Prague, the Czech Republic, she spent the first seven years of her career working as a reporter, script-writer and presenter for various TV programmes of the Czech national TV station. She later took a career break to pursue further education and added a Master in Science from the International Space University, France, to her Bachelor’s degree in Journalism from Prague’s Charles University. She is passionate about nutrition, meditation and psychology, and sustainability.