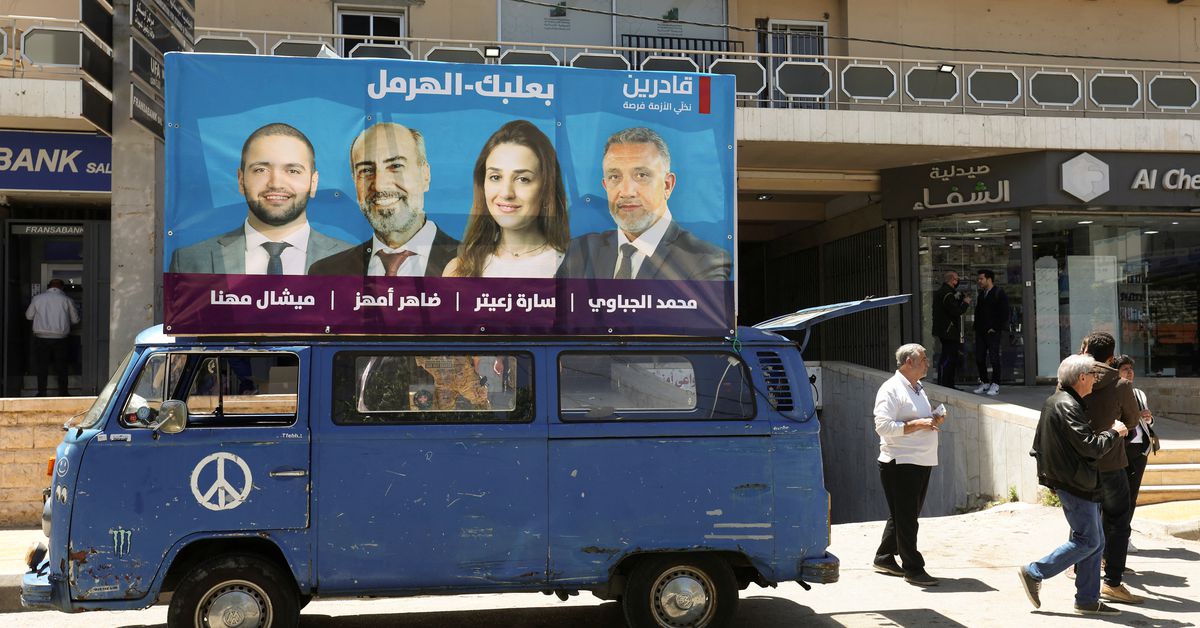 BEIRUT, May 13 (Reuters) – Shot by security forces during protests over the 2020 Beirut port blast and frozen out of his bank savings during Lebanon’s financial collapse, Firas Hamdan has plenty of grievances against the authorities.

On Sunday, Hamdan hopes to start changing things for the better by winning a seat in parliament, one of several newcomers hoping to break the hold that dominant sectarian politicians have on power at a May 15 parliamentary election.

The vote is part of a struggle between Lebanon’s political and financial elite and “the 99% who are victims in this society”, the 34-year-old lawyer said.

The election is Lebanon’s first since national finances imploded in 2019 – the result of what critics say is decades of state mismanagement and corruption – and since 215 people were killed and swathes of Beirut devastated by the port explosion.

Many demonstrators who took to the streets shortly afterwards blamed the disaster, investigations into which have stalled, on safety failings by top political and security officials.

“They knew!” was a popular slogan, a reference to the ruling establishment knowing about the presence of large amounts of ammonium nitrate at the port but doing nothing about it.

Senior political and security officials have said they were aware of explosive materials being stored there, but all deny responsibility for the blast.

With Lebanon in the throes of what the World Bank has called one of the world’s worst ever economic meltdowns, some analysts believe candidates opposed to established parties stand a better chance than ever of winning some of parliament’s 128 seats.

Lebanon’s sectarian political system is skewed in favour of established factions, and some commentators say newcomers have hurt their chances by failing to unite across the country around a single platform.

Maha Yahya, director of the Carnegie Middle East Center, said newcomers were disadvantaged by electoral regulations that force voters to travel to ancestral villages to cast their ballots, which leaves them more exposed to pressure from powerful local parties and is an expense many can’t afford.

“It creates an unfair playing field,” she said. Still, she added that a sizeable bloc of voices “not necessarily beholden to the current political parties” could be elected.

Hamdan said a win for any of the newcomers would mark progress: “Each person who gets into parliament is a victory.”

In the days after the Beirut port explosion, Hamdan, who is also a rights activist, was monitoring a crackdown by security forces on anti-government protests when he was hit in the chest by birdshot that pierced his heart, requiring surgery.

He blames security forces protecting parliament in Beirut. The force denied using such weapons in a public statement at the time and said this week it would not comment further on the matter.

Hamdan is running alongside like-minded candidates in southern Lebanon against politicians including Ali Hassan Khalil of the Shi’ite Amal Movement and Marwan Kheireddine, chairman of Lebanon’s AM Bank.

The judge investigating the blast has issued a warrant for Khalil’s arrest after he failed to show up for scheduled interrogations about what caused the accident.

Khalil, one of Lebanon’s most influential politicians and finance minister from 2014 until the economic collapse, denies involvement in the explosion and is one of a number of suspects who have sought the judge’s removal. He declined to comment further for this article.

Kheireddine’s bank is one of many that restricted depositors’ access to savings amid the economic collapse due to a severe dollar shortage at the centre of the financial crisis.

Those decisions caused widespread anger among swathes of depositors who have been dragged below the poverty line.

Kheireddine did not respond to a request for comment on the deposits or on the election more broadly.

In an interview with MTV Lebanon in 2020, he blamed the government, to which commercial banks lent billions of dollars, for mismanaging the economy.

When candidates running alongside Hamdan tried to launch their campaign last month near the southern port city of Sidon, a group of Amal supporters punched and kicked some of them and fired shots in the air, according to a Reuters witness.

Amal, a close ally of the Iran-backed Hezbollah movement who have centred their campaign on development and resistance to Israel, denied involvement in the incident.

Amal and Hezbollah have long dominated Shi’ite representation in a political system that has buttressed the influence of sectarian factions since the 1975-90 civil war.

Together with its allies, Hezbollah won a parliamentary majority in 2018.

Newcomers are challenging existing parties in all of Lebanon’s 15 electoral districts. Jad Ghosn, a former journalist, is running in an area dominated by Christian factions including that of President Michel Aoun.

The party he is running with, Citizens in a State, has set itself apart by campaigning on a single programme centred on fair distribution of financial-sector losses, of which ordinary savers have so far borne the brunt.

Ghosn contrasts this with the establishment and even some in opposition who are focused on divisive issues such as Hezbollah’s military capabilities.

“We are not simply running ‘against’ something. We are running ‘with’. There is a programme,” he said.

Sara Zaiter, a 32-year-old opposition candidate running in the northeastern Baalbeck-Hermel area, has encountered pushback from her own influential family clan. She lives in France but has come to Lebanon to campaign.

Relatives issued a statement to the media saying she did not represent them and that they are backing long-time lawmaker Ghazi Zeaiter, an Amal candidate on a Hezbollah-backed list.

Zeaiter, a former minister, has also been charged in connection with the 2020 port blast. The details of his alleged involvement have not been made public because the investigations are secret. He has denied wrongdoing and did not respond to a request for comment.

“The response of establishment parties is sometimes making us out to be traitors, sometimes fearmongering,” Zaiter said, pointing to two other candidates from her clan who withdrew their candidacies after the statement was issued.