School 2.0: How has the pandemic changed learning?

Home /Science/School 2.0: How has the pandemic changed learning? 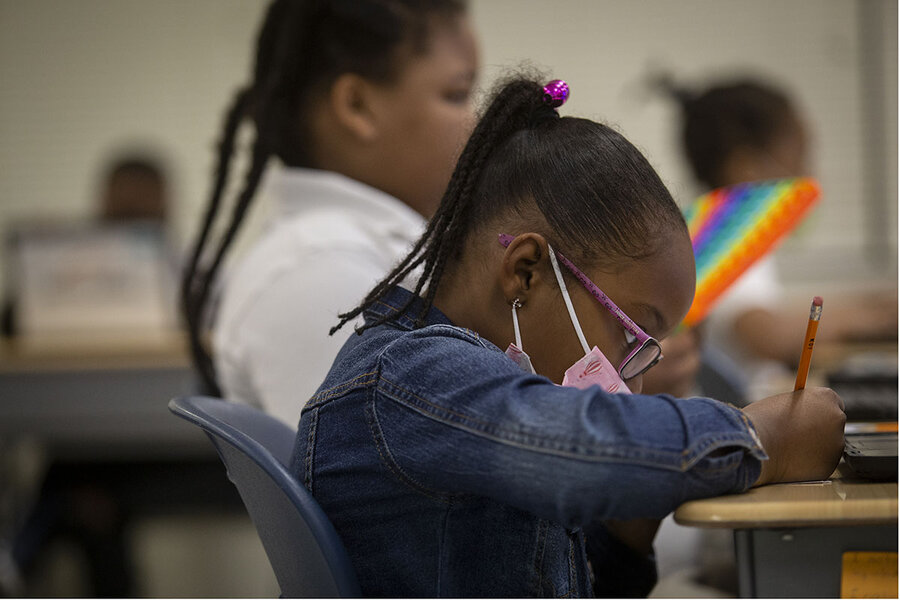 With classes back in session, experts say the quest to reimagine teaching and learning – which was urged during the pandemic – has resulted in modest changes like greater use of technology and tutoring. Some alternatives, such as virtual schooling and microschools, still attract supporters. And districts have started to give more attention to the mental health needs of students and teachers.

But the prolonged difficulties of navigating COVID-19 protocols, and the additional scrutiny of teachers because of culture wars, has left many educators and families exhausted and longing to return to normal. Those who want to see greater changes say that innovation, at least in the current education landscape, will take more time and persistence.

Has the idea of bringing innovation to public schools after the lockdown years come to fruition? The opportunity remains, but for now, small steps rather than big leaps guide progress.

“Our mindsets about what school looks like and feels like and how it should operate are pretty deeply embedded,” says Scott McLeod, a professor at the University of Colorado Denver. “It’s not that we’re going to snap our fingers and reinvent schools.”

“We can’t just wag our fingers at the system,” she says. “We have to create the solutions and bring these solutions to the table.”

Over the past three pandemic-interrupted school years, as educators scrambled to respond to the greatest disruption to schooling in over a century, a common refrain emerged: Don’t return to the way things were.

Scholars, policy makers, and school leaders have advocated for using the global health crisis as an opportunity to rethink and reinvent how education works in the United States, so that fewer gaps exist between kids of different racial and wealth backgrounds, and students are prepared with skills needed in the modern workforce.

With classes back in session, experts say the quest to reimagine teaching and learning has resulted in some modest changes, like greater use of technology and tutoring. Some alternatives, such as virtual schooling and microschools, still attract supporters. And districts have started to give more attention to the mental health needs of students and teachers.

Has the idea of bringing innovation to public schools after the lockdown years come to fruition? The opportunity remains, but for now, small steps rather than big leaps guide progress.

But the prolonged difficulties of navigating school COVID-19 protocols – and the additional scrutiny of teachers because of culture wars around instruction about race and gender – has left many educators and families exhausted and longing to return to normal. Those who want to see greater changes say that innovation, at least in the current education landscape, will take more time and persistence.

“Our mindsets about what school looks like and feels like and how it should operate are pretty deeply embedded,” says Scott McLeod, a professor of educational leadership at the University of Colorado Denver. “So trying to move those mindsets in new directions is really hard and long and slow and difficult work. It’s not that we’re going to snap our fingers and reinvent schools.”

People are nostalgic for pre-pandemic schooling, says Justin Reich, an associate professor of digital media at the Massachusetts Institute of Technology and director of its Teaching Systems Lab. School leaders face “powerful reasons to be pulled into retrenchment, but the old normal didn’t work for a lot of kids,” he says.

Teachers participate in a workshop meant to help them cope with the demands of the classroom, Aug. 2, 2022, in Concord, New Hampshire. Since the pandemic, schools are giving more attention to the mental health needs of educators and students.

Lakisha Young, a parent in Oakland, California, and CEO and co-founder of The Oakland REACH, an advocacy group, says parents in her city have the same goal now as they did in 2019: “Our community has never changed its fight and focus in terms of getting our babies to read,” she says, citing low literacy rates for students in Oakland Public Schools. Her group is recruiting community members to serve as “literacy liberator” tutors in the district.

Many parents are hopeful that this school year will finally feel regular. In a recent survey, 57% of parents said the upcoming school year will be better than the last for their child, according to a Harris poll released in August and commissioned by Lexia Learning, a company offering literacy products.

There’s also hope coming from some academic rebounding, including student growth last year that tracked with pre-pandemic learning rates. Yet overall student achievement remains a concern. Results from the National Assessment of Educational Progress – or NAEP – of 9-year-old students, released this month, showed the largest declines in math and reading scores in two decades.

“The reality is those needs are significant right now and not just for students, but for teachers,” says Robin Lake, director of the Center on Reinventing Public Education (CRPE), a research organization based at Arizona State University.

“This recovery was not something that was taken care of last year. This is going to be a very long-haul recovery, and we have to get ready to meet all those needs with less money [when pandemic relief aid expires in September 2024]. In every other sector those kinds of wicked problems call for innovation,” Ms. Lake says.

She suggests exploring different staffing models, such as team teaching, and working with community organizations to provide more options for students like mentoring, internships, or mental health support.

Susan Enfield, superintendent of the Washoe County School District in Reno, Nevada, says she needs to wait and see if her district and others around the country can implement large changes.

“I don’t know that any of my superintendent colleagues, nor would I, say that we have met that challenge to radically transform how we essentially do schools in our public schools,” says Dr. Enfield. “That doesn’t mean we haven’t made some changes and some things are different, but I don’t think we’ve seen a wholesale translation in the way that many of us dreamed or hoped would happen.”

Better use of technology to engage with parents, such as offering remote participation for back-to-school nights and parent-teacher conferences, is one change Dr. Enfield cites. She hopes for bigger revisions, like reevaluating the traditional school calendar and finding ways to assess learning that happens outside of school – such as students spending more time with relatives to deepen understanding of home cultures.

The upcoming school year might result in more innovations due to educators finally catching their breath after being in “survival mode” the past few years, she suggests.

Abigail Schneider engages with a learning game on a laptop in her bedroom as her mother, April, steps toward the doorway, December 2021, in New York City. Greater use of technology, for both student learning and partnering with parents, is among the ways education looks different than it did before the pandemic.

Chris Gaines, superintendent of Mehlville School District in suburban Missouri says his district used to offer virtual classes for high school students only, but now offers its own standalone virtual school for elementary and middle school students. The elementary school enrolls about 15 to 20 students per grade for kindergarten through fifth grade, he says.

“The demand was there from parents and students for virtual school,” Dr. Gaines says.

He is also talking with colleagues about how the district might reimagine senior year of high school. Initial ideas include letting students earn more credits in earlier grades and over the summer, so that they have more flexibility for Advanced Placement classes, dual-credit classes with community colleges, or apprenticeships.

The popular areas where schools are investing their share of the roughly $190 billion in pandemic relief funding from Congress include staffing, summer programs, social and emotional learning materials, and HVAC systems, according to an analysis by Future Ed at Georgetown University. Data released recently from CRPE suggests that large, urban schools are investing in facility and technology upgrades, and social-emotional supports.

Yet a majority of superintendents expect they will decrease or end current summer learning and enrichment activities after relief funding expires, according to a July survey from AASA, the School Superintendents Association.

“In general I would say we see school districts experimenting, but within the box of traditional schooling,” says Ms. Lake, from CRPE, of the overall approach educators are taking.

“We have to create the solutions”

Outside of public schools, some individuals say they’re taking lessons from the pandemic to create new educational models that they hope will serve increasing numbers of students.

Sal Khan, founder of Khan Academy, the popular online company with free instructional videos, sees a future for virtual learning. In August he launched Khan World School, a virtual school, in partnership with ASU Prep Digital, an accredited online school at Arizona State University. Khan World School will start with 52 ninth graders this year and plans to expand up to grade 12.

When the pandemic hit, “it was clear that, generally speaking, remote learning wasn’t being done well,” says Mr. Khan. He wanted Khan World School to “show people that online doesn’t have to be this mind-numbing experience – it can be quite engaging.” The school runs a daily seminar, promotes student mastery of topics, and allows for flexible schedules.

Amar Kumar says he believes learning pods will outlast the pandemic. In 2021, he launched KaiPod Learning, which operates in Arizona, Georgia, Massachusetts, and New Hampshire and has enrolled 124 students in grades three through 12. His company charges tuition and provides logistical support for families who don’t want to run a pod, or small learning group, themselves. Mr. Kumar envisions more partnerships with public school districts. In New Hampshire, the state education department pays the tuition for students enrolled in KaiPod learning centers.

“I think the real long-term potential might be for traditional schools to see pods as pathways in their systems,” says Mr. Kumar.

Declining enrollment in public school districts may compel them to experiment more, says Michael B. Horn, author of “From Reopen to Reinvent: (Re)Creating School for Every Child.” “That will put more pressure on traditional districts to say we’ve got to innovate. Otherwise we’re losing students, losing dollars, and the staff that comes with it,” Mr. Horn says.

Professor Reich from MIT spoke with students and teachers in 2021 for a report he co-authored, “Healing, Community, and Humanity: How Students and Teachers Want to Reinvent Schools Post-COVID.” Students discussed how schools could address their social isolation and foster the autonomy many felt they developed during remote learning.

“Nobody has all of the answers, but we often do not attend to the wisdom that our students have,” says Professor Reich. “When you take young people seriously they will give you serious, thoughtful answers to your questions about educational systems, and they can be powerful partners in making them better.”

A key element for improving schools is encouraging community members to form alliances with districts, says Ms. Young from Oakland.

“I think it’s critical if we don’t want these systems to go back, those of us that are somewhat on the outside need to push in harder with solutions,” she says. “We can’t just wag our fingers at the system. We have to create the solutions and bring these solutions to the table.”