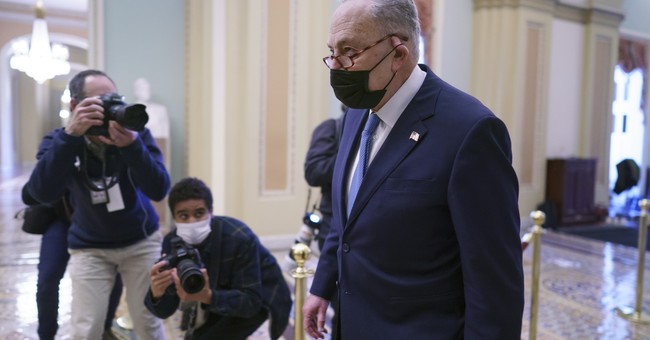 The fallout from Senate Majority Leader Chuck Schumer’s anti-Republican rant is continuing to build, as now one Republican is claiming that Democrats were so embarrassed that they’re privately apologizing to him.

As previously highlighted by RedState, Schumer asked Republicans for an extension on a debt limit vote with a short-term extension. Senate Minority Leader Mitch McConnell agreed and gave Schumer what he asked for, only to watch Schumer turn around and, in a fiery floor speech, condemn Republicans for creating this debt crisis and pretending that Democrats got the extension all on their own.

It was a moment that was so embarrassing and unwarranted that West Virginia Senator Joe Manchin can be seen behind Schumer visibly reacting with his face in his hands, shaking his head. He went on to walk out on the speech, telling reporters that “civility is dead.” McConnell also penned a letter to President Joe Biden telling him that if Democrats needed any Republican help in the future to deal with problems they created, they can forget about it.

“I am writing to make it clear that in light of Senator Schumer’s hysterics and my grave concerns about the ways that another vast, reckless, partisan spending bill would hurt Americans and help China, I will not be a party to any future effort to mitigate the consequences of Democratic mismanagement,” wrote McConnell.

It’s a move that likely put the Democrats into an even worse situation as, while they now have more time to figure out how to deal with the debt crisis, they’re still no closer to solving it — and now they don’t have Republicans to help.

But it gets worse for Schumer. It would appear Schumer’s fellow Democrats are recognizing his toxicity went too far and, according to the New York Post, Republican Sen. John Barrasso of Wyoming is getting apologies from his leftist colleagues.

“It was a tantrum by Chuck Schumer and he is known to be a bully. He loves to bully even his own caucus. And just looking at Joe Manchin, how disturbed he was by what happened, a number of Democrats came up to me, including calling me over the weekend to apologize for the terrible behavior of Chuck Schumer,” Barrasso told Fox News on Sunday.

Barrasso added that if they want to extend the debt ceiling again, Democrats will have to do it through the reconciliation process, saying Democrats are “entering their winter of discontent.”

Barrasso’s claim holds water, as we’re beginning to see more and more infighting amongst Democrats as we draw closer and closer to midterms. Moderate Democrats and extreme leftist Democrats are already pointing fingers at one another over the imminent loss of power in what will likely be both the House and Senate. Both are blaming the other for the oncoming loss of power, with the infrastructure bill being chief among their contentions.

(Falling Apart: Democrats Already Finger Pointing at Each Other Over Upcoming Midterm Losses)

It’s unclear what Schumer’s end goal was with his attack on Republicans. While it may give the press something to chew on and curse Republicans with, it’s not going to help Democrats when the time comes to deliver results. At some point, Democrats will be forced to answer for their failure, and pointing to Republicans won’t work.