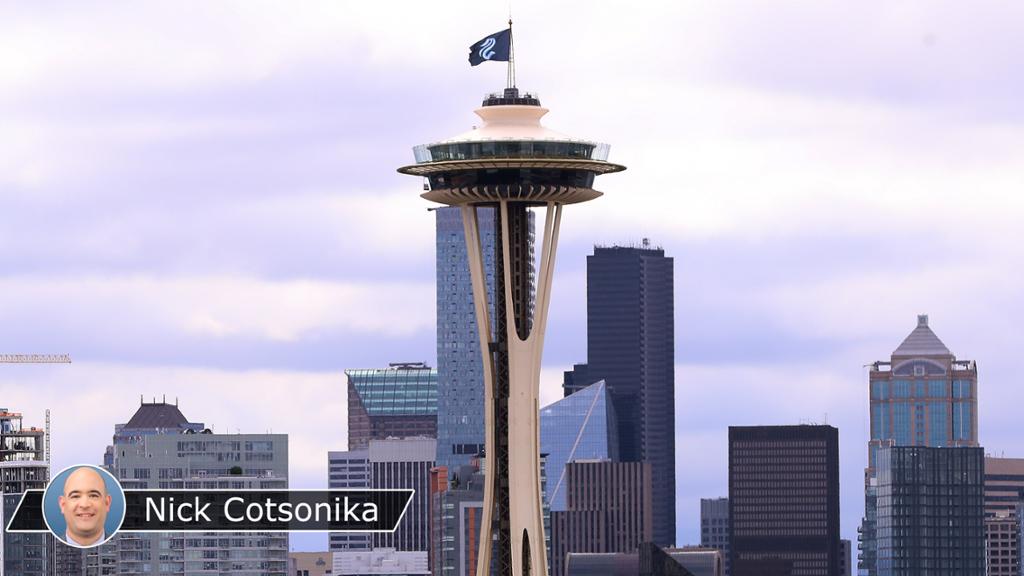 The 2021 NHL Expansion Draft presented by Upper Deck will do more than reveal the initial roster of the Seattle Kraken.

There will be celebrities and fans in a park overlooking the skyline, and there will be visits to local landmarks like Pike Place Market, where fish mongers are famous for tossing the catch of the day through the air.

The expansion draft was once a staid affair in a hotel conference room. But when the Vegas Golden Knights joined the NHL in 2017-18, it was held in conjunction with the NHL Awards at T-Mobile Arena on the Strip.

That showed the expansion draft could be more than the announcement of names, and that inspired the NHL to do something unique for Seattle.

“We wanted to make this an event,” Mayer said. “That was the goal.”

Two problems: How do you plan an event when you don’t know if fans will be able to attend because of the coronavirus pandemic? How do you put on an entertaining show when you won’t know who the stars will be until shortly beforehand?

The NHL decided to hold an outdoor expansion draft, partly because Climate Pledge Arena is under construction and won’t open until October, partly in hopes of hosting a crowd.

Mayer said more than 4,000 fans are expected at Gas Works Park on the north shore of Lake Union directly across from downtown, and the weather forecast calls for sunshine with a high of 69 degrees.

“When we started talking about this, the world was still in the pandemic, but we definitely wanted to do something that was fan-facing,” Mayer said. “And then as the world started to open up, we got super excited that this was a possibility.

“And now to have it all come to fruition where we’re able to bring in fans and we expect a pretty huge crowd, that, to me, makes it feel like it’s going to be big.”

Chris Fowler, Dominic Moore and Kevin Weekes will be on stage to host ESPN’s first NHL TV event under the new U.S. media rights deal that begins with the 2021-22 season.

Hollywood producer Jerry Bruckheimer, a member of the Kraken ownership group, will take part. So will Kraken scout Cammi Granato, a member of the Hockey Hall of Fame. There will be Seattle recording artist Macklemore, frontline workers from Virginia Mason Franciscan Health, construction workers from Climate Pledge Arena and more.

“And then we’re going to hopefully have a few players live who will come out and for the first time ever be in front of the Seattle crowd, and you’ll hear from them,” Mayer said. “It’s going to be really cool. There’s going to be some big announcements that are going to happen during the show that also will make some news.”

Mayer and his staff have to plan the event without knowing for sure who the players will be until Tuesday or Wednesday, preparing highlights and scripts for all the players who could possibly be selected.

They plan to reach out to some players to try to book travel. The Kraken announced players will reveal the home and away jerseys, which will go on sale Sept. 15.

“That’s a last-second, ‘Hey, congratulations, you’re now a new member of the team. What are you doing tomorrow?’ ” Mayer said. “There’s a little of that. That’s a piece of this. We’re really hoping that between four and five players are actually here in person, but as of press time, nothing’s confirmed.

“It doesn’t worry us for even half a second. As a production team, we’re just ready for whatever gets thrown at us. We’ve got a really good team that’s done these things before and can adjust on the fly.”

Seattle has been waiting for this moment since Dec. 4, 2018, when NHL Commissioner Gary Bettman announced the city would receive an expansion team.

When Mayer and his staff arrived the other night, they went to grab some pizza. The first five people who came in after them were wearing Kraken gear.

“If you’ve got a new member of the Seattle Kraken, it doesn’t matter who he is, he’s a star,” Mayer said. “That’s the craziest piece of this. They are so into this here. Like, this is huge. All they yearn for is to find out, like, who are the guys they are actually going to be cheering for, you know?

“When you really take a step back, it’s the making of a team, and it’s the first step.”