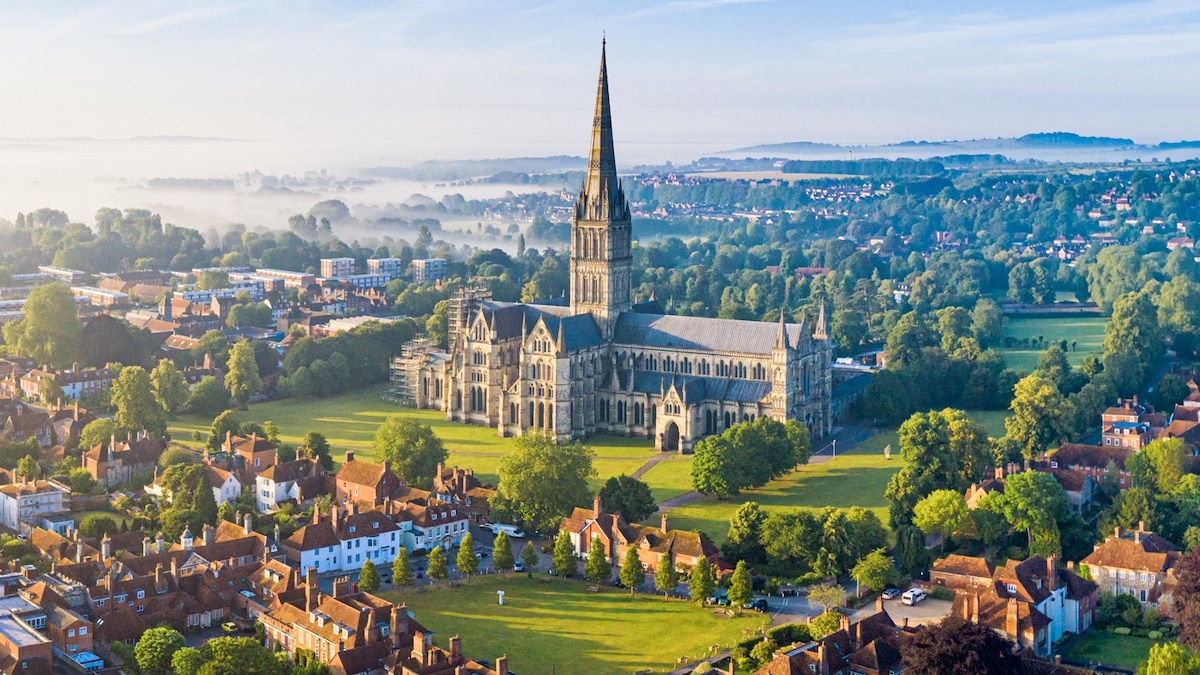 When the work of a stonemason goes unnoticed, it’s a noteworthy accomplishment. Such is the paradoxical calling of stonemasonry, a fading craft that was not only essential in the rise of global architecture, but also one that remains crucial to the preservation of countless sacred and iconic sites.

Over the centuries, even the most solid stone crumbles. England is home to innumerable historic sites always in need of assessment and maintenance, from the Neolithic Stonehenge to Roman-era sites like the thermae of Bath, which date to the first century A.D.

Deeply entwined with the history of Christianity, Britain has 42 grand cathedrals, only 10 of which still have stonemasonry yards. The skilled stonemasons who work there stand between these celebrated and important sites and the persistent erosion of time.

“There is so much heritage. We must look after it,” says Joe O’Connell, an apprentice stonemason at Salisbury Cathedral. “Stonemasonry is a dying art, so I feel a lot of responsibility to learn and pass that on.”

The work takes a long time to learn and is largely left unrecognized. But as it became clear in the aftermath of the fire that destroyed Paris’ Notre Dame in 2019, restoration work is crucial to protecting our most celebrated cultural icons.

Most stonemasonry methods have not changed in more than 800 years, though contemporary problems like acid rain compound age-old challenges like water damage. Stonemasons still work with a hammer and chisel and still learn centuries-old practices, like how to prepare rough stone from the quarry, and use mortar with lime.

At Salisbury Cathedral, travelers can help support this work while getting a behind-the-scenes look at stonemasonry at one of the most important Gothic structures in Europe. From a two-day course on stone carving to tours along the scaffolding to see restorations in progress, visitors can witness this important work up-close.

The artful craft of stonemasonry

Some 90 miles southwest of London, Salisbury Cathedral’s clerk of works Gary Price is in the drawing office, the center of the cathedral works department. Demonstrating how old cathedral stones are examined, he taps each with a metal dowel, listening for a distinctive dull tone that signifies decay. After assessment, each stone gets a works card detailing its condition and is color-coded by priority.

“There’s a fine balance between conservation and replacement. Rather than replacing the stone, we are trying to conserve the heritage. But sometimes you can’t, unfortunately,” says Price, who first joined Salisbury as an apprentice in 1986. “In a few hundred years, the next generation will conserve the stones we’ve replaced and replace the stones that we’ve conserved. So there’s always new stone being added into the cathedral.”

So how do stonemasons decide what to fix? First, scaffolding goes up, then the stonemasons climb up for a visual inspection. Then, by tapping a metal rod as Price demonstrated in the drawing office, they make an important determination in situ: if the stone is 60 percent complete, they will try to conserve it without removing it. If less, they will replace it.

(From mosque to cathedral, this place of worship in Córdoba tells the city’s story.)

It takes at least six years to become a master mason. In the early 2000s, Cathedral works programs developed a two-year degree course in stonemasonry with specialized modules such as archaeology, carving, and stone selection. This year, 14 masons commenced the nationwide program.

“You have to understand how these buildings were originally built. We need an intimate knowledge of the same skills they used to make sense of what they did,” says Pascal Mychalysin, master mason at Gloucester Cathedral. He adds that while artificial intelligence could one day replace artisans like him, that would be “a loss for mankind.”

“It is very important to retain these traditional skills. If we disappear, it will be as bad as losing a language. That is what is at stake. This is why we have dedicated ourselves to the Cathedral Workshop Fellowship so these skills can be retained.”

The stonemasons of Salisbury

The tallest in England, Salisbury’s spire can be seen all over the city. Inside, visitors can inspect the stonework of the grand medieval structure, adorned with carvings and elaborate stained glass windows. The cathedral is home to one of four original copies of the Magna Carta, the world’s oldest working clock (dating to 1386), and a medieval cloister where the sounds of the organ flow through the arches.

The limestone used in Salisbury comes from Chicksgrove Quarry, 14 miles away and close to where the original stone was excavated to build the cathedral in the 13th century. “We think an 800-year-old building is old, but this stone is much older,” says Price, one of just nine stonemasons responsible for maintaining the buildings of Salisbury Cathedral. “It’s upper Jurassic limestone and is 150 million years old. Sometimes we find fossils in the stone.”

A stonemason’s job is far from one dimensional. In addition to his responsibility of purchasing and assessing stone, Price maintains the aviation obstruction light on top of the 404-feet-high cathedral spire. To change the lightbulbs and maintain the spire, he exits a tiny door 30 feet from the top, climbs an exterior ladder, steps over the capstone, and attaches himself to the cross on the summit to make repairs.

Peregrine falcons nest in the spire, and Price is tasked with periodically clearing their mess from the stonework so it doesn’t damage the cathedral. Sometimes he finds rings from local racing club’s pigeons among the debris—evidence the falcons had themselves a snack.

Apprentice O’Connell blogs about his work at Salisbury. He spent his first six months learning the foundational technique to square off and make a perfect cube from a stone block. That fundamental skill is like “a stonemason’s driving license,” he jokes.

“I love medieval buildings and I like working with my hands,” says O’Connell, who studied medieval history and applied for the stonemasonry apprenticeship during the pandemic. “It’s the quietness, the concentration, and it’s a practical job.”

After mastering the technique to craft a perfect 7-inch cube, he’ll turn it into a sphere, another important skill. Eventually, O’Connell plans to carve a birdbath. “You definitely learn from your mistakes. I must have done each side three times,” he says. “You see people turn out things in a couple of days here. But before speed comes accuracy.”

Head stonemason Lee Green guides visitors onto scaffolding to get a close-up view of a complex restoration on the eastern side of the cathedral that began in 1987 and is now coming to a close. The eastern part of a church is considered the most sacred, as it traditionally contains the altar (so the congregation can face the direction of the rising sun, a symbol of Christ and the Second Coming) but attention is often focused on the west side of the building, where people enter and are greeted by elaborate designs.

Price cut the first replacement spire stone in 1987 and is now overseeing the end stages of the restoration work. “Making the cuts in the first spire stone was a really big deal. Prince [now King] Charles came and fixed that stone in 1987 with a silver trowel,” he says. “But it was nice that he came and visited and I’ve met him twice now. That was early on in my career, which I didn’t really appreciate until later.”

Each mason leaves their mark, a signature carved into stone—usually a play on their initials. Green points out a small dragon carving that has been restored on a coping stone (stones installed on the brickwork as a finishing touch and to deflect water from the building). Now he is working on a similar piece with a ferret design.

“It’s a quirky little thing that nobody can see from the ground. But the stonemason knows it’s there, and it’s about putting your mark on the cathedral. It has to be a Gothic design, but you can add touches.”

In fact, the entire cathedral stands as artful evidence of a highly skilled craft—but that often remains unsung. “When we take the scaffolding away, people ask us what we have been doing as they can’t see a difference,” says Green. “But that’s how we like it. We like our new work to blend in with the old.”

On Tuesdays from 10:30 a.m. to 12:30 p.m., visitors can see stonemasons at work and ask them questions. For a fee, the cathedral’s stonemasonry works yard tour takes visitors from the yard where blocks are selected through the drawing office and also offers a carving demonstration. The cathedral’s among the parapets tour offers visitors a chance to get up in the scaffolding on the structure’s east side and into the hidden workshop used by masons for centuries.

Visitors can also sponsor a stone at Salisbury which will be carved by the masons, and include the sponsor’s initials. The sponsor receives a map giving the exact location of the stone and in some cases can see it being installed in the cathedral.

Rachael Rowe is a writer based in southwest England.