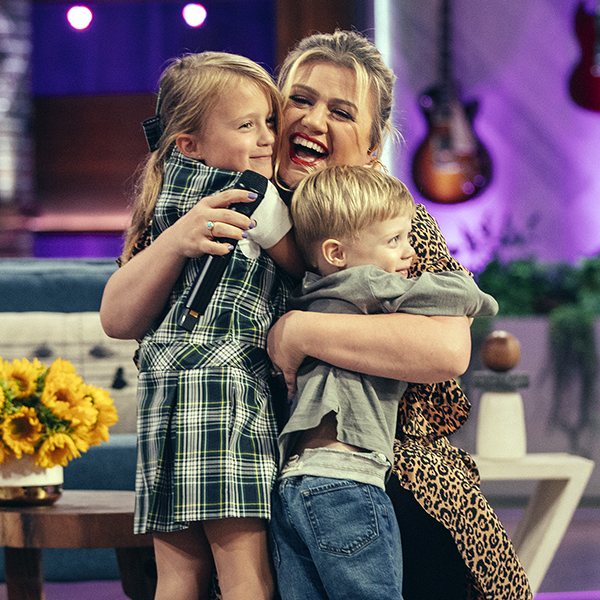 When nature calls, you just have to pick up!

In a preview for the first episode of The Kelly Clarkson Show‘s third season, host Kelly Clarkson had some very special guests in attendance: daughter River, 7, and son Remington, 5. Additionally, Chris Martin from Coldplay stopped by and performed his hit song, “Yellow.” However, it was during his performance, and as Kelly and River were singing along, that Remington made a rather important announcement mid-lyric.

The 5-year-old seemed to be deep in serious thought before hilariously announcing, “I need to go to the bathroom!” Meanwhile, Chris did not miss a beat while strumming his guitar, and also sweetly chimed in to agree, saying, “Me too!”

The guest appearances from Kelly’s cutest little co-stars comes almost two months after the singer shared the most adorable pic of the three enjoying a trip to Disney World earlier this summer.

Kelly shares River and Remington with ex-husband Brandon Blackstock, who she filed for divorce from in June 2020 after nearly seven years of marriage.

The “Walk Away” singer has spoken openly about their split, even going as far as saying that she “can’t imagine remarrying.”

“Yes, I’m willing to share my experience and yes, it is the worst,” Kelly shared of her experience to Entertainment Tonight in an October interview. “I mean, the past few months have been horribly sad.”

Nearly six months after filing, a court granted the American Idol alum temporary primary physical custody of their two kids. And just last month, Kelly proved she was even more ready to move on by filing to restore her maiden name following the couple’s split.

(E! and NBC are part of the NBCUniversal family).