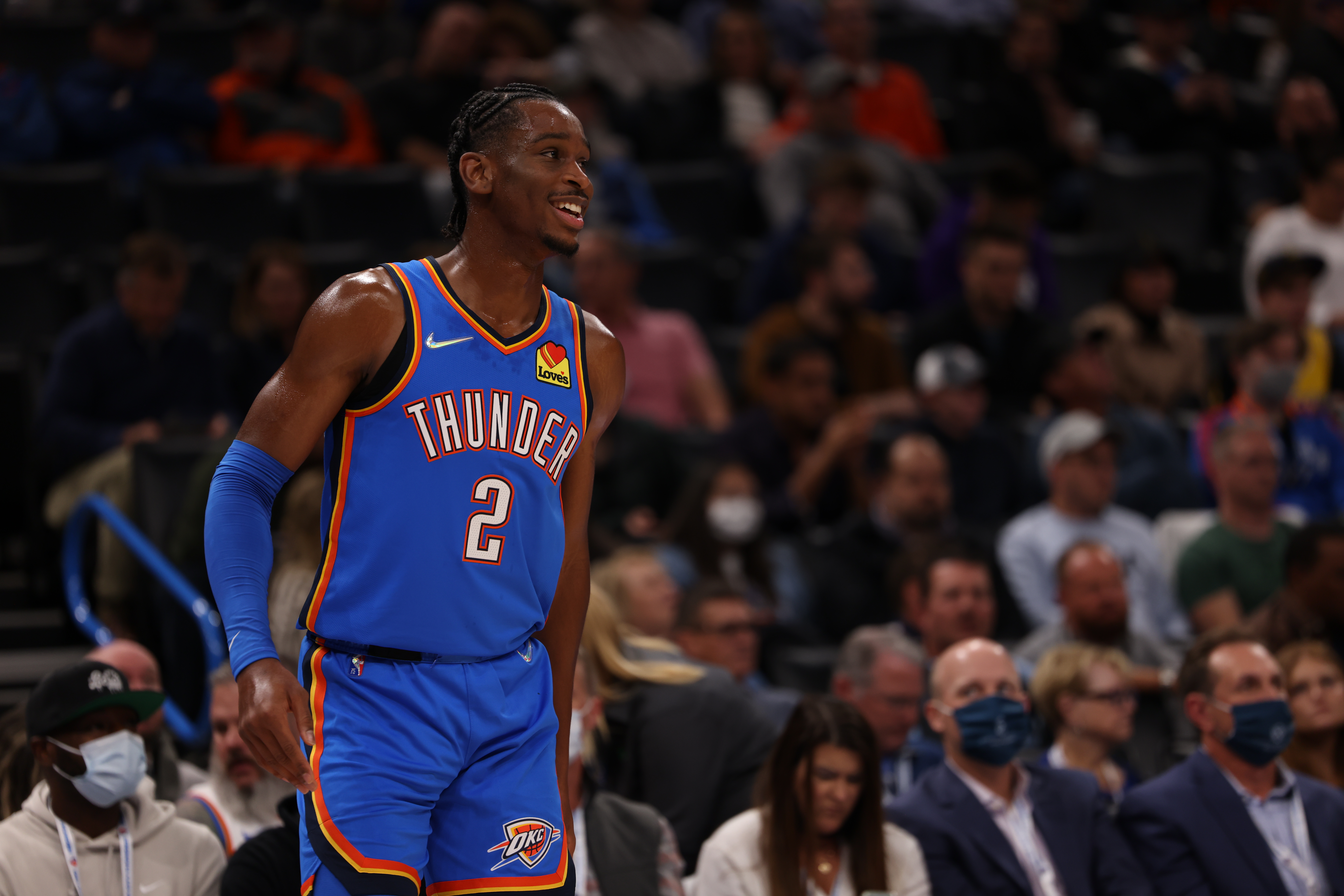 The Oklahoma City Thunder got their first win of the season, defeating the Los Angeles Lakers at home 123-115. Shai Gilgeous-Alexander led the Thunder with 27 points as they improved to 1-4 this season.

Oklahoma City trailed by as many as 26 in the first half before storming back. The Thunder outscored Los Angeles 67-43 after halftime.

FROM DOWN 26 WE ARE UP 2 ENTERING THE FOURTH

The Lakers, who were playing without star LeBron James because of ankle soreness, fell to 2-3.

Anthony Davis, who was questionable for Wednesday’s game with knee soreness, led Los Angeles with 30 points. Russell Westbrook recorded his first triple-double of the season but also had 10 turnovers and was ejected at the end of the fourth quarter in the loss.

The Lakers entered Wednesday’s game with the second-worst defense in the NBA (118.8 opp. points per game), so despite their early lead, it felt like just a matter of time until the Thunder would get things going. Oklahoma City scored a season-high in points largely thanks to Los Angeles’ lack of focus on the defensive end.

Gilgeous-Alexander was bottled up in the first half with only nine points, but he exploded for 17 in the third quarter. He used his quickness to keep the veteran Lakers guards off balance as he drove to the basket and got his outside shot going.

Don’t miss this one on NBA League Pass ⤵️https://t.co/5QqkBhf1W0 pic.twitter.com/1LZzzEmT7J

As the youngest team in the NBA, the Thunder will need nights like this where they use their youth and speed to exploit veteran defenses. Winning won’t be easy to come by this season for Oklahoma City, so wearing down older teams could become a go-to strategy to scratch out some victories.

Lakers Dominate Inside the Paint Early, Lose Focus in the 2nd Half

Before giving up their lead, the Lakers did most of their damage on the inside throughout Wednesday’s contest. Whether it was the size of Davis and DeAndre Jordan or the drives to the basket by Westbrook and Malik Monk, Los Angeles got easy shots near the basket early and often.

The Lakers scored 38 of their 72 first-half points in the paint. Westbrook and Rajon Rondo saw the openings to throw lob passes for flashy alley-oops.

Russell Westbrook’s thrown several successful alley-oops already, towards his 9 assists, the latest getting Carmelo Anthony a dunk that put LAL up 49-24 at the 9:27 mark of the 2nd Q.

It was a smart game plan for the Lakers to pound the ball inside, but they went away from that when the Thunder made their comeback in the third quarter. Los Angeles had only six points in the paint during that period. Without having to be worried about being bullied on the inside, Oklahoma City clawed its way back into the game.

Last night, Russell Westbrook took 18 of his 27 shots in the paint.

Tonight, just 5 of his 17 attempts have come in the paint.

It seems like Los Angeles is still figuring out its identity on offense. The Lakers entered Wednesday’s game ranked fifth in the NBA in three-point shooting (39.7 percent).

With a star big man like Davis, Los Angeles would be wise to continue to use its inside game to open things up for its outside shooting to provide some balance on offense. The Lakers will have to figure out what type of team they want to be if they hope to contend for their second NBA title in three years.

The Thunder will enjoy a couple days off before returning to action Saturday in a road matchup against the Golden State Warriors. The Lakers will look to bounce back at home Friday against the Cleveland Cavaliers.