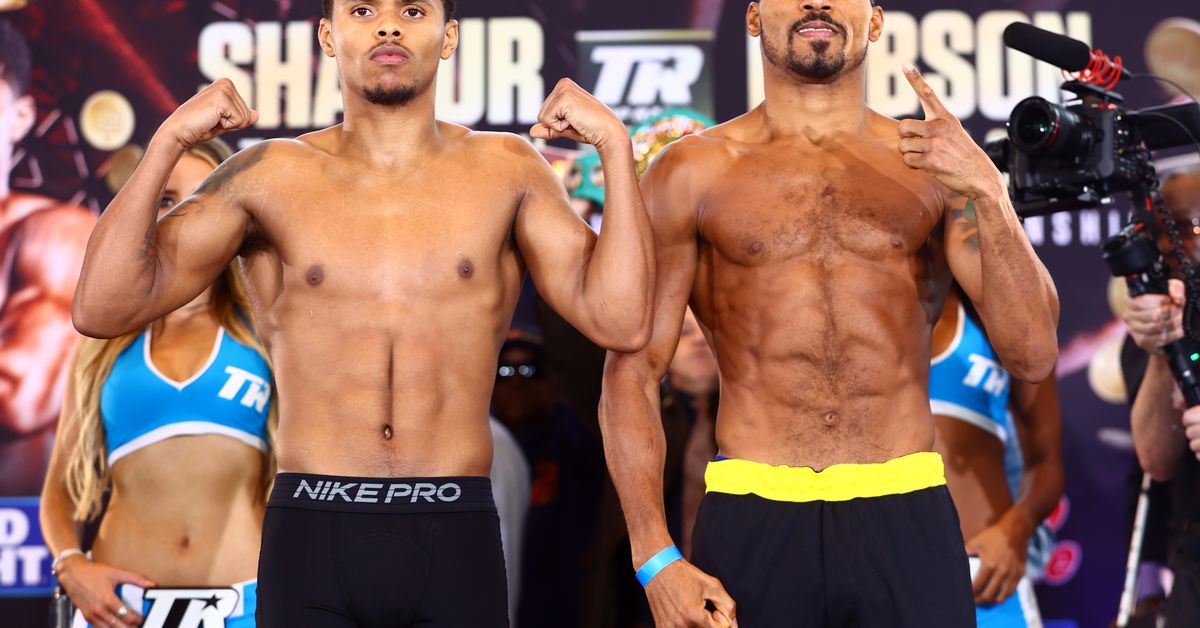 Shakur Stevenson lost his belts on the scale, but tonight’s main event in his hometown of Newark still goes ahead, with his opponent Robson Conceicao hoping to snatch the now-vacant titles up.

Stevenson – 18-0-0, 9 KOs- may no longer fit into the division- and has already announced he will move up after this- but he wants to cement his status as the best fighter at the weight and prove he belongs on the pound-for-pound lists. Conceicao meanwhile wants to gatecrash the party after a slow start to his pro career. Both will be looking to put some slick boxing skills to use to prove their superiority.

This post will provide live play-by-play of the main event. The preliminary card starts at 6pm ET on ESPN+, the main card begins at 10pm on ESPN and ESPN+

update: the main card will be delayed till the conclusion of the football on ESPN. New estimated start time around 10.45 ET

Round 1- Conceicao opens with jabs to the body. Stevenson respons upstairs, but Conceicao’s looking to push forward a bit early. Shakur brings his jab into play. An expectedly cagey opening, but both men are trying to take center ring here. Stevenson stings Conceicao with a left, and again a few moments later. Conceicao tries to counter, but the speed is already a problem early. Tries to land right to the body, Stevenson blocks. 10-9 Stevenson

Round 2- Conceicao opens the round throwing 1-2s, trying to work the body. Some land, but mostly Stevenson evades or blocks. Continues to push, but pressing really isn’t his game, he’s reaching hard, and as the round goes on, Stevenson begins to counter. Stevenson ends the round pushing the Brazilian back. 10-9 Stevenson, 20-18

Round 3- Conceicao really going against type here, and taking the lead. It’s getting him in trouble, with some excellent counter work from Stevenson, but this is a far more exciting fight than we might have feared. Further counters upstairs sting him again and he ends the rounds pushed back. 10-9 Stevenson, 30-27

Round 4- Stevenson comes out pushing forward, takes a right hand upstairs for his trouble. Continues to be the aggressor though, working the body and head. Conceicao goes down, it’s a slip, but he’s not fully steady as he stands up. The bodywork really taking a toll, too. Conceicao really only getting single shots off. A counter left gives Stevenson something to think about, but he’s down on the bell, looks like from a bodyshot. Weird sequence, but 10-8 Stevenson, 40-35

Round 5- Replays showed a delayed reaction caused the KD in the last round. In any case, Conceicao isn’t giving up, and landing some of his own bodyshots, but he definitely wasn’t expecting this pace from Stevenson and at the moment can’t live with it. A fantastic left hand to the body leaves Conceicao holding on. Stevenson ends the round pushing him back once more. 10-9, 50-44

Round 6- Stevenson leans back to let Conceicao miss, then counters to the body. Having spent a few rounds on the defensive, Conceicao tries to take the lead again, this time upstairs, but some clean head movement sees him miss and, once again, countered. Stevenson takes a warning from the refereefor some mucking about in the clinch, responds by letting Conceicao take the lead, and countering him as he overcommits. Conceicao hurt, and ends the round in survival mode. Stevenon’s lead right hand can barely miss, and his left isn’t far behind. Conceicao tries to counter, but Stevenson’s range is immaculate and he falls short. 10-9 Stevenson, 60-53

Round 7- This rounds starts as the rest went- Conceicao furious and trying to make something of it, but outclassed and outgunned. Can’t deal with Stevenson’s speed. Down midway through, though ruled a push. Stevenson catching or slipping all the work, and cutting off the ring well to close the round. He’s turned into a pressure fighter, none of us expected this. 10-9 Stevenson, 70-62

Round 8- The ringside doctor took a look at Conceicao between rounds. He’s ok to continue, but he’s taken a beating so far. Stevenson’s been landing his left hand at will and with power. Conceicao comes forward with three and four-punch combos, but all of it misses. Stevenson taking this round off a bit, but he’s still landing more work. Conceicao looking to get rough now. Gets himself spun around, Stevenson lands to the back of the head but they continue. The Bracilian tries to push forward to end the round, but Stevenson spins him, cracks him with a left upstairs, and he visibly wobbles as he walks to his stool. Stevenson 10-9, 80-71

Round 9- Stevenson invites Conceicao forward to start the round, then wobbles him with a sneaky right as he steps around. It gets rough in the middle of the round and Stevenson shows his frustration by throwing Conceicao to the floor. Point deduction. Responds to that by backing off a little, but now takes the lead again, trying to beat Conceicao to the punch. The Brazilian did have a little more success here, 10-8 Conceicao with the deduction, 88-81
Round 10 They meet in the middle. Stevenson seems to have let his frustrations get to him, throwing every punch with full steam. That’s giving Conceicao more chance to counter. Another hip toss, no point this time but a strong telling off. 10-9 Conceicao, 97-91

Round 11 – Stevenson seems to have calmed down now. Opens with a hard counter that stops Conceicao in place. Cagey in the middle of the ring, then a double left hand wobbles the Brazilian again. Conceicao very hesistatnt to throw now, so Stevenson pot-shots, head and body. Much calmer round and if he lost the momentum he’s got it back. A right hand sends COnceicao reeling across the ring. Stevenson doesn’t fllow up directly, seemingly reluctant to fall into another clinch, but he’s clearly won that round. 10-9, 107-100

Round 12- Stevenson looks content to sit at range and let Conceicao come to him now. Which he does, as he must. Couple of counters hurt, after which Stevenson does push him back again. Exchanges in the middle of the ring, and Stevenson slips. Last 30 seconds sees Stevenson landing lefts, and they fall into the ropes as the fight ends. 10-9 Stevenson, Final score 117-109 Stevenson.

WBC/WBO Super-featherweight title: Shakur Stevenson vs Robson Conceicao
The titles are only available for Conceicao to win after Stevenson missed weight