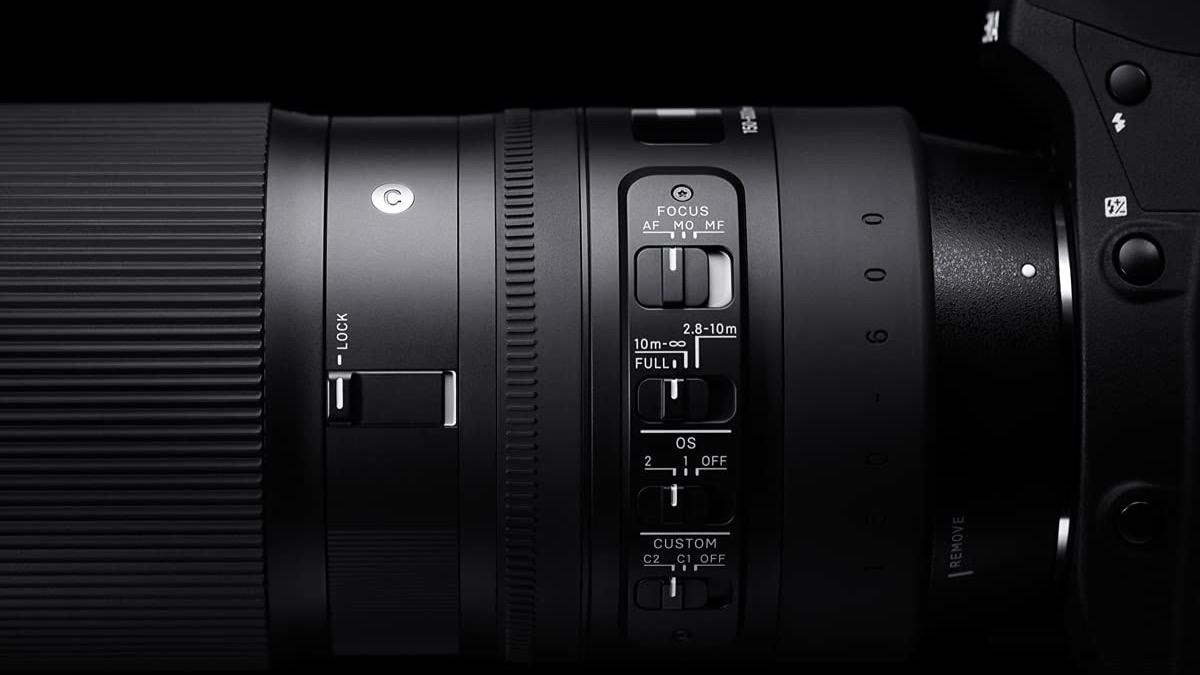 The Sigma 150-600mm f/5-6.3 DG OS HSM has all the reach you’ll ever need for deep sky space photography — just make sure the rest of your gear is ready to support this monster rig.

If there’s one thing we all want, it’s spectacular deep-sky images. Bustling, far-away nebulae, rendered in gorgeous, noise-free color, released to the chiming of a hundred notifications on Instagram. Lovely.

If that’s what you want from your astrophotography, though, you need to be ready to learn. You also need to be prepared to commit to some seriously niche gear. Wide-field astrophotography, think the Milky Way arching over a landmark or the moon, appearing to perch on the spire of a church. This already needs fairly specialist gear. Ultra-wide, often prime lenses, are perfect for this kind of work.

For deep-sky astrophotography, what you need is reach, and lots of it. We’re used to seeing adapters allowing DSLRs to be attached to telescopes, but what is there for photographers who want a lens that can be used to shoot astrophotography as well as day-to-day subjects?

Internally, the lens has 20 elements in 14 groups, with the large front element blessed with an oleo-and hydrophobic coating that should see off water and oil. The front element in question has a 95mm filter thread on it.

You get a lens hood that proves useful in day-to-day use, but which you’ll likely want to avoid if you’re mounting this lens on a star tracker due to its weight. A quick visit to the Space.com scales reveals the hood adds a shade over 100g to the lens’ weight. This isn’t much, but every little adds up.

There are plenty of controls on the lens, many of which can be customized further using Sigma’s innovative USB Lens Dock  — about $50, and which gives you access to both customization and firmware updates. By default, you get the standard autofocus/manual focus/hybrid switch, as well as a focus length limiter allowing you to limit the 150-600mm’s focus distance to either infinity, 10 meters to infinity, or 2.8 meters (its closest focus distance) to 10 meters. There are also two variants of autofocus  — one which corrects the lens in two axes, and one which only attempts to catch movement on the vertical axis, allowing you to capture panning shots. There is also a custom mode switch, which can be customized to control things like autofocus speed, optical stabilization and to further control the autofocus limiter.

The Sigma 150-600mm zooms externally, which means the physical length of the lens gets longer when you zoom in. The part that moves is pretty heavy, which could be bad news for astrophotography fans who have their lens pointed upwards, but thankfully Sigma includes a zoom lock switch. This has its limitations — you can’t lock the lens at any focal length, only at the detents marked on the lens, which are 150mm, 180, 200, 250, 300, 400, 500 and 600mm. The switch itself has different strengths, at 150mm it fully locks the lens, preventing it from extending in a bag. At longer focal lengths, it locks the lens but disengages if you grab the zoom ring. When in use, we didn’t have any problems with the lens creeping backward when pointed upwards.

The tripod foot is well-built, and also serves as the mounting point for the included lens strap. The collar and foot can be removed, and Sigma has thoughtfully included a rubber collar that fits over the back of the lens when the tripod mount isn’t attached, to stop the locating screws from getting snagged on things.

Usability-wise we have few complaints, of course, the lens’ center of gravity changes a bit when you zoom in or out, which is something to be aware of if you have a carefully balanced tripod, but overall this is a well-constructed and balanced bit of kit. If we were forced to pick out a niggle it would be the focus ring. It’s very narrow, a shade under 2cm wide, which makes it a little awkward, and it also runs directly underneath the tripod shoe, making it even harder to grab hold of if the lens is mounted straight on a tripod. In fairness, this is a lens for general wildlife and sports applications rather than being dedicated to the kind of fine-manual-focus work that astrophotography entails, but its size, and slightly less-than-perfect smoothness, can be tricky.

Performance from the Sigma 150-600mm f/5-6.3 DG OS HSM is excellent. Get it set up right — see the next section for just how easy that is — and you will reap the rewards. It’s sharp, there are no geometry worries to speak of, and for the money (about $1200), there are very few lenses out there that offer this kind of bang per buck.

We were impressed by its sharpness. At its widest aperture, f/5 at 150mm, there’s very little difference between the center of the frame and the corners. The same goes for chromatic aberration (purple fringing) as well. Straightforward image quality is excellent and pleasingly, little changes as you step through the aperture range.

The only exception to that is vignetting, which is very pronounced at the wider aperture settings. Vignetting might be most apparent in test scenarios – pictures of evenly-lit, plain surfaces — but here we were able to discern plenty of vignetting even in scenes with lots of detail. The problem was at its worst at 150mm and f/5; it reduced significantly when we stopped down to f/7.1, and disappeared more or less completely at f/10 and smaller. Zooming in reduced the problem as well, at 300mm, the smallest aperture (f/5.6) produced a bit of vignetting, and zooming in all the way to 600mm removed the problem almost entirely.

There are, of course, compromises. At 150mm you’ll be working with a comparatively bright aperture of f/5; zoom in to 300mm and the aperture closes down by a third of a stop to f/5.6; zoom all the way in to 600mm and you’ll be working at f/6.3. That means if you’re shooting one second at 150mm, zooming in will see you shooting at 1.7 seconds. You’ll also need the rest of your gear to keep up — detailed, close-up photos of the moon are a snap with this lens, but for actual deep-sky photography you’ll need a lot more specialist gear. An up-rated tripod and star tracker are the bare minimum. We managed sharp results with relatively good consistency at 150mm, but if you’re hoping to use this excellent quality lens for nebulae and stars you should regard it as the first of many (fairly expensive) gear purchases, rather than the purchase that puts you into top-tier astrophotography territory.

If you’re new to astrophotography this lens might not be the one for you. Even with a reasonable mid-market star tracker and a good tripod, going beyond this lens’ widest 150mm focal length proved disastrous for us, leaving us with nothing to show for a blisteringly cold night out other than a pile of blurred images. To be fair, it’s good at 150mm, but at that focal length, you could go for a lens that will be less punishing on your star tracker, see below for alternatives.

And if you’re ambitious? This could be all the lens you ever need. Its very long focal length and comparatively low weight gives it lots of potential for astrophotography, and that’s before you consider its daytime applications. It’s extremely portable, so if the light is reasonable you’ll be able to shoot some really compelling sports and wildlife photography. The vignetting at its wider apertures is a drawback, but not one that can’t be quickly solved with a Lightroom preset.

Our advice? Astrophotographers will probably find lenses that are better for them, even at longer focal lengths. But if you’re looking for a lens for your next safari, or simply something that will out-perform the other parents’ cameraphones at the next sports day, this is a huge amount of lens for a relatively small amount of money.

If this product isn’t for you

So you want to shoot more than wide-field astrophotography but are daunted by the prospect of mounting such a large lens  — or simply don’t want to spend the extra money on replacing your star tracker that can handle something with such impressive reach.

For once, we can’t readily come up with a like-for-like alternative. The Sigma 150-600mm f/5-6.3 DG OS HSM is more or less unparalleled at its price. Tamron makes the 150-600mm f/5-6.3 VC USD G2 (opens in new tab), which offers identical reach and light transmission but costs around $500 more. It’s also 100g heavier, which sounds like splitting hairs but if your star tracker is only capable of taking a lens this size then that added weight could make a difference.

If you want to shoot at mid-telephoto lengths between 70-150mm there are lots of lenses out there that will do a good job. For instance, there’s Canon’s amazing 24-105mm f/4 (opens in new tab), in either its RF or EF-mount variants; or Nikon’s 24-70mm (opens in new tab), again for either Nikon’s DSLR or Z-mount mirrorless cameras.

If you’re in love with Sigma, there are some great options. The 85mm f/1.4 DG DN (opens in new tab) offers plenty of reach, married to a huge aperture that will keep shutter speeds and ISOs down. Or there’s the slightly longer 50-100mm f/1.8 DC HSM (opens in new tab), or the company’s 24-105mm f/4 DG OS HSM (opens in new tab) — all good options that won’t weigh you down as much as this. Equally though, none of those options impresses as much when it comes to sheer focal length grunt — this is truly the king of the budget super-telephoto zooms.

‘Emerging super Crab’ might be the most powerful pulsar ever discovered
On This Day In Space: June 23, 1949: Bell X-1 rocket plane takes 117th Flight