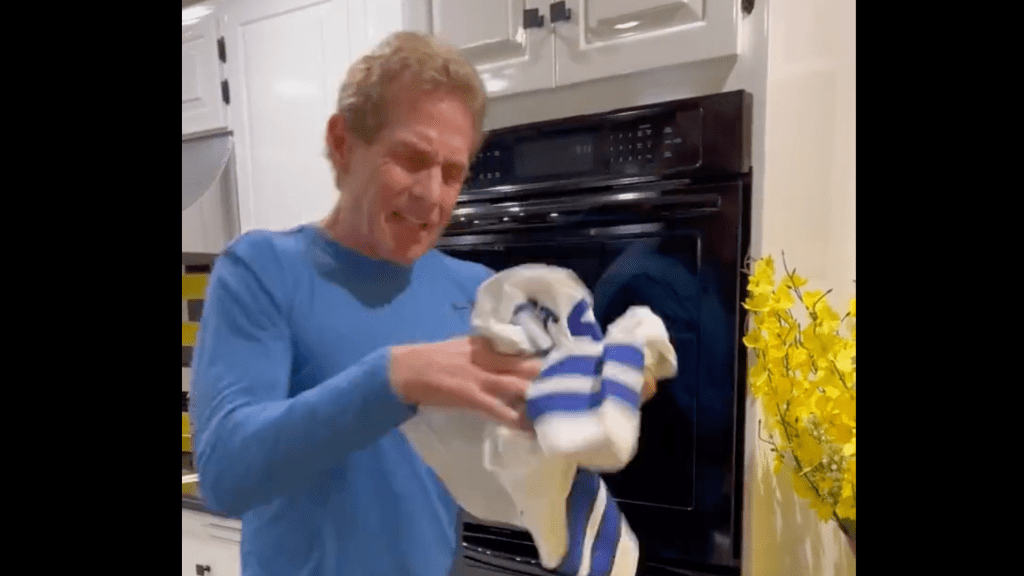 There was once a time when Skip Bayless was considered among the top sports journalists in America. That time is long gone, and Bayless has traded his sportswriting career in for a life of fake debate and performative outrage.

It got especially cringey on Sunday night.

Bayless claims to be a huge Dallas Cowboys fans. Despite the Cowboys failing to reach a conference title game in every season since 1996, Bayless has found ways to buy into the Cowboys. But when Dak Prescott had a dismal showing in Sunday’s NFC divisional round loss to the Niners, Bayless *really* needed to show that he had seen enough of Dak.

He threw Prescott’s jersey in the trash … sort of.

I’m sorry. That’s it. I’ve had it with Dak.pic.twitter.com/1EHRUg8mXe

So, Skip has pulled this staged stunt before. Back in 2019, he threw away (and later retrieved) his Ezekiel Elliott jersey from the garbage. Of course, the whole gesture would carry more meaning if Bayless didn’t remove the bag from the trash can. If he wanted to make a statement and ruin a jersey he already purchased, he should have thrown it away in a trash can with actual garbage in it.

But nothing about Bayless is genuine, so we all know he removed that jersey from the trash can the moment the video stopped.

Fans were not impressed with the tired stunt … or his kitchen.

Skip makes way too much money for that backsplash & the countertop microwave. Overall home decor is lacking. https://t.co/DL0qK5IUqr

I’m trying to imagine the reaction if I asked my wife to film a video of me being performatively angry over a football game to post on Twitter https://t.co/t3tYwWu6Xs

If you believe this man has felt a recognizable emotion since 1999 you basically believe in Santa Claus. Shoes in the house weird also https://t.co/O9TJa42aQ5

Skip waits behind the door before entering the kitchen with a Dak Prescott jersey in hand.

Skip stares at the jersey in anger.

Skip crumples the jersey up and throws it in the trash https://t.co/BGMT53YUkX

It takes a while, but it’s always an honor to work with Mr. @SkipBayless. Here’s the Making Of: https://t.co/WYTkPZIg7V pic.twitter.com/pHap3xZcK9

Would pay a good amount of money to watch him come back around the corner once the camera stopped rolling, reach into the garbage, get the jersey out, make sure there’s nothing on it and hang it back up in his closet. The only walk of shame I’m interested in. https://t.co/kVX09Ex2ck

He isn’t fooling anyone.