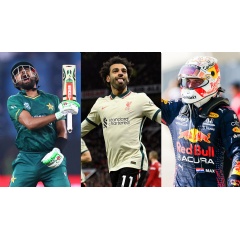 Sky Sports has recorded its highest ever daily viewing figures as the Premier League, Formula One and the ICC Men’s T20 World Cup all contribute to record breaking numbers.

An average of 1.2m viewers tuned into Sky Sports channels throughout the day* on October 24 with a reach of over 8m, delivering a record-breaking day for Sky Sports.

Numbers peaked at 4.5m viewers at 5:50pm headlined by the Premier League match between Manchester United vs Liverpool and the ICC Men’s T20 World Cup match between India vs Pakistan. Another highlight of the day saw customers tune in for the USA Grand Prix in Austin from 8:00pm to see Max Verstappen and Lewis Hamilton continue to fight for the Formula One world title.

It was a bumper day of live sport with a Super Sunday double-header headlined by Manchester United vs Liverpool United and West Ham United vs Tottenham Hotspur on Sky Sports Main Event and Sky Sports Premier League. Sunday’s football offering also included live matches from the Scottish Premiership with St Mirren vs Rangers and Bundesliga with FC Köln vs Bayer Leverkusen as well as a selection of EFL highlights.

Boxing also contributed to the unprecedented audience numbers with coverage of the super-featherweight title fight with Fight Night International between Jamel Herring vs Shakur Stevenson from State Farm Arena in Arizona on Sky Sports Arena.

Sky Sports News covered all the headlines and breaking news through the channel’s rolling editorial coverage.

Sky Sports Managing Director Jonathan Licht said: [i”We’re proud to offer such a variety of exciting live sporting events to millions of households across the UK, delivered by award-winning production teams. For over 30 years Sky Sports has brought viewers together for the unmissable moments only live sport can provide. It’s great to see the appeal of live sport is stronger than ever.” [/i]

Sky is Europe’s leading media and entertainment company and is proud to be part of Comcast Corporation. Across six countries, we connect our 23 million customers to the best entertainment, sports, news, arts and to our own award-winning original content.

Following the launch of Sky Glass, we now offer customers our strongest ever line-up of products and services. As well as the new streaming TV with Sky inside and everything integrated, customers can enjoy the award-winning Sky Q with all your favourite channels and apps in one place, and with Sky Go you can now access an even better experience on your devices. Sky TV has new channels, new shows and new deals with Peacock, Paramount+ and more. Sky Mobile was voted Best Pay Monthly and Best Value Pay Monthly network by Uswitch, and with Sky Broadband we’re offering our fastest speeds yet.

Building on the success of Sky Originals like Chernobyl, Gangs of London and Brassic, we are doubling our investment in original content by 2024 through Sky Studios. Our new TV and movie studio, Sky Studios Elstree, is expected to create over 2,000 new jobs and generate an additional £3 billion of production investment in the UK over the first five years alone. Sky News provides impartial and trustworthy journalism for free, Sky Arts is the UK’s only dedicated free-to-air arts channel making the arts accessible for everyone and Sky Sports, our leading sports broadcasting service, brings customers some of the biggest and best global sporting events from the Premier League to Formula 1 and everything in-between. Sky Cinema is the home of Sky Original films with brand new films launching every month alongside an unrivalled range of the latest cinema releases and on demand library.

We believe that we can be a force for good in the communities in which we operate. We’re committed to being Europe’s first net zero carbon entertainment company by 2030 and we’re proud to be a Principal Partner and Media Partner of COP26 – the UN Climate Change Conference. We take pride in our approach to diversity and inclusion: we’ve been recognised by The Times and Stonewall for our commitment to diversity, and we’ve set ambitious 2025 targets to continue to increase diversity and representation.  We’re also committed to investing £30million across our markets over the next three years to improve our approach to diversity and inclusion, and to tackle racial injustice.