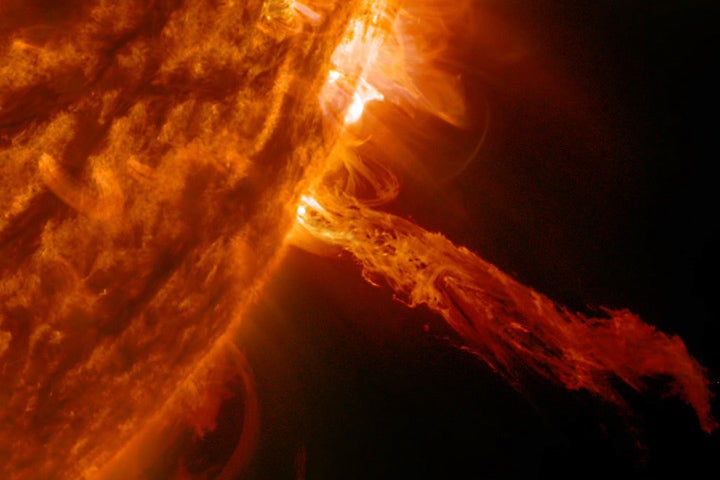 Every now and then, our star produces immense flares of particles and radiation that can wreak havoc on Earth. For more than 150 years, scientists studying these outbursts and how they affect our planet have placed great focus on a single, seemingly pinnacle example: the Carrington Event of 1859. Here, an eruption from the sun walloped Earth, pumping enough energy into our planet’s magnetic field to set off a massive geomagnetic storm that created beautiful auroral displays but also sparked electrical fires in telegraph lines. Our electronic infrastructure at the time was so primitive that the storm was seen as an odd minor inconvenience. But along with another storm of comparable strength in 1921, researchers today recognize the Carrington Event as an ominous warning of future catastrophes. Both storms, however, pale in comparison to an ancient event discovered in 2012: a historic megastorm of humongous proportions that occurred around A.D. 775, which was likely 10 to 100 times stronger. “It was really, really astounding,” says Nicolas Brehm of the Swiss Federal Institute of Technology Zurich. “We didn’t think something of this magnitude could happen.”

The ancient megastorm was so strong that scientists thought it might have come from a once-in-10,000-years “superflare” erupting from the sun, an event that was thousands of times more powerful than a regular solar flare. A direct hit by such a superflare today would likely have devastating consequences for our modern, globally wired society. Fortunately, they are rare events—right?

In a preprint paper led by Brehm, available on Research Square and submitted to Nature Communications, scientists reveal the possible discovery of two frightfully strong solar events. One occurred in 7176 B.C., as nomadic hunter-gatherer societies gave way to agrarian settlements, and the other did so in 5259 B.C., as the planet emerged from the final throes of its latest ice age. Both events are thought to be at least as strong as the one in A.D. 775, making the trio possibly the strongest known solar flares on record. For the past decade, scientists have been on the hunt for additional extreme events like that eighth century one. Brehm’s team is the first to find some. “It’s a great achievement,” says Fusa Miyake of Nagoya University in Japan, who led the study in 2012 that revealed the 775 event. Scientists now refer to such superflares as “Miyake events.”

To look so far back in time, researchers rely on chemical analyses of samples from polar ice caps, as well as from ancient trees preserved in waterlogged bogs or high on mountaintops. When solar particles hit our atmosphere, they can produce unstable radioactive forms of various elements that accumulate in such places. In the case of carbon, the solar activity can form carbon 14, which is absorbed by tree rings as they grow. Because each ring corresponds to a single year of growth, this gives an incredibly precise date of any spikes caused by increased solar activity: the more carbon 14 there is in one, the more solar particles were hitting our atmosphere at a given time. Such rings “allow us to reconstruct patterns of radiocarbon through time,” says Charlotte Pearson of the Laboratory of Tree-Ring Research at the University of Arizona, who is a co-author on the paper. “One of the key things that drives those fluctuations is the activity of the sun.”

Ice cores allow for a similar, albeit slightly less accurate, measurement via their concentrations of beryllium 10 and chlorine 36. Taken together, these methods can provide a very precise account of historical events. We have tree ring data for most of the Holocene—our current geologic epoch, which began about 12,000 years ago. Poring through them for events such as carbon 14 spikes is time-consuming, however. Looking at just a single year typically requires weeks of analyzing and cross-correlating multiple tree-ring samples. “There’s 12,000 years of the Holocene to do, and we’ve done 16 percent of it,” says Alexandra Bayliss, head of scientific dating at Historic England and a co-author on the paper. “It’s a matter of time and money.”

Brehm and his team got somewhat lucky in their study. For the event in 7176 B.C., preliminary evidence for a beryllium 10 spike was first seen in ice cores. The researchers followed up with tree rings and saw a corresponding spike of carbon 14. For the event in 5259 B.C., Bayliss had noticed there was a gap in archaeological data around this time period. Studying carbon 14 data in tree rings from this era, the team found another spike. “We found this huge increase” for both dates, Brehm says, each similar in magnitude to the spikes Miyake found in the samples that clinched the A.D. 775 event.

Following Miyake’s paper in 2012, scientists were at first unsure what was causing these spikes. Some even thought solar events were unlikely. A 2013 study led by Brian Thomas of Washburn University, however, showed solar flares were the probable culprit. “There were people making suggestions [that the 775 spike] could be from a supernova or even a gamma-ray burst,” says Thomas, who was not involved in the latest paper by Brehm and his colleagues. “But they’re just too rare to cause this kind of frequency. It doesn’t fit as well as the solar explanation.” Such large, frequent spikes, he argues, were more likely the result of increased solar activity—possibly accompanied by a geomagnetic storm similar to the Carrington Event but far more powerful. “The Carrington Event isn’t even detectable” in tree rings and ice cores, Bayliss notes, which suggests it was minuscule by comparison.

If that link is correct, it suggests that in the past 10,000 years alone, Earth has been battered by at least three solar superflares. (Evidence of more may eventually be found in the four fifths of available tree-ring data that has yet to be analyzed for carbon 14 spikes.) “For there only to be one in the last 10,000 years didn’t really seem realistic,” Pearson says. “But up until this point, it could have just been a one-off. Now that we’ve found two more, I’m not sure that it’s surprising—but it may be concerning.”

The major worry is that if such an event happened today, it could be devastating to satellites in orbit and infrastructure on the ground. In March 1989 a geomagnetic storm caused a 12-hour blackout in Quebec when it overloaded the entire province’s power grid despite the fact that it was much weaker than even the Carrington Event. Today a geomagnetic storm resulting from a Miyake event would likely see much more widespread effects, including potentially catastrophic power grid and satellite failures.

Sangeetha Abdu Jyothi of the University of California, Irvine, recently calculated that a Carrington Event–level storm today could cause an “Internet apocalypse.” Energetic particles from such a storm could knock out undersea cables between countries, disrupting worldwide Internet traffic for weeks or even months. In the U.S. alone, such a disaster could cost $7 billion per day, Abdu Jyothi estimates. Something stronger, such as a Miyake event, could cause damages so great that they would be almost incalculable. “For something at a Carrington-scale, we could possibly recover, because our data itself will not be erased,” Abdu Jyothi says. “With something 10 or 100 times stronger, I don’t know. I don’t think anybody has simulated that. I suspect it would cause significant data loss. We could lose all our records, bank information, and critical health information and not have anything to go back to.”

The chance that our global civilization shall suffer a new dark age from a Miyake event seems remote for the time being. But some estimates suggest the odds of a Carrington-level event may be as much as 12 percent in the next decade. We can prepare for something of this level by monitoring solar activity and shutting down satellites and power grids ahead of the arrival of a superflare and its ensuing geomagnetic storm. But something much stronger, a Miyake event, may be more difficult to protect against. As we continue to find evidence of additional extreme events in ancient tree rings and ice cores, the prospect that one might occur in the near future should not be discounted. “We’re just starting to realize that the sun can be a whole lot more energetic and active than we thought,” Thomas says. “When people were studying these superflares on other stars, one of the discussions was whether the sun could do this. From these historical records, it seems the sun is capable of getting into that range. There’s quite a lot of reason for concern.”