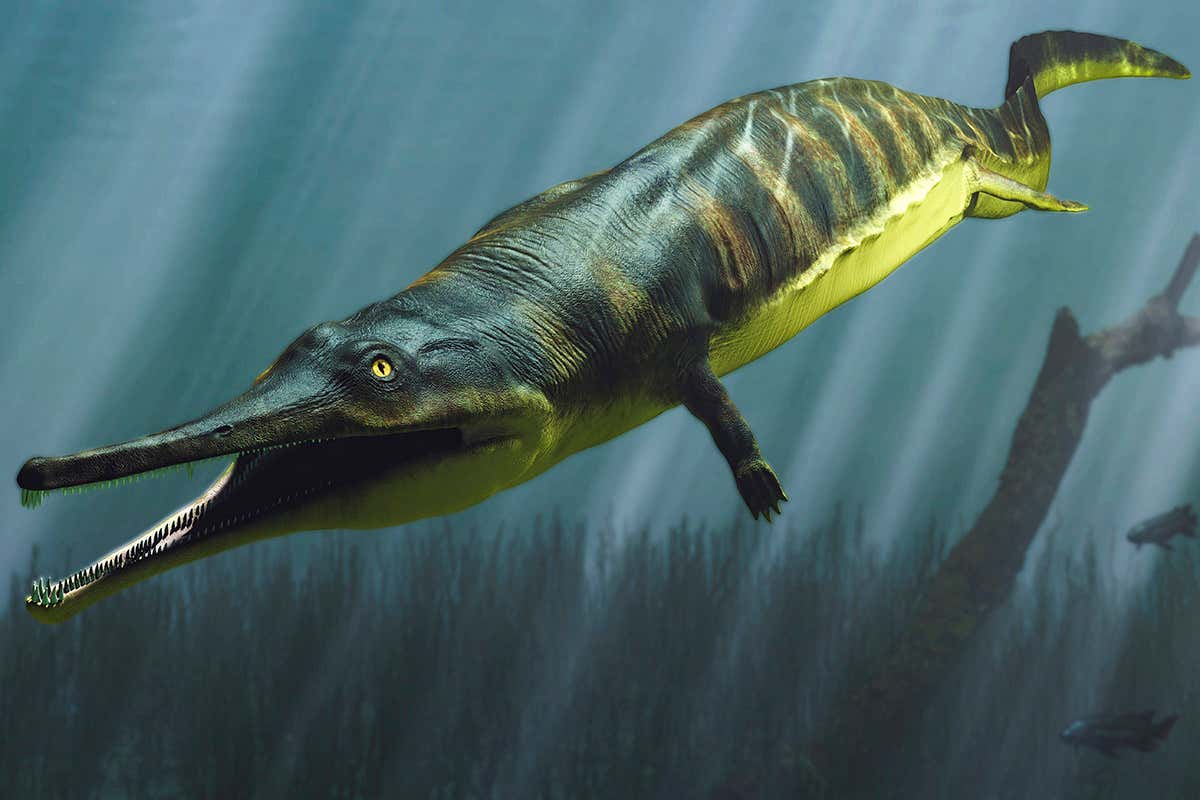 One of the greatest transitions in evolutionary history was the emergence of tetrapods, or four-legged vertebrates, onto land. By about 340 million years ago, fins had become fingers and limbs, shoulder and hip joints had changed to bear weight, and an array of amphibious creatures had begun to live along the water’s edge. But an analysis of some early tetrapods now suggests that not long after they made a home on land, some species became adapted to life in the water all over again.

Aja Mia Carter at the University of Pennsylvania and her colleagues focused on a group of early amphibians called temnospondyls, roughly salamander-like tetrapods that spun off a great diversity of species between 295 and 330 million years ago.

Rather than looking at the limbs of these animals, though, Carter and her team analysed the backbone anatomy of over a dozen temnospondyl species. They also used a previously published evolutionary tree to understand how these species were interrelated, and searched the scientific literature for information on the likely lifestyles of each – in particular whether it was either more aquatic or terrestrial.

Temnospondyls, the researchers found, most likely evolved from a land-dwelling ancestor. Surprisingly, from there, some species changed course and became adapted to life in water all over again in an evolutionary reversal.

The analysis also revealed that relatively stiff backbones weren’t an adaptation to life on land. Researchers have typically assumed that early land animals evolved a stiffer spine to help support their bodies, but it was actually the water-dwelling temnospondyls that had a more rigid spine.

“I was stunned to see that between individual vertebrae, aquatic species were stiffer than terrestrial species,” says Carter. In other words, a stiffened spine wasn’t essential for these early amphibians to walk on land.

“This research is resetting how we think about locomotion in [early] amphibians,” says Julia McHugh at the Museums of Western Colorado.

The study suggests temnospondyl backbone anatomy is a good predictor of the complicated evolutionary history of these early four-legged animals. It can help establish whether a species lived on land, but had an aquatic ancestor, or lived in water, but had a land-based ancestor.

“This study is the best of modern science,” McHugh says, putting longstanding ideas to the test.

Sign up to Wild Wild Life, a free monthly newsletter celebrating the diversity and science of animals, plants and Earth’s other weird and wonderful inhabitants