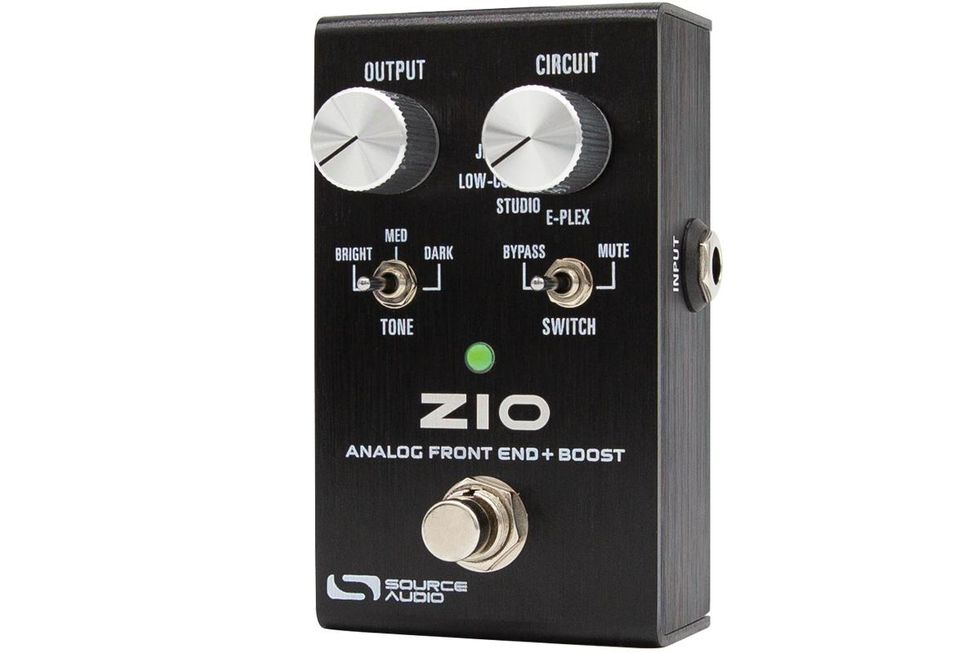 Source Audio nicknamed the new ZIO pedal “the Better Box,” which is a fair summation of what this thing will do for your tone. Purists may rant endlessly about the virtues of plugging straight into an amp. But many legendary players understood that a little extra “hot” between guitar and amp can add up to magic. From Jimmy Page’s Echoplex preamp to Brian May’s Rangemaster to Angus Young’s Schaffer-Vega wireless system, a lot of signature sounds have been shaped with a little extra kick—and often from unexpected sources that are something other than simple boosts. Source Audio’s first all-analog pedal is more than a conventional booster, too. And, to some degree, it celebrates these alternate paths to boosting tone.

Designed in collaboration with Christopher Ventner of SHOE Pedals, ZIO is short for Impedance (“Z” in electro-speak), Input, and Output, which hints at the front-to-back thinking behind the design. The pedal’s input impedance is calculated to optimize the signal from a traditional high-impedance guitar pickup and send it down the line as a sweetened low-impedance version of itself. In doing so, ZIO helps your signal survive long chains of pedals and cable runs. Four selectable modes each offer up to +20 dB of gain and three levels of cable-mimicking capacitance to subtly brighten or darken your tone as desired.

All recordings using a Novo Serus J guitar set to the bridge pickup (an Amalfitano P-90), into a Friedman Mini Dirty Shirley set to clean and 1×12 cab. Zio pedal set at 50% output, Tone on Bright.

Though its methods for tone shaping might seem slightly esoteric on the surface, ZIO is easy to use. The knobs are a single control for output level and a 4-position rotary switch, dubbed circuit, which selects the preamp voicing. The JFET mode uses Burr-Brown op amps to generate a transparent, low-distortion boost, mimicking the response of a clean tube amp input. Low-cut mode reduces frequencies that can cause mud and rumble, lending more presence. Studio mode successfully replicates the effect of using a Pultec compressor to cut muddy lower-mids and enhance presence. The E-Plex mode, meanwhile, replicates the rich, clear, and just slightly colored sound of a vintage Echoplex preamp.

Source Audio is mindful of the fact that a long cable’s capacitance is an essential part of some players’ overall sonic brew, and that a booster/line-driver in front of the chain can negate the capacitance effect. So ZIO includes a tone toggle that offers three levels of cable-capacitance emulation. Bright represents a low-capacitance load and the brightest tone—as you might hear from a very short, high-quality cable. Med approximates a 15-foot cable and softens highs just a bit. Dark achieves the mellowing effect of longer or coiled cables.

A 2-position mini-toggle to the right is specifically tailored for players that will keep ZIO on at all times and allows the user to configure the footswitch as a mute function in place of the traditional off setting. That means one of the two outputs on the left side of the pedal can feed a tuner running independent of the signal chain or deliver a line-level signal to any amp, console, interface, or input that you want to keep live while muting the main output. Nine-volt DC power feeds the ZIO, with a center-negative input on the crown. It’s all housed in a rugged brushed-aluminum enclosure that’s not quite mini-pedal small but compact at 4″ x 2.3″ x 2.2″ tall (including the knobs).

I fast fell I love with ZIO’s variety of boost tones and easy integration into my pedalboard.

I fast fell in love with ZIO’s variety of boost tones and easy integration into my pedalboard. It flat-out sounds fantastic. Some players will no doubt consider ZIO pricey for a booster pedal with a few extra bells and whistles. But the enhanced tones will be well worth it for many guitarists, even if they only ever use one circuit mode.

That said, switching between the circuits is half the fun. And at times I fantasized about a rig based on two ZIO pedals: One that I could use as a transparent always-on line driver and tone juicer, and another as a proper boost. Used in the latter application, ZIO made my tweed-style combo bite and break up a lot more readily. It was also secret sauce for a Friedman Mini Dirty Shirley, making its Plexi-style crunch and lead tones extra delectable. While all four preamp-emulating modes proved effective—and I could certainly find many useful applications for each—I really fell for the Pultec-inspired studio mode. It’s sweet, juicy, clear, and articulate, and it simply makes everything more luscious. It can also offer a playful dose of extra drive when you crank the output past 11 o’clock. It sounds fantastic as an amp-input driver in this setting. The tone switch settings are pretty subtle, but that’s the idea: You use it to fine tune the feel and character of the signal once you’ve dialed in the other functions to near-perfection.

Boosts are often one-trick ponies. But Source Audio and Christopher Ventner’s sly and very smart selection of features make ZIO a whale of a tone enhancing machine—and a sneakily versatile one at that. Yes, the ZIO is a simple device in principle, but it does what it does exceptionally well. And while many players will regard the tone switch and switch modes as minor bonus features, I suspect they will prove invaluable to many exacting tone crafters and super-functional in some rigs. For me, at least, they help make ZIO one of the tastiest boost pedals I’ve tried in quite some time.