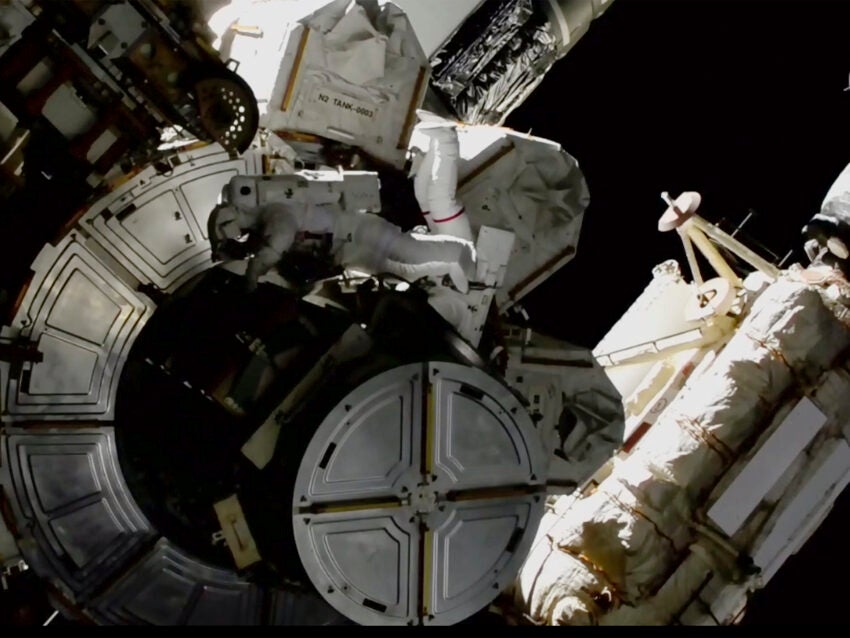 The hose work should have been completed during a spacewalk outside the International Space Station a week ago, but was put off when power upgrades took longer than expected.

Eager to get the station improvements done before the astronauts head home this spring, Mission Control ordered up the bonus spacewalk for Victor Glover and Mike Hopkins. They teamed up for back-to-back spacewalks 1 1/2 months ago and were happy to chalk up another.

“You guys have fun out there and be safe,” Mission Control radioed as the spacewalk finally got underway, almost an hour late.

Before going out, the astronauts had to replace the communication caps beneath their helmets in order to hear properly. “I’ve got you loud and clear,” Hopkins said once the new cap was on his head.

Glover and Hopkins — who launched last November on SpaceX — had to vent a pair of ammonia jumper cables that were added years ago following a leak in the space station’s external cooling system.

NASA cautioned the astronauts to use “extra vigilance” to prevent ammonia from getting on their spacesuits and tracking it back inside. The spacewalkers had long tools to vent the hoses and were advised to stay clear of the nozzles.

Glover and Hopkins had to move one of the hoses to a more central location near the NASA hatch, in case it’s needed on the opposite end of the station.

It was the fifth spacewalk — and, barring an emergency, the last — for this U.S.-Russian-Japanese crew of seven.