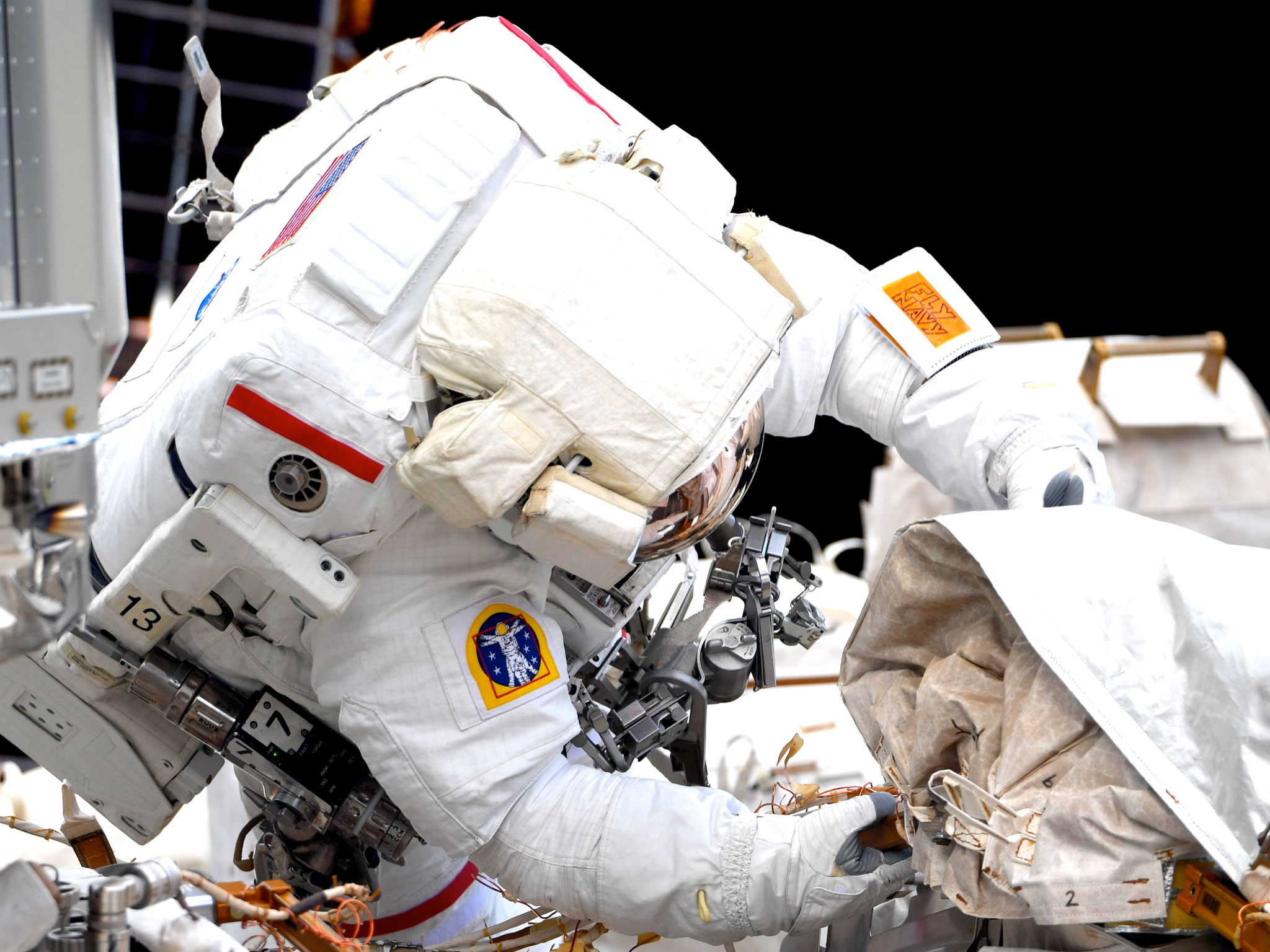 Two astronauts tackled a list of leftover maintenance tasks outside of the International Space Station Saturday (March 13), completing work that was originally scheduled to be done on previous spacewalks.

Expedition 64 crewmates Victor “Ike” Glover and Mike “Hopper” Hopkins, both with NASA, ventured out of the space station’s Quest airlock on Sunday (March 13) for the 6 hour and 47 minute extravehicular activity (EVA). The spacewalk, which began at 8:14 a.m. EST (1314 GMT), marked their third outing together since arriving at the station in November on SpaceX’s Dragon spacecraft “Resilience.”

The two astronauts’ first task, postponed from a spacewalk earlier this month, was to vent the remaining ammonia from two jumper cables that were used to feed coolant into the station’s thermal control system. Working at the far left end of the orbiting complex’s backbone truss, Glover and Hopkins released the ammonia from the pair of hoses and then stowed one jumper in place and relocated the other to the side of the airlock should they are needed to help find coolant leaks in the future.

“I see venting,” said Hopkins after releasing the ammonia from the first jumper. “Oh yeah, look at that go!”

“That is more than I thought,” he said a few moments later as coolant continued to spray into space.

Because ammonia is toxic, the two spacewalkers paused to inspect each other’s spacesuits to make sure no ammonia ice crystals were attached.

“I can see the top of your helmet, your lights, the PLSS [portable life support system], your shoulders, your arms — I see nothing that is stuck,” reported Glover about Hopkins’ spacesuit. “It looks clean.”

After stowing the jumpers and cleaning up the tools they used to vent the ammonia, Glover and Hopkins split ways to continue separate tasks outside the space station.

Glover, who was designated extravehicular crew member 1 (EV1) and wore a spacesuit with red stripes for identification, headed off to the Unity node to replace a failed wireless camera transceiver with a new one.

Meanwhile, Hopkins, wearing a spacesuit with no stripes as EV2, transitioned over to the ESA (European Space Agency) Columbus laboratory, where he worked to run electrical cables to the module’s Bartolomeo external experiment platform. Glover and Hopkins had installed the same rigging during a Jan. 27 spacewalk, but ran into issues connecting some of the cables, preventing the platform from becoming fully operational.

“Mated!” exclaimed Hopkins after successfully connecting the first of the troublesome connectors. “And the crowd goes wild!”

In pictures: The most memorable spacewalks in history

As Hopkins continued working on the second and third of four Bartolomeo cables, Glover completed the wireless transceiver replacement and moved on to installing a “stiffener” on the Quest airlock’s thermal cover to provide added structural integrity and to prevent the cloth hatch from being jostled open when not in use.

“Hopper, there’s something in my right eye,” Glover radioed to Hopkins. “I can see, but it is irritating trying to keep it open.”

Glover continued working on the hatch stiffener, but described the issue with his eye in more detail to Mission Control.

“It’s irritated if I keep it open. If I close it, I am fine, slightly irritated and it’s watery. So tears, it is creating tears,” said Glover, adding that blinking seemed to help.

A few minutes later, Glover said his right eye was back to normal.

Hopkins, meanwhile, had no joy with latching down the fourth connector on the Bartolomeo platform. Despite his best efforts, including using a tether as a makeshift handle to pull down on its locking mechanism, Hopkins could not get the cable to seat and Mission Control advised he stand down.

Instead, Hopkins moved on to reconfigure a ham radio antenna on the Columbus module. Astronauts use ham radio to connect with enthusiasts and students around the globe as both an educational and public outreach tool.

As their final task for the spacewalk, Glover and Hopkins came together to begin routing two ethernet cables for high-definition cameras on the port truss.

The spacewalk came to an end at 3:01 p.m. EST (2001 GMT) with the repressurization of the Quest airlock.

Glover has now spent a total of 26 hours and 7 minutes on four spacewalks. Hopkins has now logged 32 hours and 1 minute on his five EVAs. This was the 237th spacewalk in support of the assembly and maintenance of the International Space Station, for a total time of 62 days, 3 hours, and 54 minutes.