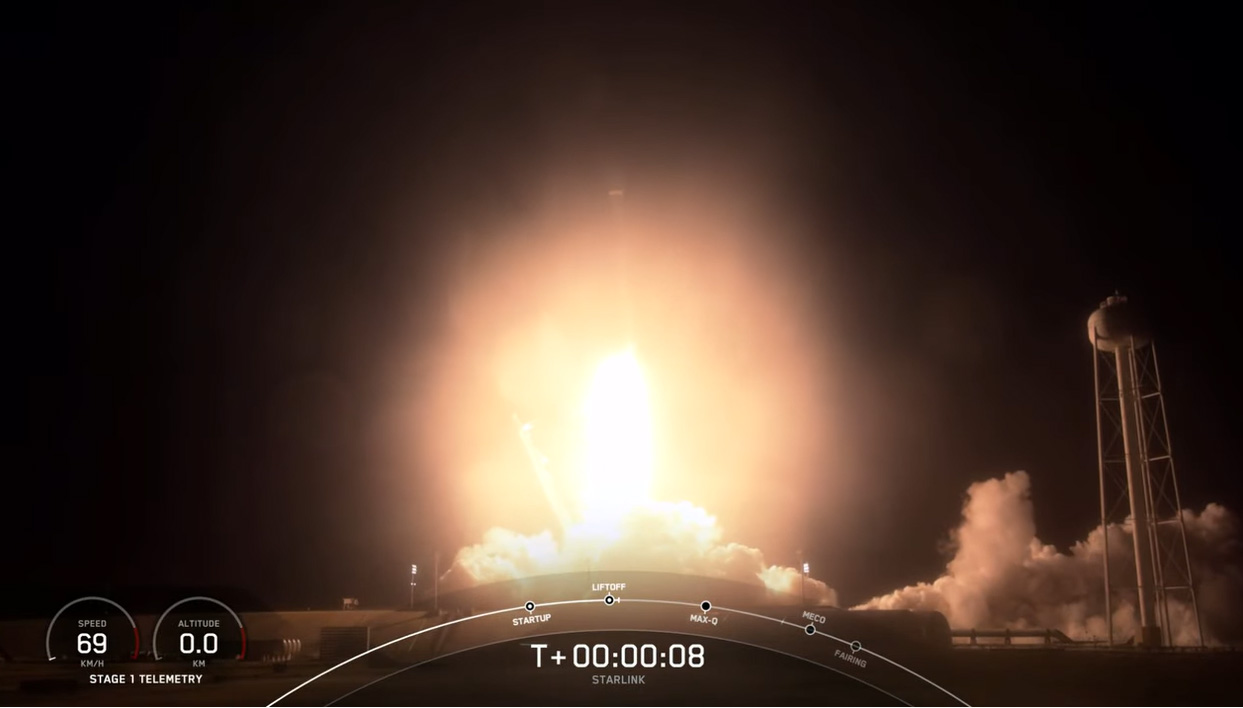 CAPE CANAVERAL, Fla. — A SpaceX Falcon 9 rocket launched a new batch of 60 Starlink internet satellites into orbit early Sunday (March 14) and nailed its landing at sea to top off a record-setting mission.

The veteran Falcon 9 rocket is the first in SpaceX’s fleet to launch and land a record nine times. The two-stage launcher blasted off from Pad 39A at NASA’s Kennedy Space Center here in Florida at 6:01 a.m. EDT (1101 GMT).

Approximately nine minutes later, the reusable rocket’s first stage returned to Earth to attempt its ninth landing on SpaceX’s drone ship “Of Course I Still Love You” stationed out in the Atlantic Ocean.

The flight comes just days after the company’s last launch, where a different Falcon 9 rocket took off from neighboring Space Launch Complex 40, at Cape Canaveral Space Force Station. Both missions delivered a full stack of 60 Starlink satellites to orbit, helping SpaceX inch ever-closer to filling its initial constellation of 1,440 satellites.

It was a crystal clear night in Florida as the Falcon’s flames lit up the night sky. Weather forecasters at the 45th Weather Squadron predicted ideal conditions for launch, with the only weather concerns being the potential for cumulus clouds.

There wasn’t a cloud in the sky, as onlookers were treated to an incredible view of the rocket climbing to orbit.

The pre-dawn sky makes for some trippy atmospheric effects and this launch did not disappoint. Below the horizon, the sun illuminated the rocket’s plume creating a dazzling space jellyfish in the sky. This type of phenomenon only occurs at dawn and dusk.

These launches are often confused for UFOs because of the weird squiggly clouds produced. (Spoiler alert: It’s definitely not aliens.)

Related: What’s that in the sky? It’s a SpaceX rocket, but it sure doesn’t look like it

The booster, B1051, is one of two in SpaceX’s stable of reusable rockets that has more than seven flights under its belt. The veteran flier first flew in March of 2019, lofting an uncrewed Crew Dragon spacecraft to the International Space Station (ISS) as part of a demonstration mission.

Following that first mission, B1051 traveled cross-country to launch a trio of Earth-observing satellites for Canada from SpaceX’s facilities at Vandenberg Air Force Base in California. The booster then flew a total of five times from Florida in 2020, carrying five different Starlink missions and a broadband satellite for Sirius XM.

Sunday’s mission marks the eighth flight overall for SpaceX in 2021, and the second flight this year for this particular booster. After its last flight took off on Jan. 20, SpaceX engineers were able to turn it around the booster and prep for a historic ninth flight in just 53 days — the second quickest turnaround time for this particular booster. (The record was between flights 7 and 8, which took off just 38 days apart.)

B1051’s counterpart, B1049, has flown eight times, with its most recent flight blasting off on March 4, following several delays due to weather and the need for more prelaunch checkouts. SpaceX designed its Falcon 9 rocket to fly as many as 10 times with little-to-no refurbishments needed in between flights. As these two boosters approach that 10-flight milestone, the company is closely monitoring the wear and tear each receives during flight.

Having a fleet of flight-proven rockets at its disposal, allows SpaceX to keep up with its rapid launch cadence. However company officials have stressed that while booster recovery is a bonus, the main objective is to deliver whatever payload the rocket is carrying to space.

Each recovery attempt and subsequent post-flight inspection process teaches SpaceX more and more about how much wear and tear occurs after a launch. The company uses that information to improve and streamline its recovery process.

When its upgraded version of Falcon 9 debuted in 2018, the company said that it expected each Falcon 9 first stage could fly an estimated 10 times with little-to-no refurbishments in between, and as many as 100 times before retirement.

Now, the company says that the number 10 may be more of a guideline than a hard limit. With B1051 set to make its ninth flight, it’s entirely possible we will see at least one, if not multiple boosters reach that 10-flight milestone.

On Thursday (March 4), SpaceX’s other fleet leader, B1049, took off on its 8th flight. The booster is back in port, waiting for transport to SpaceX’s facilities for post-flight inspections and will be prepped to fly again.

SpaceX recently lost one of its boosters in February, after it failed to land on the drone ship. The mishap ended a 24-booster recovery streak the company set in 2020, after losing two other boosters in back-to-back mishaps.

The loss was attributed to an engine shutdown during flight, which prevented the vehicle from nailing its intended landing spot. SpaceX said that shutdown occurred after hot gas leaked into parts of the engine it wasn’t supposed to.

Falcon 9 is designed to complete its mission even if one of its engines shut down during flight. However, engineers are hopeful that potential software updates will be able to help the vehicle land if such an anomaly occurs.

With tonight’s launch success, SpaceX has launched more than 1,300 Starlink satellites into orbit, which includes some that are no longer operational. And there are many more launches coming as SpaceX’s initial Starlink constellation will consist of 1,440 satellites. However, the company has sought approval for tens of thousands more.

The company launched its massive constellation, with one major goal: to connect the globe. To that end, SpaceX designed a fleet of flat paneled broadband satellites that will fly over the Earth, providing users across the globe with internet coverage. In particular those in rural and remote areas who otherwise would not have connectivity.

SpaceX previously announced that it gave 40 families in Wise County, Virginia user terminal to access its Starlink internet service. The company has expanded that to two different counties in North Carolina — Swain County in the state’s west and Hide County on the east coast.

Residents in both of these counties are unable to connect to traditional internet services based on the geography of their respective locations. Neither county has broadband infrastructure or reliable cell service, so attending school during the pandemic has been a challenge. During the launch broadcast, SpaceX revealed that it would be helping students in these areas with broadband service.

Currently Starlink is still in beta-testing as SpaceX works to fill out its initial constellation. Users in the U.S., Canada, the United Kingdom, Germany and now New Zealand can access the service. SpaceX is taking preorders for when it rolls out full commercial services sometime later this year.

GO Ms. Tree and GO Ms. Chief, SpaceX’s two net-equipped boats are sidelined for this mission. In their place, SpaceX has deployed two of its Dragon chasers: GO Searcher and GO Navigator.

The pair are typically deployed to fetch Dragon capsules out of the water, but do serve as backup to the fairing catcher twins, and have been the main means of fairing recovery for the past few missions.

Both fairing pieces on this mission previously flew on the Transporter-1 mission in January, and with any luck, they’ll fly again soon. The success of any recovery attempts are typically announced about 45 minutes after liftoff.