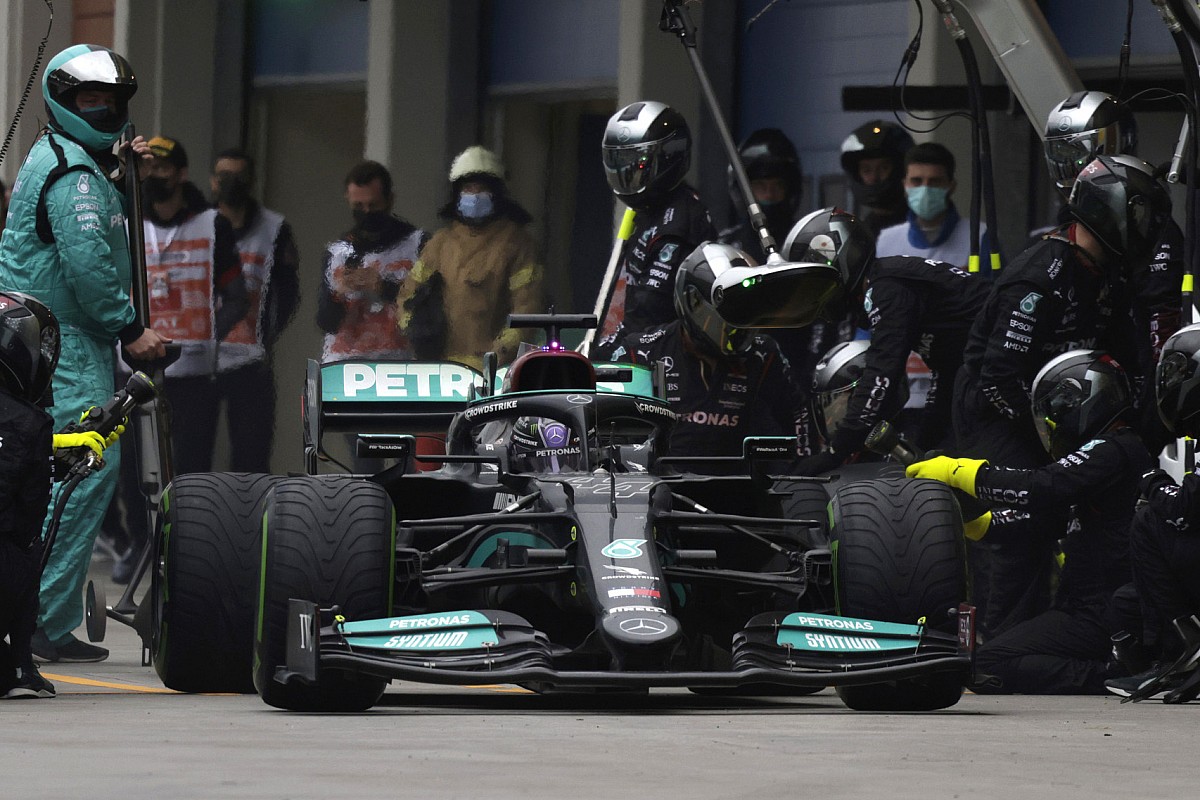 Hamilton was left frustrated after Mercedes opted to pit him with eight laps remaining at Istanbul Park, dropping him from third back to fifth place after starting 11th on the grid due to a penalty.

Hamilton had hoped to complete the whole race on a single set of intermediate tyres after not pitting when the immediate cars near him did with around 20 laps remaining.

Mercedes explained after the race that it wanted to cut its losses by bringing Hamilton in when it did, fearing he would have suffered significant degradation in the closing stages.

Alpine’s Esteban Ocon was the only driver to go the whole race without pitting, but lost 18 seconds to Lance Stroll in the final five laps, and was fortunate to cling on to a point.

Mercedes trackside engineering director Andrew Shovlin said the team’s calculations suggested Hamilton could have finished fourth without pitting – but only if he suffered no more degradation, which was unlikely.

“If they stabilised at the point that we brought him in, and they remained completely consistent there to the finish, we think he would have lost the place to Sergio [Perez], but he would have stayed ahead of Charles [Leclerc] who finished P4,” Shovlin said during the latest episode of This Week with Will Buxton on Motorsport TV.

“But that scenario is to say there is no more degradation, and it’s quite clear the tyres were dropping.

“If we super-impose that degradation onto Lewis, then you could see that he’d actually be losing numerous places, almost dropping to the back of the points. On the basis of that degradation, he could even have been in a fight with [Carlos] Sainz at the very end.

“That’s a calculation you can’t do live, because you’re relying on information in the future.”

Hamilton was brought into the pits to ensure that he returned to the track in fifth place, with Mercedes fearing he would have lost a place to Pierre Gasly and fallen to sixth had he stayed out any longer.

Shovlin explained that with the best-case scenario suggesting he would lose the podium anyway, the team thought it best to “cut our losses”.

“It becomes a bit of a gambler’s dilemma where you know you haven’t done the optimum thing already by that point, but how do you make the best of the remainder of the race?” Shovlin said. “It was looking increasingly like stopping for another set, even if you’ve got to go through the graining, was going to be the best placed finish and the safest thing to do.”

Mercedes initially gave Hamilton the call to pit soon after seeing Perez come in, only for the seven-time world champion to ask that he stay out.

Shovlin said the Mercedes pitwall was “all on board” to stay out longer and “take some risks”, trusting Hamilton’s decision in the tricky conditions.

“The driver is one of the best-placed out there to know what the tyres feel like, to know what the grip’s like,” Shovlin said. “They’ve got this feeling through all their many, many years of experience, of how far they can take those, which is why we are listening to what Lewis is saying through a lot of these periods.