Stephanie Frappart: When might a woman referee a Premier League game?

Home /Sports/Stephanie Frappart: When might a woman referee a Premier League game? 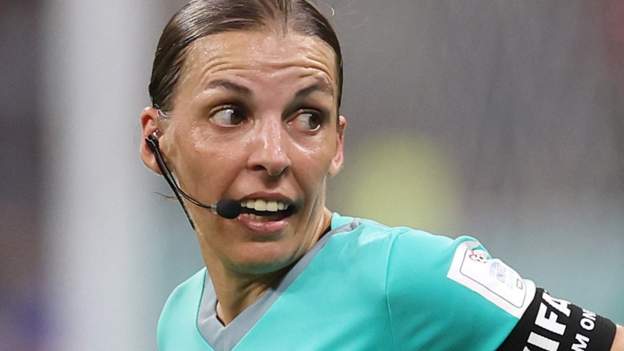 Stephanie Frappart became the first woman to referee a men’s World Cup game as she oversaw Germany’s 4-2 win over Costa Rica on Thursday.

The Premier League is still waiting for a similar milestone, so when might a woman take charge of a top-flight men’s game in England?

The answer is soon, according to Bibiana Steinhaus-Webb, who broke the same ground in the Bundesliga and is now in charge of England’s elite female officiating talent.

“I am absolutely certain we will see a female referee in the Premier League at some point, short down the road,” she told BBC Sport.

“The quality coming through female officials is absolutely mind-blowing.”

Wendy Toms was the first female assistant referee in the Premier League in 1997, but only two women have followed since, with Natalie Aspinall joining Sian Massey-Ellis on the top flight’s list of assistant referees for this season.

Steinhaus-Webb, who became the first woman to referee a German top-flight men’s game in September 2017, now oversees the development of female officials for the Professional Game Match Officials Limited (PGMOL) in England.

She says that Frappart’s display and that of other female officials in Qatar – another two female referees and three assistant referees are also available for selection – is crucial for paving the way for a new generation.

Steinhaus-Webb believes the English game has several prospects with the potential to step up to a bigger stage.

“They are recognised for their excellent performances on the field of play.

“I have never seen a group of officials being that professional, that organised, that detailed in their preparation, on their fitness targets, nutrition.

“The professional behaviour we can see now in the whole environment, it is absolutely overwhelming.”

Janie Frampton was one of the first female referees in the men’s professional game in England and went on to instruct referees for Fifa for a decade.

She said that Frappart’s selection as a referee, rather than on the sidelines, is key.

“My only concern was were they were going to take the girls and then only use them the fourth official? So this is an absolutely a fantastic moment.”

Asked how long it would be before a woman took charge of a Premier League game, she said “maybe five years”.

But like Steinhaus-Webb, she is keen to make sure any promotion is for the right reasons.

“I don’t want women to be promoted to the middle of the Premier League just so we can tick a box. They have to be good enough, but we have got girls coming through now who are possibly good enough.”

There are more than 50 female officials across the Premier League, Championship, Women’s Super League and Women’s Championship.

Welch was one of 12 referees at the Women’s Euro 2022, with Massey-Ellis and Rashid among the assistants.

But Frampton believes too many female officials are lost to the top of the game because of problems at grassroots level.

“We’ve done much better, of course we have, but we still have a big gap of women coming through, and that’s for lots of different reasons,” she added.

“We’ve got to make sure that women see this as an environment that is welcoming to them.

“We’ve got to try and cut away some of the non-conscious bias that is still out there.”