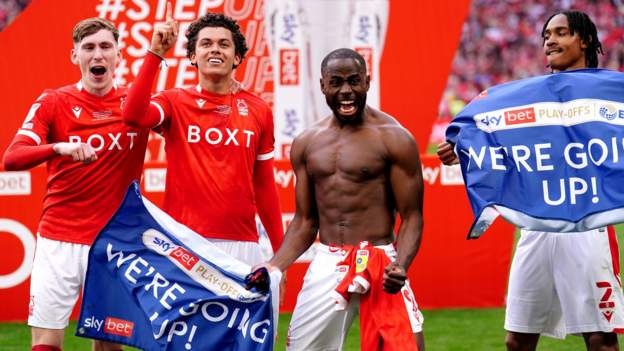 Boss Steve Cooper said Nottingham Forest “belong in the Premier League” after leading them back to the top flight for the first time in 23 years.

“We are a a big football club, we know that it’s full of history and tradition. We stand on that, proud,” Cooper told BBC Radio Nottingham.

“I’ve always said ‘let’s try to create a next positive chapter’ and we have managed to do that.

“For everyone connected to the football club this is a day to be proud of. They deserve to be back in the Premier League where they belong.”

Forest became the first European Cup winners to drop to the third division of a domestic league when they were relegated to League One in 2005.

It was a low point for a club known for having gone from the old Second Division in 1977 to claim the English title 12 months later, before going on to win back-to-back European Cups under the late, great Brian Clough.

The long-awaited return to the top flight came in their first appearance at Wembley for 30 years and at the end of one truly remarkable season, in which they spent 46 of the first 52 days of the campaign in the relegation places.

Under former boss Chris Hughton, Forest picked up one point from seven games as they made their worst start to a season for 108 years.

‘Hard to get off the canvas’

When Cooper came in after eight games, they had picked up their first win of the campaign but were still bottom of the table.

No team in the second tier picked up more points than the Reds after that, as an exciting, attacking brand of football under the Welsh tactician catapulted them up the table and into the play-off spots.

“When you are at the very bottom, it is hard to get off the canvas to do what we have done,” Cooper said.

“We deserve to be promoted, there is no doubt about that.”

Forest’s Nottingham-born captain Joe Worrall said he felt “on top of the world” after leading his hometown club back to the Premier League.

“It’s been a tough football club at times, and all that has been repaid today, Forest are back in the Premier League,” he said. “I can’t believe I’m saying those words, but we’re over the moon.

“I’m looking forward to testing myself and being on Match of the Day.”