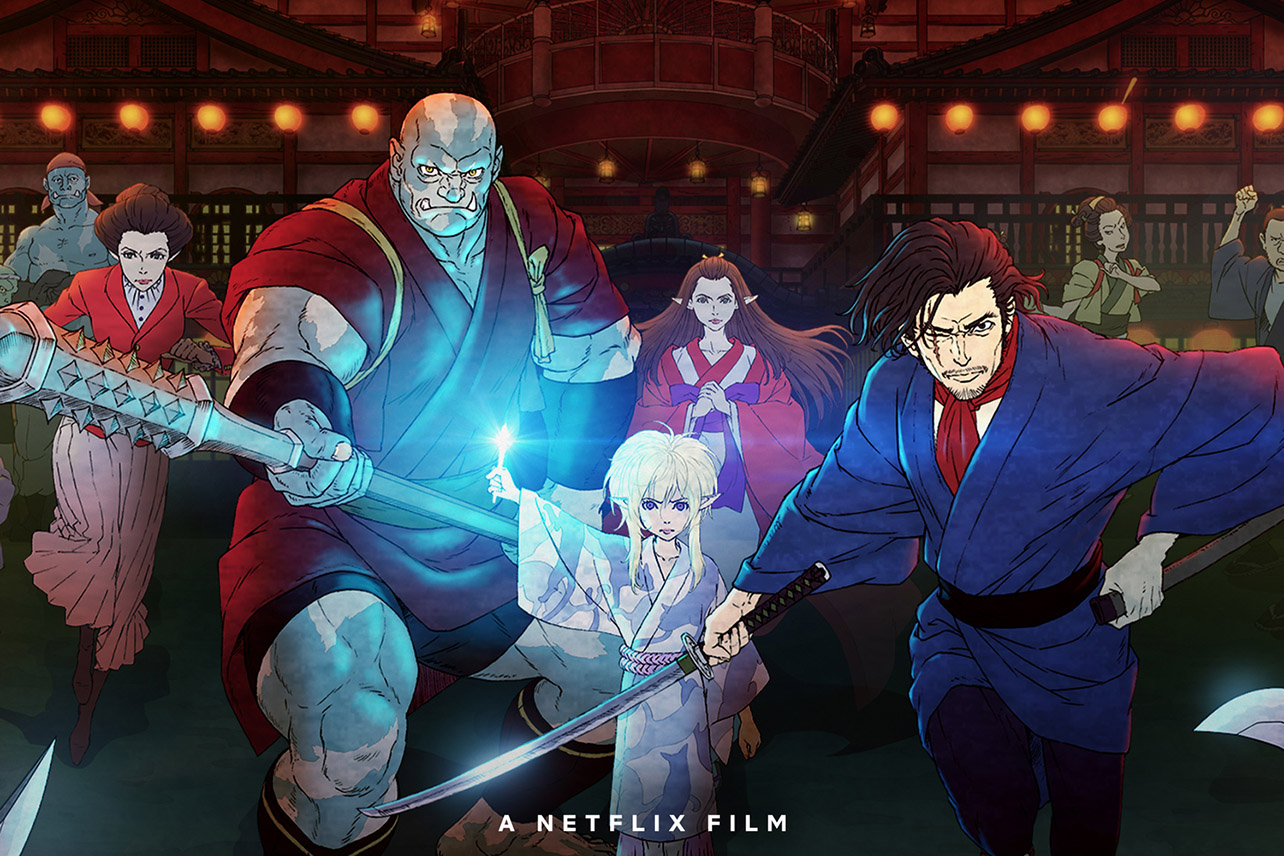 Four years have passed since Bright was a Netflix smash — for audiences, anyway, who streamed it in then-record numbers, while critics viciously curbstomped it. Some of those critics might feel a shiver up the spine with the mere mention of a Bright Cinematic Universe: A sequel is in the works, and anime spinoff Bright: Samurai Soul is now streaming. Samurai Soul marks a departure into action for director Kyohei Ishiguro, whose most notable projects, the film Words Bubble Up Like Soda Pop and series Your Lie in April, are relatively gentle. The anime film takes the original fantasy concept — orcs and elves and such live among humans on Earth, where magic exists — and drops it into 19th-century Japan. Now let’s see if it works.

BRIGHT: SAMURAI SOUL: STREAM IT OR SKIP IT?

The Gist: TOO MANY TITLE CARDS: Hope you can read fast! It’s mid-19th-century Japan. Once upon a time, a big battle was stopped right in its tracks when a huge column of blue-white light-energy shot into the sky. A few years hence, they say everything’s changed, not that we can tell? We meet some characters in a high-end Kyoto brothel: Izo (voice of Yuki Nomura) is the facility’s samurai yojimbo, a brooding sort who keeps a shock of emo-bangs hanging low, to cover up facial scars and his missing eye. A bitey-scratchy-feisty young elf girl named Sonya (Shion Wakayama) is snatched and thrown in a cage at the brothel, and one assumes this is a form of human trafficking. Nice place you got there!

The High Courtesan, Chihaya (Maaya Sakamoto), takes Sonya under her wing to be her personal assistant, and things seem OK for a minute. We learn that Chihaya was the source of the world-altering pillar of light, which happened because she’s an elf with a magic wand, known as a “bright.” Nobody else can use a wand, because I think it’ll instantly explode your pancreas or melt your spine or something. Suddenly, a raid! Orcs and goblins bust in and smash peoples’ heads to bloody gloop. Izo slashes a few to gory death before facing off against a brute of an orc named Raiden (Daisuke Hirakawa). Fire begins consuming the brothel. Chihaya is killed. Raiden is moved to quit being a bad guy by Sonia’s plight, and they form an uneasy alliance with Izo. The three of them escape, Sonia carrying Chihaya’s magic wand, and don’t quite realize that the evil jerks want the girl, one assumes for that very reason.

Raiden promised to take Sonia to a special elf land where she can live free. Turns out, Raiden is a gentle soul in a big, smelly brute of a body. Izo, however, is still a glum ol’ poop, and we learn why in a couple of moody flashbacks. Their plan to go to elf nirvana doesn’t go as planned, of course, because like a bird needs to fly and a fish needs to swim, violence needs to happen in movies like this. Things happen, many of them violent of course; we also meet a few additional characters, most importantly some white men who seem to control everything, because don’t they always, as well as a fellow who’s best described as The Exposition Centaur. Oh, and there must be thematic ties to the Bright movie, so something something Shield of Light etc. etc. the Dark Lord, and I’m not sure how many of us are going to be invested in this.

What Movies Will It Remind You Of?: The Animatrix begat Blade Runner Black Out 2022 begat Altered Carbon: Resleeved begat The Witcher: Nightmare of the Wolf begat Star Wars: Visions begat Bright: Samurai Soul begat, hopefully, Hubie Halloween in the Age of Enlightenment.

Performance Worth Watching: Raiden’s big-and-dumb-but-actually-sweet-and-smart dynamic is the movie’s most intriguing closest-thing-to-a-character-arc arc, I guess.

Memorable Dialogue: “I failed to die. Because of that, I’m on borrowed time.” — Izo isn’t much of a man of words (and the screenwriter may not be either)

Sex and Skin: None.

Our Take: Samurai Soul looks terrific — its flattened 2-D CG animation is crisp and detailed, with lovely color shading and fluid, almost floaty movement. And it’s better than Bright, which isn’t saying a lot, because that movie is pretty much the opposite of chocotastic.

Beyond that, I wish I had some more nice things to say. The plot clods along like chunks of the screenplay are missing, and comes together with the annoying hand of destiny (read: the screenwriter) feeding us contrivance and coincidence; see also, Roger Ebert’s Law of Economy of Characters. The dialogue is klutzy. It’s extremely gory for a TV-14 rating. Bland sketches are passed off as characters. Izo’s man-of-mystery story is a dud, and we never feel emotionally involved with any of these people. Its greater relevance in the Brightiverse — well, is anyone concerned about its greater relevance in the Brightiverse? All that visual artistry in the service of a big fat Who Cares? I scratch my head.

Our Call: SKIP IT. The film’s eye-pleasing aspects can’t overcome its narrative problems. They forgot to put the soul in Bright: Samurai Soul.

John Serba is a freelance writer and film critic based in Grand Rapids, Michigan. Read more of his work at johnserbaatlarge.com or follow him on Twitter: @johnserba.