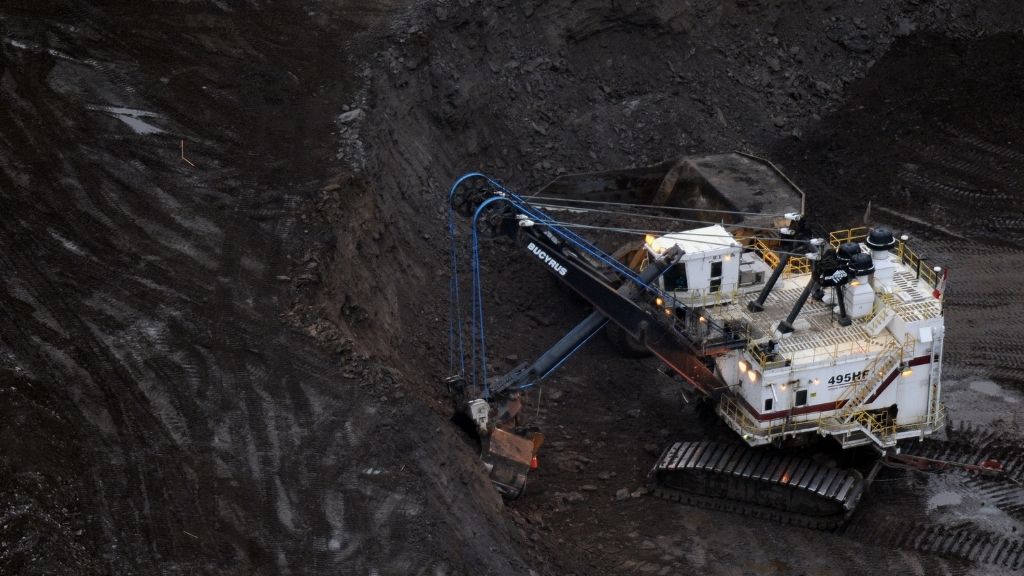 A large excavator loads a truck with oil sands in a mine in Alberta Province, Canada in October 2009.
(Image credit: Getty / MARK RALSTON / AFP)

Nearly 60% of the world’s oil and methane gas reserves and 90% of its coal reserves must remain in the ground by 2050 in order to meet the climate goals set by the Paris Agreement, a new study finds.

Leaving these fossil fuel reserves untouched would give the world a 50% chance of limiting the increase in global average temperatures to 2.7 degrees Fahrenheit (1.5 degrees Celsius) above preindustrial levels, according to the study, published Wednesday (Sept. 8) in the journal Nature.

“If we want a higher chance of staying below 1.5 C, then we have to, of course, keep more carbon in the ground, more fossil fuels in the ground,” study co-author James Price, a research associate at the University College London (UCL) Energy Institute, told reporters at a news conference Tuesday (Sept. 7).

“I think this is a very important study” in that the work lays out, in concrete terms, what it really would take to meet goals set by the Paris Agreement, said Maisa Rojas, a co-author of the United Nations Intergovernmental Panel on Climate Change’s (IPCC) Sixth Assessment Report and a climate scientist at the University of Chile, who was not involved in the new study.

“This is what it means — that there is a lot of fossil fuel that we cannot extract,” Rojas said.

In 2015, parties to the Paris Agreement pledged to limit the increase in global average temperatures to well below 3.6 F (2 C) above preindustrial levels. Ideally, they aim to limit the increase to less than 2.7 F; limiting warming to this degree would slow, or even stop, some of the impacts of climate change that we’re already seeing unfold, Live Science previously reported.

But to meet these goals, models suggest that the world should ideally reach net-zero carbon dioxide (CO2) emissions by 2050. That means major changes need to be made right away, according to a report the IPCC released last month. In the first installment of its Sixth Assessment Report, the IPCC concluded that if average global temperatures continue to rise at current rates, we’ll soon surpass an 2.7 F increase and hit 3.6 F of warming above preindustrial levels by 2050.

“Achieving global net zero CO2 emissions is a requirement for stabilizing CO2-induced global surface temperature increase,” the IPCC report authors wrote. How do we reach net zero? The new Nature study highlights a critical step: We must cut the amount of fossil fuels we pull from the ground.

“We believe our new paper adds further weight to recent research that indicates the global oil and fossil methane gas production needs to peak now,” first author Dan Welsby, an energy and environment researcher at UCL, said during the news conference. Specifically, the authors found that global oil and gas production needs to decline at an average annual rate of around 3% through 2050.

“For oil, this is a significant increase [from what] was found by a previous UCL study,” published in 2015 in the journal Nature, Welsby noted. That study found that, to prevent global average temperatures from rising by more than 3.6 F, about a third of oil reserves, 50% of gas reserves and more than 80% of coal reserves would need to remain in the ground.

The new study also suggests that, “for coal, all regions need to have already reached peak production,” Welsby said. On a somewhat promising note, studies suggest that global coal production already peaked in 2013, the authors noted. To meet the targets set forth in their paper, current coal production rates would need to fall by around 6% per year through 2050, Welsby said.

Related: 10 signs that Earth’s climate is off the rails

These estimates come with a degree of uncertainty, Price noted at the news conference. For example, as temperatures rise, carbon released from melting permafrost could cause ripple effects in the carbon cycle, the process by which carbon atoms move between reservoirs on Earth. These kinds of shifts can make plants less efficient at pulling CO2 out of the atmosphere through photosynthesis, meaning efforts to limit fossil fuel production may need to ramp up in order to compensate, Rojas said.

In addition, the authors’ climate model assumes that, each year, a certain amount of carbon will be sucked out of the atmosphere by carbon dioxide removal technologies. “However, there is substantial uncertainty as to whether these largely unproven technologies can be deployed as quickly, and at the scale required,” Price said. The world’s largest CO2-sucking plant opened in Iceland just this week, but in general, experts agree that these pricey technologies are not a viable replacement for cutting CO2 emissions on the front end, Gizmodo reported.

Given these uncertainties in the model, “the bleak picture painted by our scenarios for the global fossil fuel industry is very probably an underestimate of what is required,” the authors wrote in the Nature study. “As a result, production would need to be curtailed even faster” than predicted.

But given the IPCC’s latest report, can fossil fuel production and demand be curtailed dramatically enough that we avoid a global temperature increase of 2.7 F by 2050?

In reality, “it may well be the case that we’ll surpass 1.5 degrees globally, around midcentury,” Price said. But in anticipation of the third installment of the IPCC’s Sixth Assessment Report, which will address strategies to mitigate warming, “much of the modeling that goes on there will assume some overshoot above 1.5 degrees, and then we’ll return to 1.5 degrees at some stage in the second half of the century,” he said. In other words, even if the warming were to exceed 2.7 F at some point, efforts to rein in fossil fuel extraction now would still pay off in the long run.

“Really, what the future will look like will depend … on our decisions today,”  Rojas told Live Science. “This will all really depend on policies.” These policies should include initiatives that both restrict fossil fuel production and reduce demand on the consumer side, study co-author Steve Pye, an associate professor of energy systems at the UCL Energy Institute, said at the news conference. For instance, moratoriums on production and bans on new exploration could curb fossil fuel extraction, while steep carbon pricing could target the consumer side, the authors wrote.

In this vein, Denmark and Costa Rica recently entered an agreement to phase out their domestic oil and gas production, and international agreements like theirs could be key to success on a global scale, Pye said. Of course, countries whose economies rely heavily on fossil fuel production will face the greatest challenges in decarbonizing, and ideally, international partners would help to support them through the transition, he said.