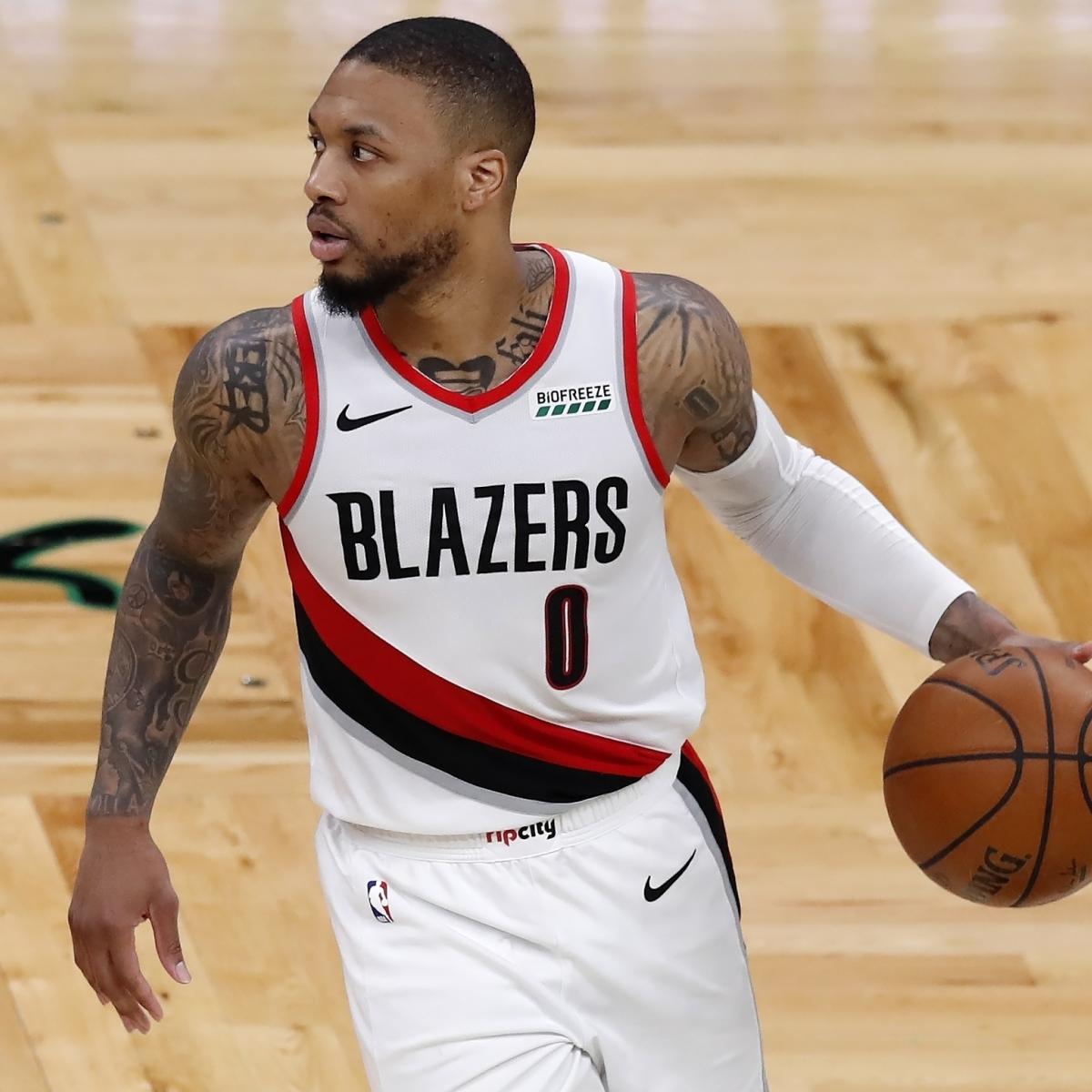 It’s the phrase that pays in the world of NBA fake trades, forcing the observer to think critically—or, if the trade involves their favorite team, perhaps irrationally—while weighing the proposed swap’s return against its cost.

Ideally, these theoretical exchanges allow both sides to walk away feeling like winners.

That’s the aim here with the following four off-the-grid trade ideas capable of reshaping the basketball landscape this summer.

If the Sixers can’t find the “All-Star-caliber player” they’re reportedly seeking in a Ben Simmons swap, per The Athletic’s Shams Charania, it will put a fascinating spin on the trade talks. Could they really bring him back after Joel Embiid and coach Doc Rivers singled him out in the wake of their second-round loss to the Atlanta Hawks? Or might Philly prove willing to lower its asking price?

The Spurs should hope it’s the former. They’re looking for a way out of the NBA’s midsection, a desire that has made Dejounte Murray and Derrick White “gettable,” per The Athletic’s Zach Harper. San Antonio might see centerpiece potential in Simmons and trust its famed developmental program—especially legendary shooting coach Chip Engelland—to bring the best out of 2016’s top pick.

Assuming San Antonio moves on from veterans DeMar DeRozan and Rudy Gay in free agency, there wouldn’t be a lot left in the Alamo City around Simmons. But that might be a good thing. His unique combo of defensive versatility, premier playmaking and severe shooting limitations could require an entire roster be tailored to his skills.

That’s a lot of work, perhaps more than 72-year-old coach Gregg Popovich is willing to stomach. But if it’s in the best interest of the franchise’s future, that should be enough to get the skipper’s approval.

While Philly would be moving forward as a one-star squad, the whole could wind up greater than the present sum of its parts.

Murray is a brilliant defender who can find shots for his teammates, and while he has his own issues from distance (career 33.2 percent), at least he’ll look at the basket from there (3.0 attempts per outing in 2020-21). White does a little of everything at both ends of the floor. Devin Vassell has obvious three-and-D abilities, plus the potential to add some off-the-dribble offense to the mix.

Sixers fans probably won’t love this package, because they’re losing the best player and not bringing back a household name. But if the incoming trio proves a better complement to Joel Embiid than Simmons has been, Philly fans could eventually get behind this.

The Warriors have until now and next season’s opening tip to construct a title contender around Stephen Curry, Draymond Green and Klay Thompson.

They might need to aim bigger than their current “Plan A,” which Connor Letourneau of the San Francisco Chronicle reported is “to package the Nos. 7 and 14 selections for a starting-caliber player in his prime.”

A “starting-caliber player” is helpful, but Golden State could need more. Moving up a tier would require a bigger asset—in this case, James Wiseman instead of the No. 7 pick—but the return is greater.

Christian Wood’s versatility looks like it was built for the Bay. He can function as both a rim-runner and a floor-spacer, which could add new, dynamic options to the club’s high pick-and-rolls. He’d put yet another gravitational pull on defenders, which would give Curry and Thompson more room to operate and open up slashing lanes for Green and Andrew Wiggins.

Adding Eric Gordon to the swap would give Golden State a proven shot-creator to lead the second team. If the 32-year-old can put his recent injury problems behind him (63 appearances the past two seasons combined), he would inject the bench mob with a fiery three-point shot, slithery off-the-dribble attacks and some secondary playmaking.

Houston, meanwhile, would get a clearer blueprint for its post-James Harden rebuild.

The Rockets would pair this season’s No. 2 pick with last year’s (Wiseman) to lay their long-term foundation. Gaining an extra lottery pick would bring another high-upside prospect to the fold, while the sign-and-trade for Kelly Oubre Jr. would net them a 25-year-old, two-way swingman to either add to the core or cash in on the trade market at a later date.

Damian Lillard hasn’t demanded a ticket out of Portland (yet), but he left his options open for the future.

“Right now, I’m not sure what I’m going to do,” Lillard said, per Aaron Fentress of The Oregonian. “What I can say is my intentions and my heart has always been set on being in a Trail Blazers uniform for my entire career. But I think over time, you want to win it all. I want to win it all in a Trail Blazers uniform. But we all have to be making strides toward that.”

On the surface, that’s a clear directive to the front office to improve his supporting cast. But Portland’s lack of assets make that difficult (which we’ll examine in a different deal), to the point the team—or he—could decide a blockbuster trade ending his tenure with the Blazers is the only way to proceed.

If that happens, the Raptors should be ready to place an aggressive bid to get him.

His downtown daggers, aggressive attacks and perpetually improving playmaking—his last two seasons are his best in assists per game—could single-handedly get Toronto a top-10 attack. Pascal Siakam has already proved how lethal he can be as a second option (second-highest scorer on the 2019 title team), and Chris Boucher could make Lillard’s life easier with his shooting and shot-blocking.

Add a re-signed Gary Trent Jr. to the mix and whomever Masai Ujiri can get for the fifth starting spot, and the Raptors could be right back in the Eastern Conference’s elite tier.

The Blazers would bring back a 27-year-old floor general in Fred VanVleet, a 24-year-old three-and-D ace in OG Anunoby (whose upside could push past the label’s normal limits) and a 23-year-old point guard in Malachi Flynn. The real draw, though, are those three first-round picks, highlighted by the fourth overall selection in next week’s talent grab.

Whether the Blazers deal Dame or not, they clearly need to do something.

“I think if you look at our team as it is going into next season, I don’t see how you can say, ‘This is a championship team, we just need a new coach,'” Lillard said, per B/R’s Sean Highkin.

Is Gordon Hayward a good enough get to appease Lillard? Who knows. But given Portland’s budget constraints—the club doesn’t have a pick in this draft and isn’t swimming in high-ceiling prospects—this might be the best the front office can do, especially since the swap doesn’t cost CJ McCollum.

The Blazers would still lean heavily toward the offensive end and need to scramble for answers at center, but a Lillard-McCollum-Hayward trio could be pretty special on offense. And if there’s a position to go the cheap route with in today’s game, it’s the center spot. Adding a rim-runner like Nerlens Noel or Khem Birch might suffice.

Re-sign Norman Powell, and Portland should elevate its ceiling in the end. If Lillard can see the light at the end of this tunnel, the Blazers will have aced this deal.

While Hayward helped the Hornets get their buzz back, they must view every transaction as a means to help maximize 19-year-old centerpiece LaMelo Ball. Not to mention, they have a glaring void to fill at the center spot with Cody Zeller and Bismack Biyombo both headed to free agency, and neither being a needle-mover in the first place.

Charlotte would add three frontcourt pieces here, each intriguing in his own right—and all at least four years younger than the 31-year-old Hayward. Jusuf Nurkic can anchor the interior on defense and add offensive value as a post scorer and secondary playmaker. Zach Collins, when healthy, provides paint protection and floor spacing. Nassir Little, a former UNC Tar Heel, lacks polish but has impressive physical tools.

Throw in a lightly protected future first-round pick, and the Hornets could see more value in this package than in a player who doesn’t fit their timeline.