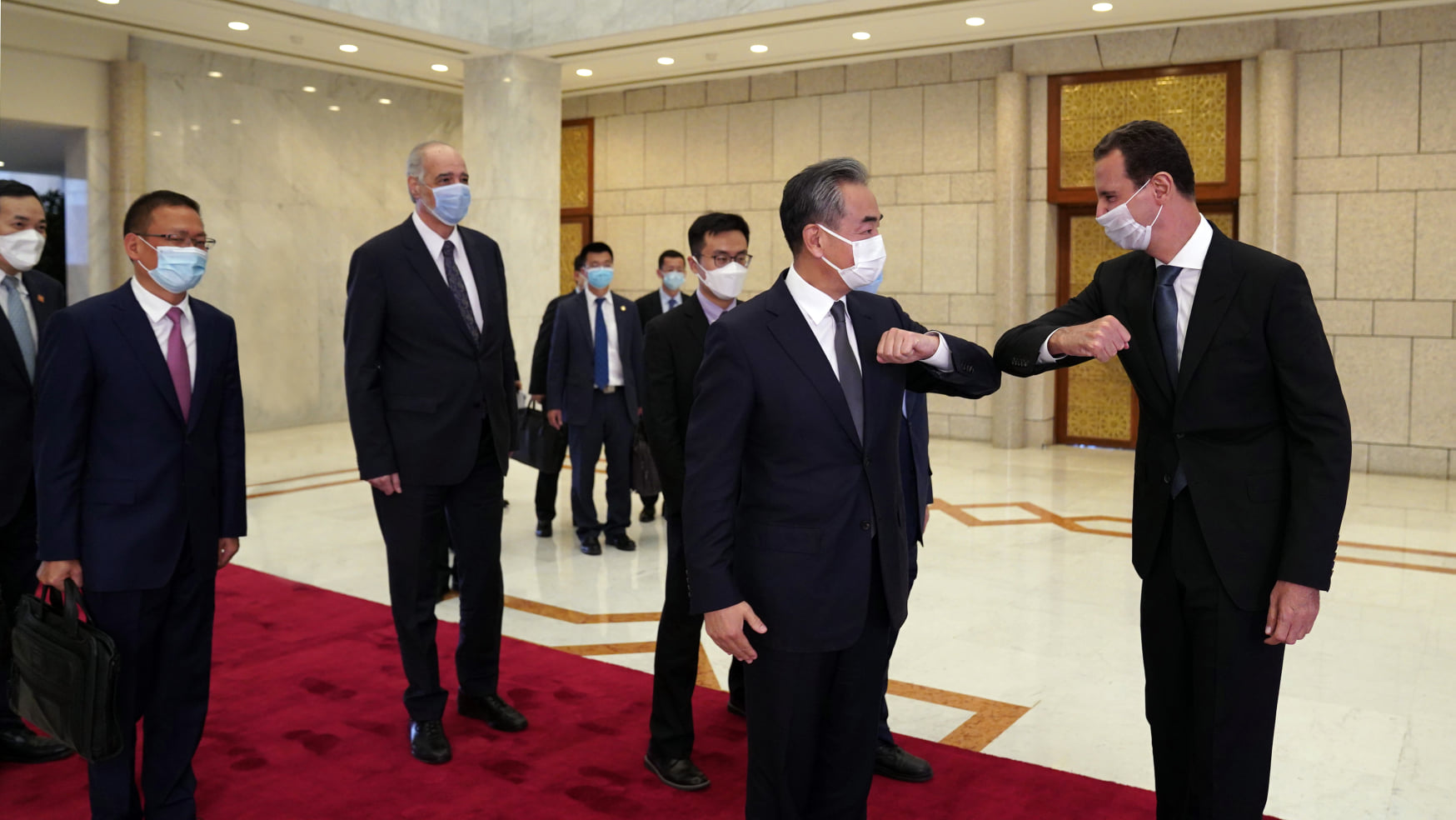 Syria has accused Israel of launching a new attack on the country shortly after China pledged additional support for the war-torn Arab nation that Beijing views as important for its economic footprint in the Middle East.

Following reports Monday of explosions in the country’s northwest, the Syrian Defense Ministry released a statement in which an official source said that “the Israeli enemy carried out an aerial aggression towards southeast Aleppo, targeting some sites in the Al-Safira area.”

“Our air defenses confronted the aggressor’s missiles and shot down most of them, and the results of the aggression are currently being checked,” the statement added.

Reached for comment by Newsweek, an Israel Defense Forces spokesperson said that “we do not comment on reports in the foreign media.”

The IDF has regularly carried out air raids against neighboring Syria, often targeting suspected positions linked to Iran, which has fielded partnered militias to support Damascus in its civil war against rebels and jihadis. Israel has accused these groups of setting up forward bases and transferring advanced weapons that threaten its own national security.

The Syrian government has also received directly military support from Russia, as well as economic support from China, whose top diplomat visited the country Saturday for the first time in two years.

In Damascus, Chinese Foreign Minister Wang Yi met with his Syrian counterpart Faisal al-Mekdadi and President Bashar al-Assad for discussions in which he emphasized Beijing’s willingness to shore up bilateral relations.

“During the meeting, it was agreed to move towards a new stage in strengthening these relations and opening wider horizons for bilateral cooperation in all fields to serve the interests of the two countries and peoples,” Assad’s office said in a statement following their talks.

The two sides also thanked one another for supporting their respective positions on domestic and international affairs, with Assad reaffirming his interest in Syria’s participation in the Belt and Road Initiative, an intercontinental network of investment projects spanning across much of the world.

Wang, for his part, was said to have “affirmed his country’s interest in Syria’s participation in this initiative due to its location and its important regional role, stressing his country’s continued support for the Syrian people in their war against terrorism and confronting the siege and inhuman punishments imposed on it and standing against interference in the internal affairs of the Syrian people and everything that affects Syria’s sovereignty and territorial integrity,” according to Assad’s office.

He also pledged China’s support to Syria in fighting the COVID-19 pandemic and rebuilding the country as it became further involved in the Belt and Road Initiative.

On a geopolitical level, Wang said that “China firmly supports Syria in opposing unilateral sanctions, alleviating its humanitarian dilemma and combating terrorist forces in any form” and “is willing to strengthen communication and cooperation with Syria to help the country improve its counter-terrorism capacity, and firmly supports Syria in playing a due role in regional and international affairs.”

While Beijing has stood by Assad since the beginning of the country’s decade-long civil war and has also fostered close ties with Tehran, China also has developed robust relations with Israel, which like its foes, has welcomed Belt and Road Initiative-related investments at sea in areas like the Haifa port and through land via the Tel Aviv “red line” metro project.

A report released earlier this month by the Israeli Ministry of Economy and Industry explored the potential of greater foreign direct investment between the two nations.

It described China as “one of the fastest-growing emerging markets in the world” and said the country “is striving for investments worldwide in various fields, mainly, mobile communications, artificial intelligence, information technology, healthcare & biotechnology.”

“China values of Innovation, strong business development and pioneering Technology,” the report concluded. “All those values are implemented in the Israeli business ecosystem and enhanced with strong R&D capabilities, leading Research institutions, and top-of-the-line high-tech industries. Upon these synergy point, both China and Israel can find common ground for mutual foreign direct investments.”

The cultivation of this relationship marks the result of a gradual shift in Beijing’s stance on the Middle East marked by China’s decision to establish relations with Israel in 1992. Prior to that, the ruling Chinese Communist Party had largely aligned with Arab powers and militias, including the Palestine Liberation Organization, which have collectively engaged in a territorial dispute with Israel since its 1948 establishment, a year before the People’s Republic was founded.

But nearly three decades later, China views a potential role not only in developing closer relations with Israel but also in potentially helping to mediate the long-running Israeli-Palestinian conflict.

As Wang made his way to Egypt on the second stop of his regional tour that was also set to include a visit to Algeria, he issued a statement Sunday proposing a plan to achieve a two-state solution acceptable for both Israelis and Palestinians.

“Lasting peace cannot be achieved without justice being its foundation. The establishment of an independent Palestinian state should not be delayed indefinitely, and the legitimate and lawful rights of the Arab people should not be ignored for long,” Wang said. “The ‘two-state solution’ is the only realistic path to resolving the Palestinian question. All parties concerned with the Palestinian question and the international community should make practical efforts to promote the ‘two-state solution’ on the basis of UN resolutions.”

He then put forth a three-point formula.

This first entailed greater powers for the Palestinian National Authority, whose rule has been fragmented and eroded since a 2007 split between the ruling West Bank-based Fatah and Gaza-based Islamist movement Hamas. The framework also involved supporting greater unity among the Palestinian factions and encouraging a resumption of direct negotiations between Israelis and Palestinians.

On this final point, Wang said that “Palestinian and Israeli negotiators are welcomed to conduct direct talks in China.”

“In the meanwhile,” he added, “China calls for the holding of an international peace conference led by the UN with the participation of the permanent members of the UN Security Council and all stakeholders in the Middle East peace process to seek a comprehensive, lasting and just settlement of the Palestinian question and to enable Palestine and Israel to co-exist in peace.”

Officials from the Palestine Liberation Organization and Hamas have both previously expressed to Newsweek an openness to China’s possible role in the conflict.

But Beijing’s growing role in the Middle East has prompted concerns from Israel’s top ally, the United States, which views China as its leading global competitor.

The U.S. has traditionally played a frontline role in attempts to settle the Israeli-Palestinian conflict but former President Donald Trump’s alignment with Israel led to the severing of ties between U.S. and Palestinian officials. His successor, President Joe Biden, has sought to reinstate ties to the Palestinian side to pursue peace based on a two-state solution.

In Syria, however, the Biden administration has continued to oppose Assad and has instead backed a largely Kurdish militia known as the Syrian Democratic Forces, which controls parts of northeastern Syria, where a number of U.S. troops are deployed against Damascus’ wishes.

White House Press Secretary Jen Psaki told reporters Monday that both the Israeli-Palestinian dispute and the war in Syria would be on the agenda as Biden met with Jordan’s King Abdullah II that same day in Washington.

“We expect that everything from Middle East peace, to security in the region, to Syria, to be points of discussion during the meeting this afternoon,” Psaki said.

This is a developing news story. More information will be added as it becomes available.