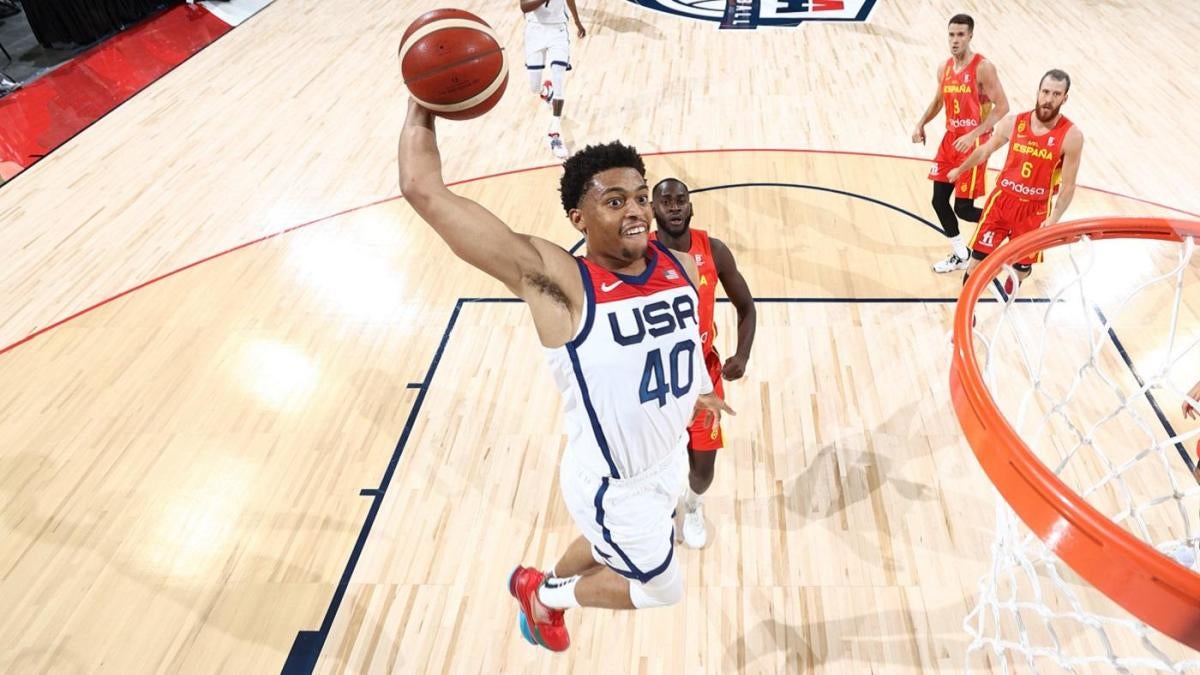 Team USA’s exhibition season hasn’t exactly gone as planned as the Olympic favorites have stumbled their way towards Tokyo with two upset exhibition losses to Nigeria and Australia. A win over Argentina seemingly righted the ship, but COVID-19 protocols deprived Team USA of Bradley Beal and a recurring calf injury also removed Kevin Love from the roster. With Khris Middleton, Jrue Holiday and Devin Booker still playing in the NBA Finals, the Americans looked to be in serious jeopardy less than a week before the opening ceremonies.

A final tuneup session against frequent Olympic rival and FIBA No. 2 ranked Spain gave Team USA the chance to right the ship, but a slow start threatened to shine an even brighter light on their struggles. Spain led for most of the first two quarters and took a 38-36 lead into the half behind strong performances from NBA stalwarts Ricky Rubio and the Gasol brothers, but Team USA came out with a renewed urgency in the second half thanks in part to one of its newest players.

San Antonio Spurs wing Keldon Johnson was only supposed to play for the Select Team when arrived in Las Vegas, but the absences of Booker, Holiday and Middleton forced Team USA to use him as a temporary replacement for their exhibitions. With Beal and Love gone, Team USA removed the temporary label and made Johnson a fully-fledged member of the roster. It was a surprising move given Johnson’s relatively low profile in the NBA, but the 21-year-old forward more than justified the decision on Sunday.

Johnson scored 10 points in the third quarter alone and 15 in the game as a whole on 7-of-9 shooting as Team USA ran away with an 83-76 victory in the second. His energy was infectious and helped spark Team USA’s lethal transition game against an older and slower Spanish roster. He trailed only Damian Lillard’s 19 points for the game, and when he was on the floor, Team USA outscored Spain by a team-high 18 points in less than 18 minutes.

“I’m out here to be that energy guy and bring light to the team whenever we need it,” Johnson said after the game. “Third quarter I came in and we needed a spark. I’m not just saying that because I got a couple of buckets, but just on the defensive end, talking and everything. Just trying to bring some kind of energy, some kind of spark so we can get over that hump.”

That energy will be necessary in the early stages of the Olympics. Team USA will make its debut in Tokyo on Sunday, July 25 against France, and if the Milwaukee Bucks and Phoenix Suns need all seven games to decide the NBA Finals, Booker, Holiday and Middleton may not be ready to play that quickly. Johnson is therefore likely to have a place in this rotation early on, and if Sunday is any indication, he’s going to continue to use it to showcase himself as one of basketball’s brightest young stars.