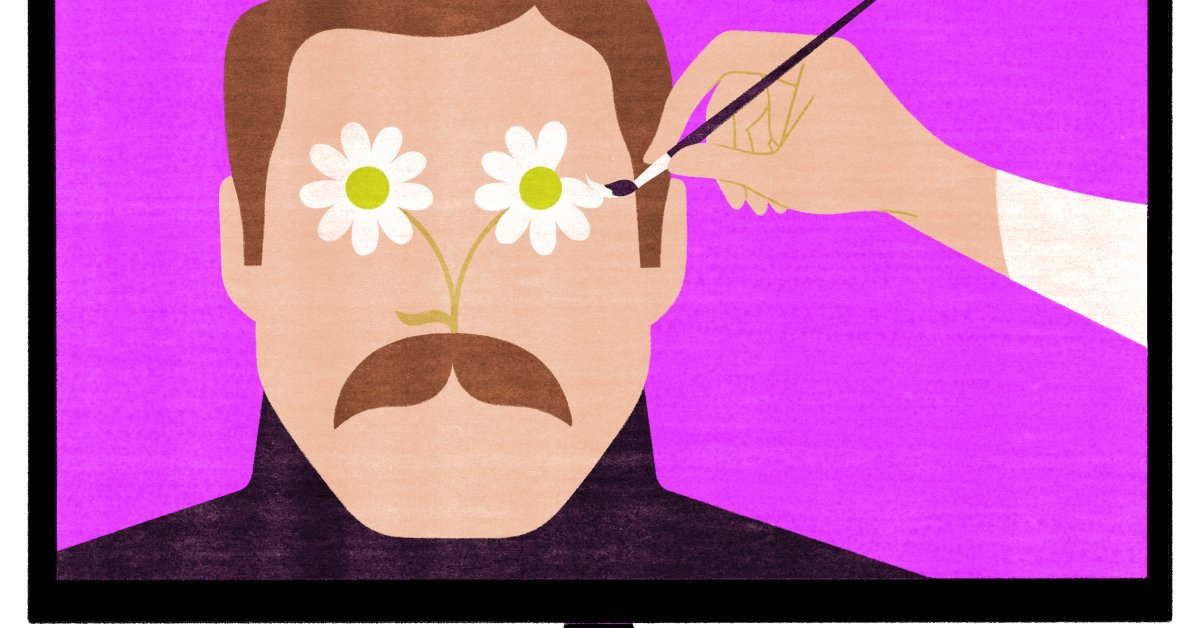 Ted Lasso was either TV’s most or least surprising breakout hit of 2020. On one hand, it was a sitcom adapted from a series of commercials and debuting on the relatively overlooked Apple TV+ platform. But it was also a sweet soccer comedy with a recognizable star, co-creator Jason Sudeikis, that arrived at a mid-lockdown moment when the demand for comfort viewing and sports content was surging.

The combination proved irresistible. Instead of disappearing on Apple TV+, it built word-of-mouth momentum to become the service’s first big hit. Sudeikis won a Golden Globe for his performance as an American-football coach imported to helm an English Premier League team, and the show recently scored 20 Emmy nominations. Fans, critics and awards voters all seemed to be responding to the show’s fundamental decency. Here was a comedy about a straight, white man’s man—immersed in the heterosexual, homosocial world of pro sports—who’s also thoughtful, nurturing, kind.

The crisis in male identity that has been escalating for the past half-century has had a profound effect on depictions of men in pop culture. For socially conscious creators, the increasingly common association of masculinity with misogyny and sexual misconduct presents a problem. How do you write a male character—especially one who’s straight, white and cisgender—who is likable, relatable and maybe even aspirational for the typical viewer who shares his identity, without making that guy odious to everyone who doesn’t?

Ted Lasso, which returns for a second season July 23, solves this by making its protagonist a sort of happy-go-lucky fantasy creature, the kind of magical role model usually confined to children’s stories. Ted is hardly the only idealized male specimen in entertainment made for grown-ups, of course, but I’ve never seen another fictional character who seemed so deliberately constructed to teach other adult men how to behave in the world.

In the NBC Sports promo that introduced him in 2013, Ted Lasso has been inexplicably summoned across the Atlantic to coach Tottenham Hotspur—despite his ignorance of the basics of soccer. After three days of cleat-in-mouth moments, he’s fired. Yet his goofy, quixotic, quintessentially American optimism earned the character a following.

A slightly different, even more endearing, version of Ted appears in the show’s pilot. This one isn’t stupid. He knows he’s likely to become the laughingstock of the sports world. He’s just positive enough to believe he can learn and secure enough to shrug off the ridicule. “Ted knows that he’s being insulted; he just knows that, ‘Well, they don’t know me well enough to really be talking about me,’” Sudeikis explained on Seth Meyers. “It doesn’t rattle him in the least.” Besides, Ted’s marriage is in trouble. Moving thousands of miles to coach the fictional team AFC Richmond is a way of honoring his wife’s request for space.

As the first season unfolds, his good qualities keep multiplying. A paternal figure to his players, he cares more about teamwork and good sportsmanship than winning. He’s jovial, culturally literate and enlightened on issues of social justice. A typical Lasso-ism: “You beatin’ yourself up is like Woody Allen playin’ the clarinet: I don’t wanna hear it.” He values the contributions of his staff and treats women with respect. In Season 2, we learn that he’s even a superlative lover. “So eager to please,” a satisfied one-night stand raves.

Surrounding Ted are deeply flawed people—mostly men. Season 1 finds hothead team captain Roy Kent (Brett Goldstein), once a powerhouse, past his prime and too defined by his past to imagine life after football. Star player Jamie Tartt (Phil Dunster) has a massive ego and a taste for bullying. His favorite punching bag is nebbishy equipment manager Nathan (Nick Mohammed).

Ted figures out how to get the best out of these men as players and as people. Over the course of that season, he pumps up Nate, who turns out to have great strategic insights. He benches Jamie to prove that bad behavior won’t fly even from a top goal scorer, before realizing the lad could use some fatherly TLC. Instead of taming Roy, Ted counsels him to harness his anger as an asset. Ted’s superpowers are traits more often associated with women: he listens to people, intuits what they need and cares enough to help.

Gandolfini as mob boss Tony Soprano in HBO’s The Sopranos.

Selflessness sets Ted apart most from so many other TV protagonists framed as epitomizing masculinity. In the late ’90s, The Sopranos ushered in the age of the antihero. Brilliant, flawed, messy if not outright violent characters like Don Draper, Walter White, The Wire’s Stringer Bell and Al Swearengen of Deadwood were men of action, not emotion. They would literally murder people, build meth empires or drink themselves into stupors instead of going to therapy. (Tony Soprano famously went to therapy but never stopped killing.) Their creators solved the problem of representing masculinity by making these characters terrible, enviable and internally conflicted all at once.

Comedy has seen its share of influential male antiheroes as well, from “social assassin” Larry David on Curb Your Enthusiasm to New Girl’s prickly, problem-drinker love interest Nick Miller. Lovable sitcom dads are harder to find in the 21st century, and might be altogether absent if it weren’t for a wave of uplifting shows featuring queer (Modern Family) or nonwhite (black-ish, Fresh Off the Boat) fathers. More enduring has been the neanderthal sitcom husband, forged in The Honeymooners, perfected by All in the Family and regurgitated in The King of Queens and Last Man Standing. The archetype remains so entrenched that it was recently satirized at length in AMC’s Kevin Can F**k Himself.

Yet Kevin couldn’t exist without a critical mass of viewers growing weary of the man-baby couch-potato stock character. It’s that same, younger audience that embraced Ted Lasso and his forerunners: the fantasy manly men who populate the gentlest contemporary sitcoms. Parks and Recreation gave us Nick Offerman’s Ron Swanson, a rugged libertarian who holds zero problematic views and is putty in the hands of strong women. Even in a pandemic-set reunion, Ron said nothing negative about what many real people with his politics saw as a mask-mandating nanny state. Consider, also, Johnny Rose (Eugene Levy) of Schitt’s Creek. This is a man who gained and lost a fortune without knowingly participating in any nefarious financial schemes; he’s not even incompetent. Resplendent in designer suits, Johnny embraces his downfall as a chance to spend more time with his family.

I enjoyed both shows, just as I enjoy Ted Lasso. But there’s something weirdly brittle about the way these characters are constructed. They’re simply too perfect, their personalities so meticulously designed to balance macho cred with sensitive masculinity that they can withstand no external pressure. Why is TV so desperate to create not just a good man, but the best man? Why, when Ted Lasso’s separation comes up, is the only explanation provided that his wife finds his optimism exhausting? Would the whole character crumble if, say, he was just a workaholic?

It might. Because, even in the early episodes of a second season that begins to delve deeper into his psychology, Ted isn’t a real person. He’s a role model, like Harry Potter or Mary Poppins or Superman. And there’s something depressing about how Ted, Ron and Johnny come off as teaching tools more than as funnier versions of actual men. It’s hard to address a crisis in masculinity when, as a culture, we can’t imagine what a decent, unexceptional guy might look like. No wonder the entertainment media has gone to such lengths in recent weeks to position Sudeikis as not just a nice person—which, by many moving accounts, he is—but a real-life Ted Lasso.

To the extent that TV mirrors society, the creation of positive male characters will be fraught for as long as the cluster of systemic ills known as “toxic masculinity” endures. Meanwhile, though, I’m not sure it helps to tie idealized male characters to traditionally masculine traits—the pro-feminist bootstrapper, the loving soccer coach. In many ways, this Good Man™ reminds me of another fantasy figure, the girlboss, whose female identity magically redeems attributes we associate with ruthless men. Isn’t it possible that gender essentialism is exacerbating things? Whether male, female or nonbinary, the characters we need most now may well be ones defined by anything but their gender.