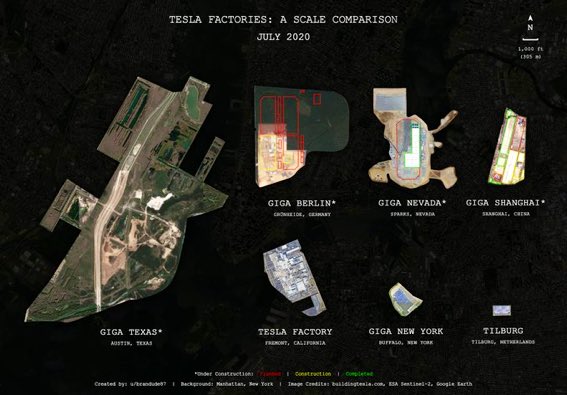 Tesla has surged as high as $1038 today on the news of $4.2 billion deal with Hertz. Hertz is emerging from bankruptcy and will buy 100,000 Tesla Model 3 and Model Y over the next 14 months. Hertz is buying at full price. Normally fleet sales involve discounts but Tesla has a backorder of about 500,000 cars worldwide. The backorder is now 600,000 cars.

Tesla is opening the Berlin and Austin factories at the perfect time as they need to ramp those new factories faster than the China factory. IF Tesla can make 3 million cars in 2022 they will be able to sell every one of them.

Tesla can also put some of its $16 billion in cash to do everything to expand the China and Fremont factories.

Tesla CFO said on the earnings call that Tesla was caught off-guard by the profound awakening in EV desirability.

15 European countries and China had over 10% market share for EVs in September, 2021. Norway is at 75% EV market share and it took the 6 years to go from 10% to 75%. About 30 million of the 87 million global cars are sold in Europe and China. Adding 10% per year in EV demand is another 3 million cars per year plus whatever happens in the US and the rest of the world.

Average new car selling prices have increased to about $45,000 in the US and used cars are at $30,000. There is a massive shortage of cars.

Who else is opening giant new EV factories this year instead of 2025?

SOURCES – Tesla, Greencar reports
Written by Brian Wang, Nextbigfuture.com (Brian owns shares of Tesla. Brian is not a financial advisor, do your own research talk to your advisors, this is not financial advice)