The 10 Best Dragon Movies of All Time 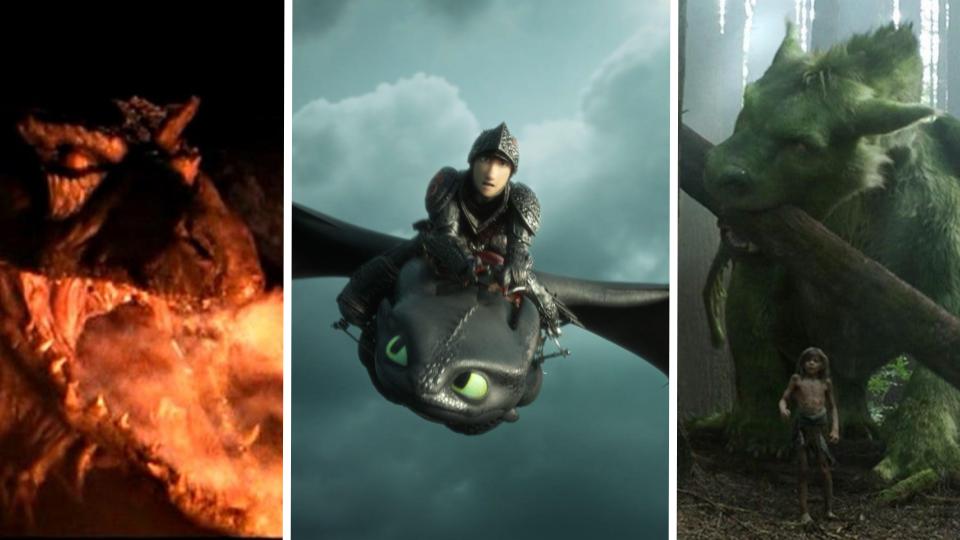 Dragons are and always have been a universal symbol in mythology and fantasy throughout most cultures around the world. Though each culture has their own version of what a dragon is, it is non-verbally agreed that a dragon is a large, serpent-like creature typically known for destruction, power, and often great wisdom. There are many adaptations of such folklore between games, shows, plays, and movies.

When one hears “Dragon Movie”, the expectation would be a movie about or centered around a dragon or many dragons. Going off of this assumption and despite how popular dragons seem to be in our culture, there just aren’t as many dragon movies out there as one might think. Due to this, some of the movies on our list today include dragons but may not be about exclusively about dragons. Nevertheless, read on to see our picks for the best dragon movies of all time.

Top Dragon Movies of All Time

Starting off the list with the least dragon-y movie, Maleficent is Disney’s call back to the villain from the 1959 classic Sleeping Beauty. As the story goes, princess Aurora (Elle Fanning) is taken and put to sleep by Maleficent (Angelina Jolie) as revenge for past betrayals. The strange difference between the original and this new, re-imagining is that Maleficent never actually turns into a dragon, she instead uses her magic to transform Diaval into various creatures, one of which being a dragon near the end of the movie.

Another on this list where a dragon is more of a cameo is Spirited Away, a magical tale from Hayao Miyazaki that delves into many, varied Japanese myths of old. Determined to save her parents from being turned permanently into pigs, Chihiro (Daveigh Chase and Rumi Hiiragi) must traverse a fantastical land of spirits, witches, and other mystical creatures. While the white dragon styled after Japanese folklore in this movie is not the main focus, it becomes a pivotal aspect to the plot and the protagonist’s arc.

While the movie may not be centered around the character, Falkor the ‘Luck Dragon’ from The Neverending Story is too unique a dragon to leave out. Seemingly around for the sole purpose of providing luck, Falkor helps Atreyu (Noah Hathaway) along in his journey to save Fantasia from The Nothing. Despite Falkor receiving limited screentime, our hero wouldn’t have gotten far without him in the story. Other than that, Falkor is far and beyond one of the most famous and talked about aspects of this entire movie.

A remake of the original 1977 version of the same name, Pete’s Dragon is a heartwarming tale of a boy and his best friend. When Elliott (Oakes Fegley) is orphaned at a young age by a car crash in the middle of the forest, he meets and befriends a camouflaged dragon that he names Pete. The film is a lot like Tarzan meets the plot of The Iron Giant, and while all the devices of this story may be derivative, they work surprisingly well for the movie.

Based off the highly acclaimed young adult book series of the same name, Eragon is the first movie on this list that is mostly about dragons. A young farm boy stumbles upon a dragon egg in his homeland of Alagaesia, beginning a journey of good vs evil as Eragon (Ed Speleers) defends his land with the help of his dragon companion, Saphira. While the film features multiple dragons that make it quite exciting and good for some dragon action, it is generally not advised to read the books before watching this one.

Though fairly corny due to dated visual effects and very average acting skills, Dragonslayer is a classic, fantasy-filled adventure worth any dragon movie fan’s time. A young wizard’s apprentice (Peter MacNicol) is forced to take on his master’s mission to free a nearby kingdom from a dragon when the superior sorcerer meets his untimely end. As the oldest movie on our list, it’s guaranteed a spot for its bold and creative choices that make it less corny than it could’ve been in 1981.

In the second installment of The Hobbit trilogy, The Hobbit: The Desolation of Smaug is a wonderful adventure set in Tolkein’s Middle Earth that expands on the cinematic universe with gusto. Continuing on their three-movie journey, Bilbo (Martin Freeman) and his traveling party of Dwarves must now penetrate the Lonely Mountain to take back Erebor from the wicked dragon Smaug. Unique to this list, this is the only movie that actually has the name of the dragon in the title. Smaug is also exactly what one might expect from a dragon: greedy, clever, curious, and territorial.

See our guide on watching Lord of the Rings movies in order.

Likely the best action movie on our list today, Reign of Fire takes the dragon movie concept to a very modern setting in an exciting and sometimes terrifying way. Found accidentally in a very deep mine in 2020 England, a dragon emerges and immediately scorches the earth, beginning a new era of predator and prey. Starring Christian Bale, Matthew McConaughey, Izabella Scorupco, and Gerard Butler, the acting is great, the concept is original, and the effects are appropriate for its time making it an exceptional dragon movie.

One of the more heartfelt – albeit corny – movies on this list, Dragonheart features another talented cast of characters that turns a expectedly cheesy 90s movie into a better-than-expected dragon movie. A dragonslaying knight named Bowen (Dennis Quaid) is forced to team up with the last remaining dragon to defeat an evil king, one who was once Bowen’s apprentice. Unlike other dragon tales, this dragon (voiced by Sean Connery) is much more sophisticated and patient, only causing damage to property, livestock, or other dragonslayers by accident, necessity, or self-defense. There’s also a pretty endearing chemistry between Bowen and his new friend Draco, taking on an almost buddy-cop energy that brings about some charming jests.

An endlessly charming and heartwarming dragon tale, How to Train your Dragon is an unexpectedly clever and enjoyable animated movie that combines coming-of-age with fantasy in a great way. A young, aspiring dragonslayer named Hiccup (Jay Baruchel) happens upon an extremely rare type of dragon never seen by human eyes, resulting in an unlikely friendship that could change the entire lifestyle of the Viking-era dragon hunters. As the best dragon movie on our list, it is chock-full of many different dragon types as well as explanations and lore-diving for each one. Other than being a great dragon movie, this is also just a great movie in general, adding to the many top-tier animated titles we’ve been blessed with over the years.

Looking for more movie lists like this? Take a look at our guide to the best shark movies or dive into how to watch the Godzilla movies in order.