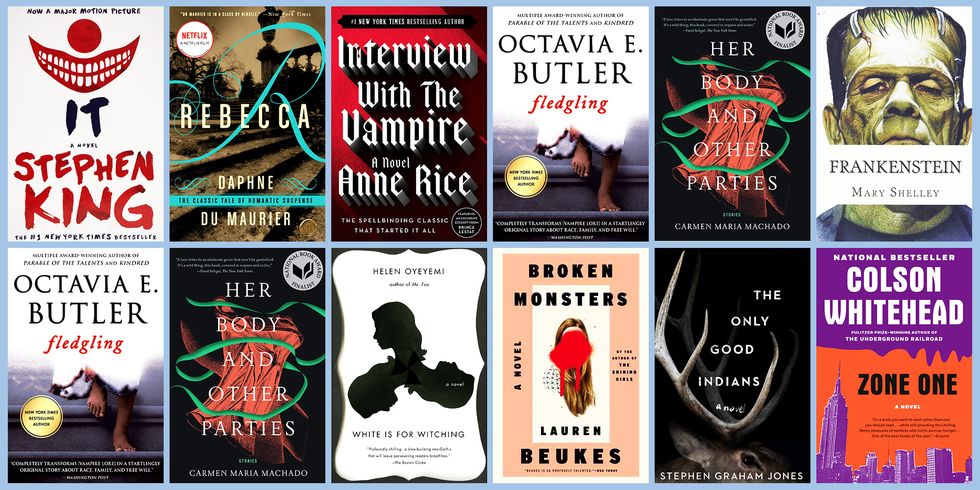 If you want to be scared out of your skin this fall, haunted hay rides and terrifying movies aren’t your only choices. Have you considered delving into the hair-raising world of literary horror? The genre has been terrorizing audiences since the ancients wove demons, monsters, and ghosts into their folklore; now, it’s a lively literary sector haunted by figures both supernatural and frighteningly real. We’ve chosen more than a dozen of our favorite tales to get you started, which feature all the fright night mainstays you know and love, from witches to zombies to killer clowns—plus terrors you’ve never even dared to imagine.

As jam-packed with the occult as these novels may be, contemporary horror isn’t just about things that go bump in the night. Through the prism of genre conventions, today’s horror novels reflect the all-too real horrors of our world back at us. From racism to misogyny to sexual predation, these novels prove that the scariest evils are the ones we live with every day, not the monsters animating our nightmares. Read on, if you dare, for a spooky season syllabus that will keep you thinking long past Halloween. (And if you don’t, fear not, our best books of 2021 list brims with offerings for all sorts of moods.)

It’s April 1997, and four hopeful contestants have made it to the final room of the Quigley House, a “full contact” haunted escape room in Lincoln, Nebraska. If they can endure the home’s six cells of ghoulish horror without shouting “reprieve,” they’ll win a substantial cash prize, but not everyone will make it out alive. When a man breaks into Quigley House and murders one of the contestants, Reprieve sifts through its characters’ back stories and witness statements to solve the crime. Mattson crafts a nail-biting horror saga while also implicating us in our sick obsession with horror. So too does the novel evoke blistering social horror, forcing us to reckon with how racism, prejudice, and complicity are more horrifying—and more fatal—than anything that goes bump in the night. Unrelenting and unforgettable, Reprieve is an American classic in the making.

A Cosmology of Monsters, by Shaun Hamill

H.P. Lovecraft meets Stephen King in this spooky debut novel about a family of haunted house proprietors who are terrorized across generations by monsters—and not the hokey jump-scare kind. Hamill has crafted an ambitious, spellbinding horror novel for the ages, one where the looming specters of ambition, obsession, and loss are every bit as terrifying as the flesh-and-blood monsters themselves.

The Haunting of Hill House, by Shirley Jackson

If you’ve seen the Netflix series of the same name and haven’t read the source material, described by many as the greatest haunted house story ever written, it’s past time to dive into The Haunting of Hill House. In this seminal classic, written by the queen of creep, four seekers arrive at the dilapidated Hill House, where spooky phenomena abound, to participate in a parapsychological study. Jackson’s genius lies in the linkages she makes between haunted houses and haunted minds, which crescendo into an unforgettable ending. Whether you’re a first-time reader or a dyed-in-the-wool Jackson fan, The Haunting of Hill House remains a master class in horror fiction.

Set in Mexico circa the 1950s, Mexican Gothic opens with an alarming letter: newlywed Catalina writes in desperation to her cousin Noemí, claiming that her husband is poisoning her, and that “fleshless things will not let me go.” Glamorous and tough Noemí travels to High Place, the countryside home of Catalina’s new husband, Virgil Doyle, to investigate. There she encounters the “essentially macabre” Doyle family: English aristocrats who colonized the mining town where High Place is situated, and their frightening patriarch, a dastardly eugenicist. Plagued by frightening visions of ghosts and violence, Noemí plots to make her escape with Catalina, but High Place won’t let them go so easily. In this dreadful and spellbinding novel, Moreno-Garcia delivers Gothic horror at its finest, with a brilliant layer about the scourges of racism and colonialism.

What can be said about Frankenstein that hasn’t been uttered a thousand times over? Shelley’s landmark work of Gothic horror revolutionized our understanding of artificial life, bewitched generations of readers, and pioneered science fiction as we now know it. Whether you’ve read Frankenstein before or you’re picking up the novel for the first time, there’s always something wondrous to discover in this strikingly original story of monstrosity, morality, and destruction.

In this mind-bending novel from the always-extraordinary Butler, we meet Shori, an injured young amnesiac who soon awakens to the reality of her identity: she is, in fact, a genetically modified vampire. Unlike her bloodsucking brethren, Shori has dark skin, which enables her to walk in the sunlight. As Shori investigates who she is and who tried to kill her, Butler transcends the vampire genre to ask uncomfortable questions about its mythology. Why must so many vampires be white? Why do we romanticize the violations of consent that vampires commit against their victims? You’ll never read a vampire novel the same way again after digesting Fledgling.

White is for Witching, by Helen Oyeyemi

In a haunted bed and breakfast on the cliffs of England, there lives a teenager named Miranda Silver, who suffers from a hereditary eating disorder that compels her to eat chalk. Along with her widowed father and her twin brother, Miranda operates the bed and breakfast, but this is no ordinary old house: inside these walls live Miranda’s maternal ancestors, a long line of malevolent women who exercise their xenophobia on guests in frightful and fatal ways. When Miranda falls in love with a Black woman, the house goes to violent lengths to end the romance, teeing up a deliciously dark fairy tale about racism, hatred, and grief.

Zone One, by Colson Whitehead

After a zombie pandemic decimates American life, separating humanity into the living and the living dead, who cleans up the wreckage? In Zone One, we meet the janitors of the undead: “sweepers” like Mark Spitz, who are tasked with taking out zombie stragglers to prepare Manhattan for resettlement. Whitehead’s foray into zombie thrillers delivers gallows humor and nightmarish gore in spades; at the same time, this post-apocalyptic elegy for the modern world elevates the genre to new heights.

Interview with the Vampire, by Anne Rice

Interview With the Vampire, considered by some scholars as the most significant work of vampire literature since Bram Stoker’s Dracula, is a downright fantasia for lovers of literary horror. This is the story of Louis du Pointe du Lac, an 18th-century plantation owner who becomes a vampire at the fangs of radiant but mercurial Lestat. When eternal life grows lonely, Louis and Lestat turn an orphaned girl into their undead companion, but the ramifications of condemning an adult woman to eternal life as a child spin out across continents and decades. In this first of fourteen books in the series, Rice crafts a sensual fictive dream of immortality, sex, and power, all of it evoked in luscious prose.

“Last night I dreamt I went to Manderley again.” With this iconic opening line, Du Maurier thrusts us into the spooky world of Rebecca, a ghost story haunted by an unseen ghost. When a nameless young woman marries the wealthy widower Maxim de Winter, the newlyweds head to his ancestral estate of Manderley, where they aim to make a new life together. The second Mrs. de Winter soon finds her life dominated by Rebecca, Maxim’s late wife, whose memory looms forebodingly large around the estate’s every corner. As the second Mrs. de Winter pieces together her predecessor’s secret history, the obsession drives her to the brink of madness, making for an otherworldly psychological thriller you’ll never be able to shake off.

The Only Good Indians, by Stephen Graham Jones

In this eerie, slow-burning horror novel, four young members of the Blackfeet Nation break with long-held tradition by trespassing on hunting grounds reserved for tribal elders, where they slaughter a herd of elk. A decade later, their hubris comes back to haunt them, with a vengeful spirit hunting them down one by one to exact its gruesome revenge. Gory, haunting, and ultimately hopeful, The Only Good Indians explores what it means to navigate the world as an Indigenous man, where guilt, shame, and grief are part and parcel of life not just for those who leave the reservation, but for those who stay.

Her Body and Other Parties, by Carmen Maria Machado

In this bewitching collection of short stories set at the intersection of fantasy and fabulism, Machado’s enduring subject is the violence visited upon women’s bodies. In “The Husband Stitch,” Machado offers a gruesome reimagining of the familiar fairy tale about a wife who refuses her husband’s pleas to remove a green ribbon from her neck. In “Real Women Have Bodies,” a prom dress shop becomes the site of a horrifying discovery about women who’ve disappeared into the dresses’ seams. Sensual, strange, and disturbing, these bravura stories brew up a provocative potion of horror, fantasy, and science fiction.

It, by Stephen King

To choose the most horrifying among King’s dozens of spooky novels is an impossible task, but here at Esquire, killer clowns won the race. Set in King’s beloved Derry, Maine, It follows the hair-raising adventures of the Losers Club, a self-styled posse of pre-teen misfits who band together to defeat a sadistic killer clown disguised as their worst nightmares. Juxtaposed against this cosmic villainy are myriad human evils, many of which are arguably more insidious than Pennywise: child abuse, sexual predation, and racism, just to name a few. Come for the creature feature that shaped a generation of monstrous clowns to come, but stay for King’s magnum opus of memory, enduring trauma, and the indelible bonds between children.

Broken Monsters opens with a dead body, but not just any dead body: the upper body of a boy, affixed to the lower half of a deer. Detroit detective Gabriella Versado has seen freakish murders before, but her obsessive quest to track down this disturbed killer will demand everything from her. In this polyphonic story with five narrators, we meet spellbinding characters, like the desperate crime reporter willing to do anything to get an exclusive scoop, and the unhoused man wrapped up in the case while fighting to keep his family safe. Tense and deeply creeptastic, this story of intertwined lives and urban decay proves that Beukes is an unstoppable force in the horror genre.