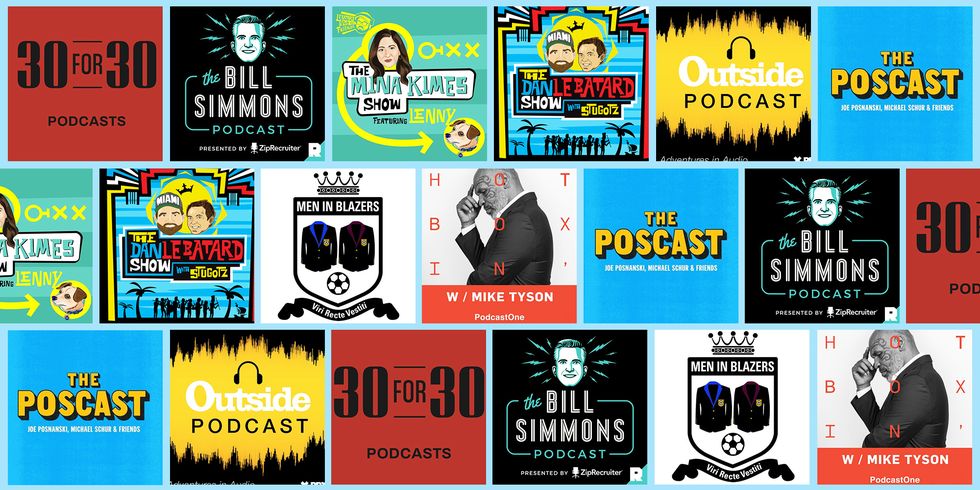 Have you already forgotten the Dark Times? After March 2020, when sports ceased to exist, the NBA putting on a H-O-R-S-E tournament felt like it was the damn Super Bowl. We had to turn to The Last Dance, one of the best docs of the year, to feel the thrill of a buzzer-beater again. When sports finally returned, we had empty stadiums—save for stands filled with stuffed animals and cardboard cutouts, which 22nd-century historians will surely raise their eyebrows at.

Thankfully, sports are finally close to something resembling normal. Which means, you know, that you have to keep up with sports again. Watch the games. Catch SportsCenter at night. And, of course, queue up a few sports podcasts while you’re running errands. Lucky for you, there’s never been more—in terms of sheer quantity—sports pods to listen to, covering everything from baseball, to hoops, to the occasional foray into our larger culture. We sifted through the sea of talking heads to present you with the best of the best.

Too much for you? Don’t make us remind you of the Cinnamon Toast Crunches of Marlins Park.

Like baseball? How about The Good Place? Turns out, the creator behind your favorite shows—Parks and Recreation, The Office, and yes, The Good Place, included—has his own sports podcast. Billed as a “sort of sports show but not really,” The Poscast hits the sweet spot of feeling like you’re in a room talking sports with your friends, as great (and sometimes maddening) as that can be.

Of course, you already know that Mike Tyson is one of the greatest boxers who ever lived. That’s a given, even if you’re of the age where you mostly know him from his cameo in The Hangover. You should also know about the next act of his career—which sees him as a truth-digging podcaster. Hotboxin’ with Mike Tyson will have you hanging on every word, whether it’s an interview with a sports great (Sugar Ray Leonard) or just someone you’d really want to hear from (Waka Flocka Flame).

That’s What She Said with Sarah Spain

If you’ve become a fan of Sarah Spain’s standout turns on ESPN’s Around the Horn, then let us introduce you to That’s What She Said with Sarah Spain. You’ll find must-listens on what’s going on in our increasingly complicated world of sports (see recent episodes on mental health) and interviews with the likes of Becky Hammon and Billie Jean King.

What else is there to say about The Bill Simmons Podcast? It’s the antidote for anyone who can’t listen to two hours of sports talk, but still wants to leave with enough literacy to say they follow sports. With everything from Bachelor recaps to celebrity interviews thrown into the mix of guessing gambling odds, you’ll probably find that The Bill Simmons Podcast is the sports-culture-and-everything-else pod that you’ll keep coming back to.

In our post-Ted Lasso world, we Americans could try a little harder to get into the great game of soccer—er, football. Might we suggest pairing that first foray into La Liga with a first listen of Men in Blazers? Hosts Roger Bennett and Michael Davies will make you feel like you tripped and fell into an English pub, screaming at the game.

ESPN’s 30 for 30 Podcasts has done what likely felt impossible when it was first conceived: Distill the beauty, immediacy, and attention to detail of the long-running TV series to a podcast. Start with The King of Crenshaw, which explores how the death of rapper Nipsey Hussle impacted the NBA, and work your way back.

After browsing through seven sports podcasts, you at least need one that’s not all about sports, right? Give Moments with Candace Parker a spin, where you’ll hear the newly-minted WNBA champion (!) talk about parenthood, relationships, money, and more.