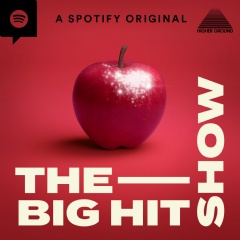 What makes something a cultural phenomenon? Is it the people involved or the topics covered? Or does it just have to have that special je ne sais quoi? The Big Hit Show, a new podcast from Spotify and Higher Ground—President Barack Obama and Michelle Obama’s media company—is setting out to examine the rise and enduring power of global sensations.

This new podcast looks at a moment where a title made it big across mediums—film, music, TV, internet culture, and video games. Each topic gets its own “chapter,” with each chapter spread out over five episodes. “The shows and films and albums we explore have all been chosen not just because they’re massive pieces of popular culture. We’ve picked them because each has had a profound butterfly effect on our culture,” said host Alex Pappademas.

The first chapter of the podcast will highlight Twilight, the four-book teenage vampire series that became a global phenomenon and eventually inspired a movie franchise. To understand fans’ love for the saga, just look at Spotify, where listeners have made more than 1.3 million Twilight-themed music playlists. The movies’ soundtracks have also seen quite a bit of play time, from Muse’s “Supermassive Black Hole – Twilight Soundtrack Version” (almost 310 million streams) to “Bella’s Lullaby” (almost 18 million streams).

Now, nearly two decades after the first book’s release and 13 years since the first movie premiered, The Big Hit Show will explore this unlikely success story as well as the power of teenaged girls and the rise of fan fiction.

In the second chapter, which debuts in February, Alex will explore the musical styles of American rapper Kendrick Lamar—and specifically, the effects of his album To Pimp A Butterfly. The music that won Kendrick a 2016 Grammy for Best Rap Album was born out of his grappling with personal tragedy and the world around him. Since 2015, the album has seen more than 1.5 billion streams on Spotify, and every year it has remained in the top 1,000 of the most streamed albums on the platform.

“Whether we’re tracing how an author’s vivid dream about a sparkly vampire led to an entirely new fan culture or how a megastar reckoning with success, expectation, and survivor’s guilt crafted a masterpiece that became the soundtrack to the biggest protest movement in a generation, listeners will know from chapter to chapter they’re getting a high-stakes narrative that explains how our culture has been influenced and shaped by these creations,” explained Alex.

After dissecting Twilight and To Pimp A Butterfly, the show will continue its deep dive into pop-culture phenomenons. Follow the podcast to find out which topic it will cover next.

Athletic Greens is the premier sponsor of season one of The Big Hit Show. Dive into the first chapter on the Twilight phenomenon, below.