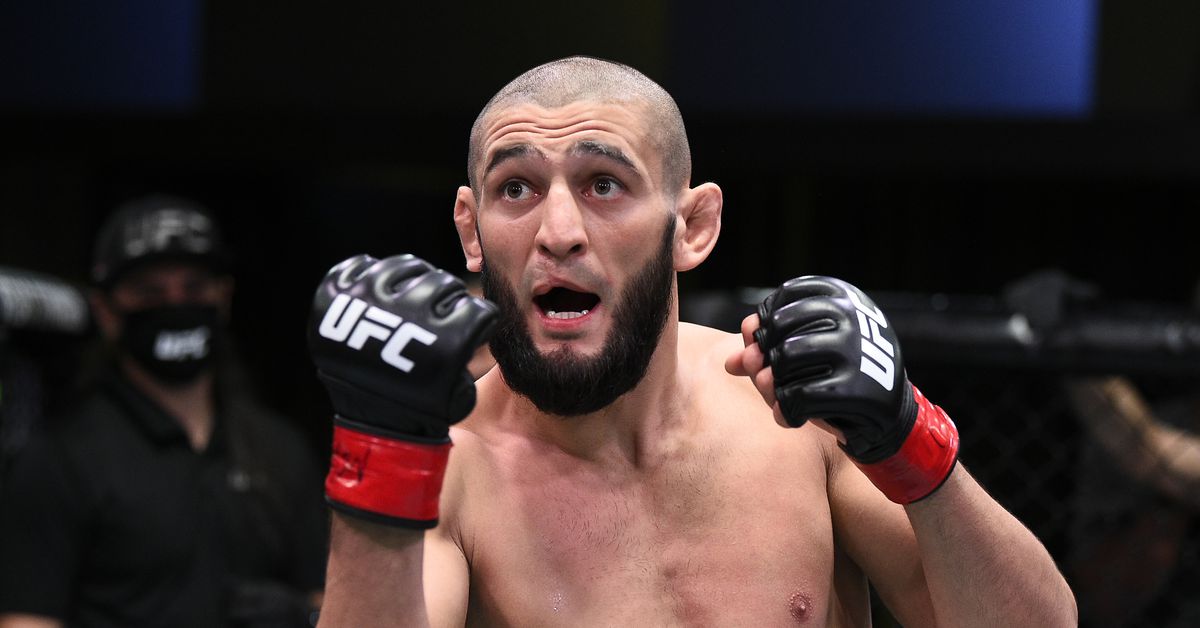 Khamzat Chimaev was the biggest thing in the UFC from mid-July 2020 through mid-September 2020. Chimaev fought three times during that span and scored three stoppage victories in two weight divisions.

Chimaev’s run had Daniel Cormier declaring, “In 2021, Khamzat Chimaev is the double champ, 170 and 185 (pounds). I love (UFC middleweight champion Israel Adesanya) but he goes up and down, he fights everybody. After what I saw. . . this spaceship is going to the moon. . . He’s got a great philosophy, he’s got a great mind for fighting, he’s got all the physical ability to dominate two weight classes, dude is the real deal.”

Cormier was not alone in his praise. UFC president Dana White was also taken in by Chimaev, “We were sitting in here this morning trying to figure out what we think is next,” White said. “If you ask this kid, he’s ready to fight (UFC welterweight champ, Kamaru) Usman. You know what I mean?

“Is he ready for Usman? The way he looks, who knows? Maybe.”

The UFC tried to book the Chimaev vs. Edwards scrap a third time, but lingering COVID-19 symptoms prevented Chimaev from competing. Things were so serious at one point that Chimaev announced he was retiring from the sport via social media.

I want to say thank you to everyone for their support in my path in this sport. I think I’m done. Yes, I know that I didn’t take the belt, but this is not the most important victory in this life. It may upset you, but my heart and body tell me everything.

I want to say thank you so much. @ufc #allhamdulillah

White chalked up the retirement announcement to emotion. Chechen dictator Ramzan Kadyrov also had an opinion on Chimaev’s statement, “I told him that ALL Chechens were upset by this news. I reminded Chimaev that the youth, whom he inspires, are pinning their hopes and expectations on his success…”

In March, Chimaev announced his return to the UFC via social media.

In April, Chimaev’s manager, Ali Abdelaziz set a timeline for Chimaev’s return to the octagon, but he did so with some restraint.

“Realistically, I think it’s time to slow it down a little bit, but I think he’s going to make a (bigger) statement on the comeback. He’s going to keep climbing. He’s a special talent. He’s a superstar, I believe, in the making. All of us will see.

“Everyone who understands MMA will understand what Khamzat brings. It is what it is, and we have to move on. Sickness can’t control that.”

In July, reports surfaced that Chimaev would face Li Jingliang at UFC 267. Jingliang is coming off a January first-round knockout win over Santiago Ponzinibbio. The finish earned Jingliang his sixth UFC fight-night bonus. Jingliang is the No. 11 ranked fighter in the official UFC welterweight rankings. Chimaev is unranked.

In March, Chimaev spoke about his recovery.

“I was doing good at first then they told me that I could start cardio training. And I felt sick again,” he explained. “I went to the bathroom and started coughing up blood. That just messed up my mind a bit.

“Honestly, it scared me… Cancer? Like, ‘I’ve been sick for so long, why doesn’t it go away?’ Different thoughts were going through my mind. Plus, I was alone there in Las Vegas, struggling to overcome it all.”

“Some people die because of that disease. But I didn’t. I am still here, unfortunately for my opponents.”

Despite his illness, Chimaev is one of the biggest favorites on the UFC 267 fight card.

I don’t think the UFC was reckless in booking Chimaev against a tough opponent like Jingliang, but the promotion and fans might want to temper their expectations regarding Chimaev.

From the sound of things, Chimaev did not have a mild case of COVID-19. In February, he told his manager he thought he was going to die. While in December, Abdelaziz said the fighter’s lungs had not recovered 100 percent from the virus.

I don’t know if there is trepidation about how Chimaev will look when he returns at UFC 267, but there should be.

The concern about myocarditis in athletes returning from COVID-19 has dropped from early in the pandemic when the fear was that as many as 1 in 5 people who tested positive for COVID-19 could have heart inflammation, but that number has not dropped to zero. As such, someone like Chimaev, who struggled mightily, should undergo the battery of tests that (at least) 789 other pro athletes underwent before returning to action after a positive COVID-19 diagnosis.

Those athletes, who, according to ESPN, play football, men’s and women’s basketball, baseball, soccer and hockey, underwent an electrical test of their heart rhythms, a blood test that checks for heart damage and a heart ultrasound. Thirty of those athletes showed an abnormality that led to a cardiac MRI. Of those 30 athletes, five showed heart inflammation that kept them from competing.

White recently bragged about the UFC’s commitment to safety, but the promotion did not respond to Bloody Elbow’s question if Chimaev would undergo similar cardiac testing before UFC 267.

The UFC serves as its own commission in locations lacking an athletic commission. When the promotion does this, it usually follows the guidelines established by the Nevada Athletic Commission. According to the Association of Boxing Commissions website, Nevada does not require an EKG for a fighter under 36. In August 2020, the NSAC told Bloody Elbow, “NSAC is familiar with the various protocols for professional athletes. At this time there is no plan to change our protocols for Closed System Events/Bubble. We continue to follow the science behind COVID-19 and will consider changes accordingly,” when asked if additional testing would be implemented.

Chimaev might be fine and 100 percent ready to fight, but without a thorough examination of his heart, no one can be sure how fit he is to compete. That’s worrisome.