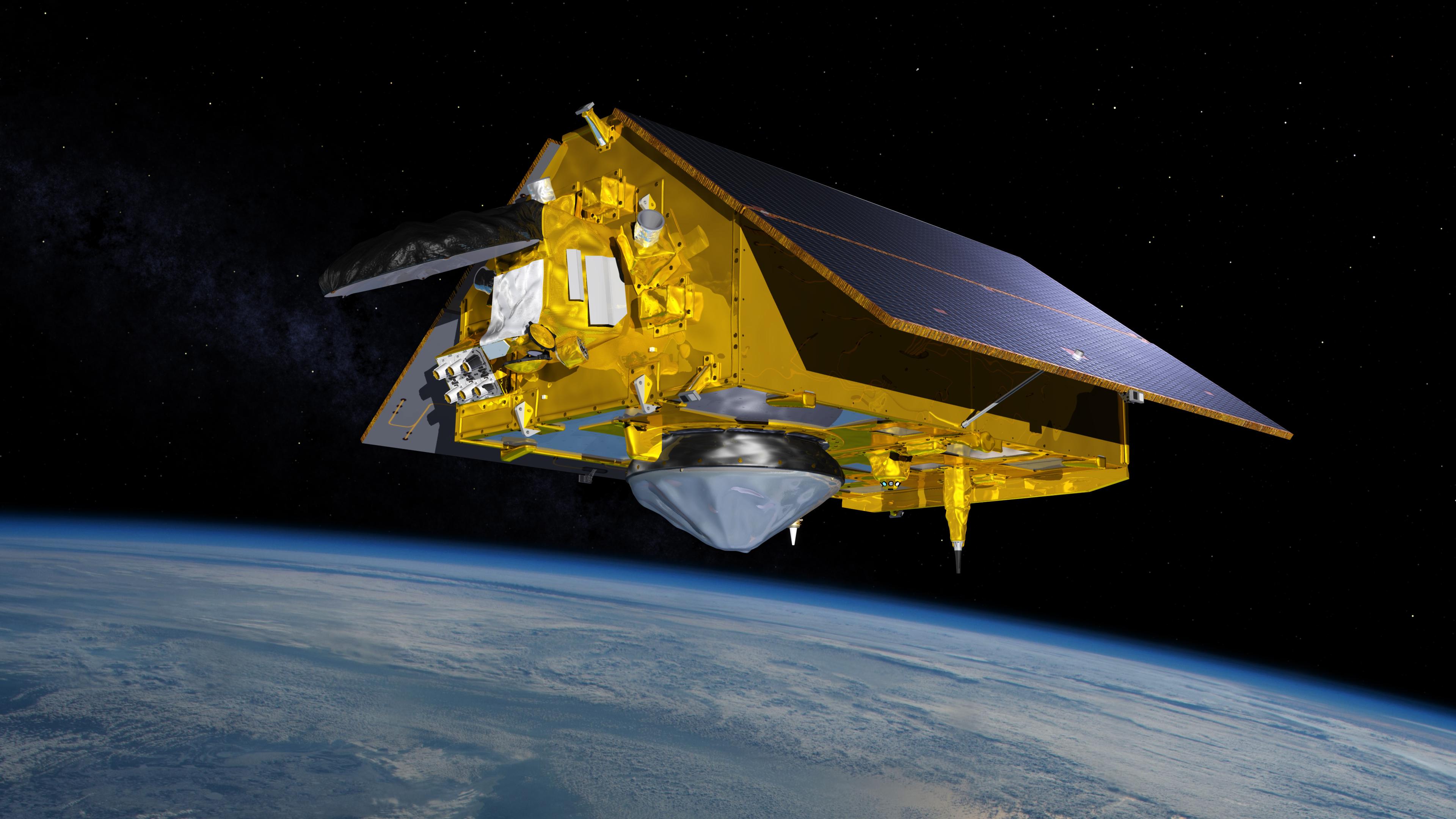 An artist’s depiction of the Sentinel-6 Michael Freilich satellite in orbit around Earth.
(Image credit: NASA)

The Copernicus program is a project run by the European Union (EU) and European Space Agency (ESA) that builds and manages a fleet of Earth-observing satellites called Sentinel. Eight missions have been launched to date, providing data about changes occurring to the oceans, land and atmosphere of our planet.

Copernicus was created in 1998 when EU officials signed the Baveno Manifesto, a document proposing that Europe play a major role in handling worldwide environmental and climate issues, in Baveno, Italy, according to a history from the EU. The program was originally known as Global Monitoring for Environmental Security (GMES) and was intended to provide information that could help humanitarian aid, peacekeeping tasks, and border surveillance, along with environmental concerns.

In 2004, ESA agreed to create a space-based component of GMES that would include the Sentinel family of satellites. The program was renamed Copernicus in 2011 after the Renaissance-era Polish astronomer Nicolaus Copernicus who first proposed that the Earth orbited around the sun, according to the program’s website, which writes this about the decision:

“Copernicus opened man to an infinite universe, previously limited by the rotation of the planets and the sun around the Earth, and created an understanding of a world without borders. Humanity was able to benefit from his insight. This set in motion a spirit of discovery through scientific research, which allowed us to understand better the world we live in.”

ESA deployed the first Sentinel satellite, Sentinel-1A, in 2014 to continuously create radar images of our planet’s surface. Other satellites in the Copernicus program take high-resolution photographs of land, provide air quality data, and measure the composition of our atmosphere, according to an overview from the agency.

The most recent Sentinel, Sentinel-6A, was launched in 2020. It provides extremely precise measurements of sea level rise across the globe.

Data from Copernicus is provided freely to scientists all over the world. The program cost €3.24 billion ($3.83 billion) between 2014 and 2021, according to ESA.

Here we take a look at each of the Sentinel missions individually.

This mission consists of two satellites, Sentinel-1A and Sentinel-1B, both of which orbit from pole to pole around the Earth taking radar images of our planet day and night and during all kinds of weather, according to ESA. The two satellites orbit on opposite sides of the Earth, covering the entire planet every 12 days, according to the agency.

Sentinel-1A launched in 2014, followed by Sentinel-1B in 2016. Both satellites rode a Russian Soyuz rocket to orbit from Europe’s spaceport in French Guiana during their launches. Sentinel-1A was hit by a millimeter-size particle — perhaps a piece of space debris — in 2016 that caused a sudden small power reduction, though the satellite continued to operate normally afterwards.

Sentinel-2A and Sentinel-2B are twin satellites that launched in 2015 and 2017, respectively, atop Vega rockets from Europe’s spaceport near Kourou, French Guiana. Each satellite captures high-resolution images of our planet, helping officials monitor the world’s forests, changes in agricultural cover and other land-based activities.

Both Sentinel-2 craft are about 11.2 ft (3.4 m) long and weigh 2,513 lbs. (1,140 kg). The two satellites orbit from pole to pole, separated by 180 degrees along their orbital path, which allows the pair to maximize their coverage of Earth

In 2018, Sentinel-2A captured a glimpse of a rare snowfall in the northwest part of the Sahara Desert during a winter storm, where some areas were covered in up to 15 inches (40 centimeters) of snow. And both Sentinel-1 and Sentinel-2 satellites have been used to watch enormous icebergs break off from Antarctica.

The Sentinel-3A and Sentinel-3B satellites launched to orbit in 2016 and 2018, both using the Russian Rockot rocket from the Plesetsk Cosmodrome in northern Russia. Like Sentinels 1 and 2, the Sentinel-3 probes are in polar orbits, and monitor a variety of Earth processes, including sea surface height, sea ice temperatures, ocean surface wind speeds, atmospheric aerosols, vegetation on land, and snow and ice coverage on land, according to the Copernicus program.

The Sentinel-3 satellites are each 12.8 ft (3.9 m) long and weigh 2,535 lbs. (1,150 kg). Over the years, the mission has captured important data about hurricanes in the Atlantic Ocean as well as wildfires in Siberia and the aerosols they produced.

Sentinel-4 and Sentinel-5 are upcoming missions that will monitor atmospheric composition, but neither has launched yet, according to ESA. In the meantime, the agency launched the Sentinel-5P satellite, a precursor to track global air pollution and make detailed maps of air quality around the world every 24 hours, in 2017 using a Russian Rockot launch vehicle from the Plesetsk Cosmodrome.

Sentinel-5P is 4.6 ft (1.4 m) long and weighs 2,160 lbs. (980 kg), according to an informational website for the Copernicus program. The satellite was one of several that recorded drops in emissions around the world during the coronavirus outbreak in 2020.

The Sentinel-6 mission will eventually consist of two satellites, the first of which, Sentinel-6A, launched in 2020 using a SpaceX Falcon 9 rocket from California’s Vandenberg Air Force Base. A collaboration with NASA and the U.S. National Oceanic and Atmospheric Administration, Sentinel-6A is also known as the Jason CS satellite, and was renamed in honor of oceanographer Michael Freilich, the former head of NASA’s Earth Science division.

Sentinel-6A is uses a radar altimeter to monitor global sea-surface height alterations related to climate change with unprecedented accuracy. It is 16.7 ft (5.1 m) long and weighs 2,628 lbs. (1,192 kg). The Sentinel-6B satellite will join its companion in 2025, according to NASA.

The EU is studying six additional high-priority future missions as part of the Copernicus program, which would plug current monitoring gaps and look at vegetation, surface temperatures, polar ice, carbon dioxide levels and sea-surface salinity, among other things, according to ESA.

Adam Mann is a journalist specializing in astronomy and physics stories. His work has appeared in the Wall Street Journal, Wired, Nature, Science, New Scientist, and many other places. He lives in Oakland, California, where he enjoys riding his bike. Follow him on Twitter @adamspacemann.