The Cowboys choked in the clutch 5 times vs. 49ers in NFL playoffs

Home /Sports/The Cowboys choked in the clutch 5 times vs. 49ers in NFL playoffs 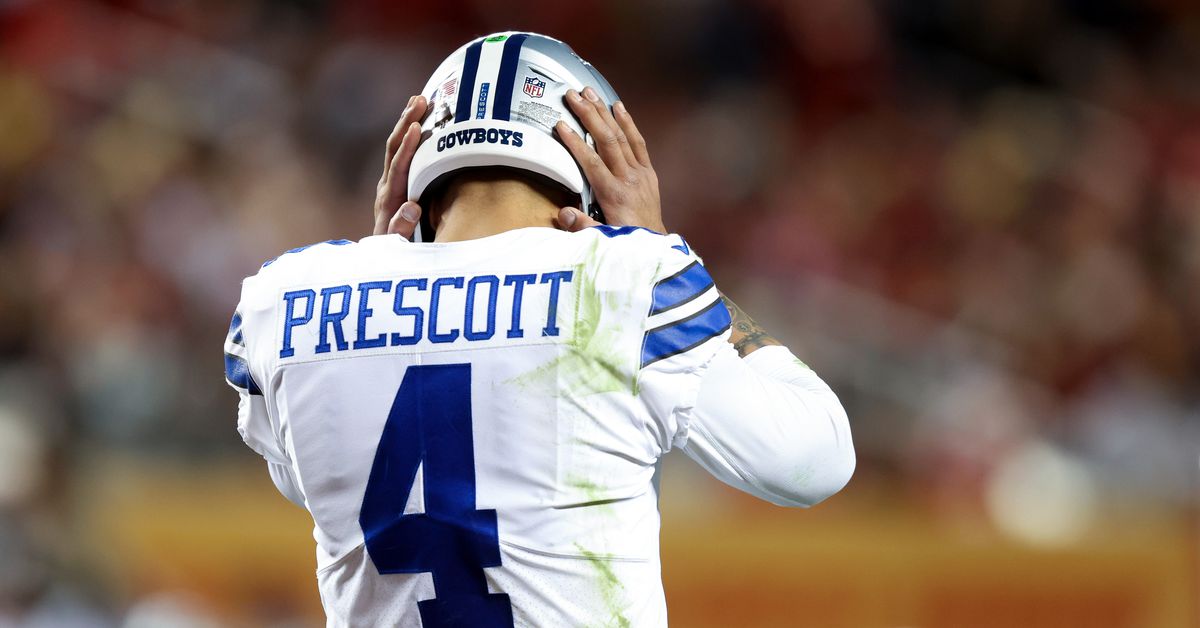 Usually, the pain of your favorite team losing a playoff game is enough for any fan. But what about when your team’s season ends via a string of seriously unfortunate plays that cause the entire NFL fan base to participate in a joint facepalm?

Well, that’s exactly what happened to Dallas Cowboys fan across the country as they watched their club fall to the 49ers 17-12 on Sunday night.

For those who weren’t lucky to witness the events in real time, here’s a quick run down:

An ill-advised punt with 2:05 remaining in regulation

With 2:59 on the clock, the Cowboys had the ball first-and-10 at their 18-yard line. Two incompletions and a sack on Dak Prescott swiftly ended the Cowboys’ drive after just 59 seconds. Facing a fourth-and-10 with the game on the line, the Cowboys decided to punt the ball back to a 49ers offense that begs for the chance to run the clock out behind their talented stable of backs. They got the ball back with 45 seconds remaining nedding a touchdown to tie.

With a Surrender Index of 4.56, this punt ranks at the 86th percentile of cowardly punts of the 2022 season, and the 83rd percentile of all punts since 1999.

The Cowboys were lucky to get the ball back at all following their punt as 49ers running back Elijah Mitchell only needed to fall down in bounds on a first-down scamper to seal the game.

So, facing a 94-yard field in front of them, Prescott and his offense went to work…sort’ve.

On the first play of the drive, Prescott took the snap and escaped the pocket to his right, losing several yards of depth into his own end zone. As he neared the sideline, Prescott pumped the ball and proceeded to take a hit from defensive tackle Arik Armstead inside his own end zone. Miraculously, Prescott spun off and managed to get a pass off out of bounds.

Greg Olsen was all over the ruling to wind the clock on a Dalton Schultz catch.

“When you go out of bounds, you have to be going forwards if you are contacted by the defender… you’ve gotta turn up and be physical into contact and get that official to stop the clock.” pic.twitter.com/KmwR4Nh5Pq

On third-and-one from the Dallas 15-yard line, Schultz caught a short out route from Prescott before colliding with a 49ers defender and heading out of bounds. However, the game clock did not end up stopping once Schultz crossed the sideline.

It’s a rule many fans aren’t aware of, but a player MUST attempt to gain yardage after the catch while heading out of bounds to actually stop the clock. You have to be moving forward. The officials did not rule that Schultz attempted to move forward after the catch which caused the clock to continue winding down.

The failure to stop the clock ended up costing the Cowboys 19 precious seconds.

After an incompletion on the previous first down, the Cowboys faced a second-and-10 with 10 seconds left in the game. Prescott found Schultz once again for a 15-yard gain to stop the clock in range of a long throw. However, despite initially being ruled a catch, the officials overturned the call after review.

To everyone’s disbelief, Schultz simply did not drag his second foot in bounds on what certainly looked like any other routine catch you’d expect a player to make.

The incompletion left the Cowboys with 76 yards to go with only six seconds left.

So what does any team do in this situation? A Hail Mary, right?

Well, not if you’re the Cowboys.

Instead of lining up with five pass-catchers out wide for one last heave towards the end zone, the Cowboys lined up in an unorthodox formation that had running back Ezekiel Elliott lined up at center to snap the ball. With a combination of linemen and receivers lined up on either side of the formation, Prescott took the snap and fired a short slant to receiver KaVontae Turpin, who took an absolute shot by 49ers safety Jimmie Ward to end the game.

At the same time, Elliott never got a chance to make a play for his team as linebacker Fred Warner bulldozed him as soon as the ball left his hand.

For Cowboys fans, it was an incredibly-frustrating ending to another promising season. But to those outside the Dallas fan base, it was a poetic finale that perfectly encapsulated the Cowboys’ struggles on an otherwise exciting divisional round.

The last play in the Cowboys’ Divisional Round loss to the 49ers was an absolute disasterclass
Weege Show: San Diego SX Post-Race Recap